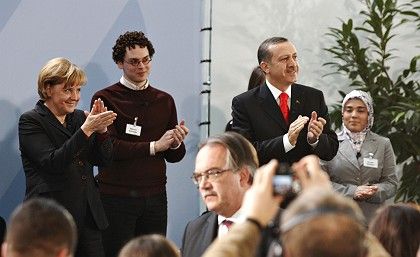 Turkish prime minister Recep Tayyip Erdogan was in Berlin on Friday for a discussion with the German chancellor and a group of German and Turkish students.

It certainly sounds like a nice idea, but the reality of national borders makes things a tad more complicated when it comes to actual educational systems. Hence Erdogan's suggestion that Germany should found Turkish-medium high schools and universities came as a bit of a surprise to German Chancellor Angela Merkel, who was also present at the question-and-answer session.

For immigrants to speak better German, Erdogan explained, they have to be able to speak their own mother tongue first. Turkish teachers and schools could help them along, he said. "The German government should have no problem with that," Erdogan said, adding that, "whatever needs to be done for integration, should be done."

Merkel reacted cautiously to the suggestion of sending Turkish teachers to Germany. German schoolteachers need to have "an essential openness to all students," she said, explaining that it was not necessary to have teachers from immigrant backgrounds to meet the needs of Turkish-German children.

However Merkel said she was open to another of Erdogan's recommendations, namely that social workers be assigned to cases involving immigrants from Turkey.

The Turkish prime minister has been in Germany since Thursday, when he visited the town of Ludwigshafen, scene of a recent tragic fire which killed five children and four adults, all of Turkish descent. The reason for the blaze remains under investigation, but there are speculations that the fire was caused by arson and may have been racially motivated.

After his visit to Berlin, Erdogan is expected in southern Germany on Saturday morning for the 44th Munich Conference on Security Policy, where he will deliver the day's opening speech.