An apartment fire in the southwestern German town of Backnang earlier this month has reignited fears of racist and xenophobic violence in Germany. The fire killed a mother and seven of her children, all of Turkish origin -- a fact that many in the Turkish community in both Germany and Turkey saw as too suspicious to be a coincidence.

Violence against foreigners in Germany is relatively rare, but it is not unheard of. In 1992, right-wing extremists firebombed two houses in the western city of Mölln, killing three people of Turkish original and injured others. And in 1993, an arson attack on a house belonging to a Turkish family in the western city of Solingen killed five members of it and injured several more. Four neo-Nazi skinheads were convicted for perpetrating the attack.

More recently, German authorities discovered that a three-member neo-Nazi cell calling itself the National Socialist Underground (NSU) had murdered nine immigrants and a German policewoman between 2000 and 2007. The country's patchwork of law enforcement and domestic security agencies failed to link the murders until late 2011, after two of the members had already committed suicide, instead focusing much of their investigation on relatives and acquaintances of the victims.

Turkey's ambassador to Germany, Hüseyin Avni Karslioglu, has been in touch with the authorities investigating the fire in Backnang. In an interview with SPIEGEL, he said the suspicion of xenophobic motives in the fire is entirely understandable -- and that Germany itself is partially to blame.

SPIEGEL: After the fire catastrophe in Backnang, you traveled to Baden-Württemberg and met with the relatives of the victims. What did you experience there?

Karslioglu: The grandmother asked me to accompany her to the mourning hall where her deceased family lay in state. She wanted to see her daughter and her seven grandchildren one last time. The mother had one of her dead children in her arms. I'll never forget those images.

SPIEGEL: The cause of the fire has not yet been explained, but there were immediate fears in the Turkish press that it could have been an attack like the xenophobic arson attack in Solingen. Where does this mistrust come from?

Karslioglu: It comes from past experiences. From hundreds of everyday instances of discrimination, xenophobic comments and attacks on property. I know from conversations that a collective trauma has emerged among people with Turkish roots in Germany -- a sense of not being safe -- after the arson attacks in Mölln and Solingen, and especially after the killing spree of the racist terrorist group the NSU.

SPIEGEL: Does the Turkish community feel sufficiently protected by the German state?

Karslioglu: The majority trusts the German authorities. But we get a large number of e-mails, calls and letters from people with Turkish backgrounds that result from a significant portion of them feeling worried, doubtful or skeptical toward their safety in Germany. The fact that it was almost exclusively Turkish people, even the families of the victims, who were the focus of the NSU murder investigations has led to serious disappointment and criticism in the Turkish community.

SPIEGEL: Do you personally trust the German investigators?

Karslioglu: Immediately after the fire, I traveled to Backnang with the state premier of Baden-Württemberg to gather information about the situation. I saw the intense efforts of the German authorities to shed light on the case. We have no reason to mistrust the authorities, who are continuing to pursue all directions in their investigation.

SPIEGEL: To what extent do Turks living in Germany feel threatened, particularly by right-wing extremists?

Karslioglu: After the discovery of the NSU murders alone, we noted about 100 attacks and threats on people with Turkish roots and their institutions. Premature statements, like ones made in Backnang, that these incidents have "no right-wing extremist or racist origin" don't inspire trust. They fuel doubt. 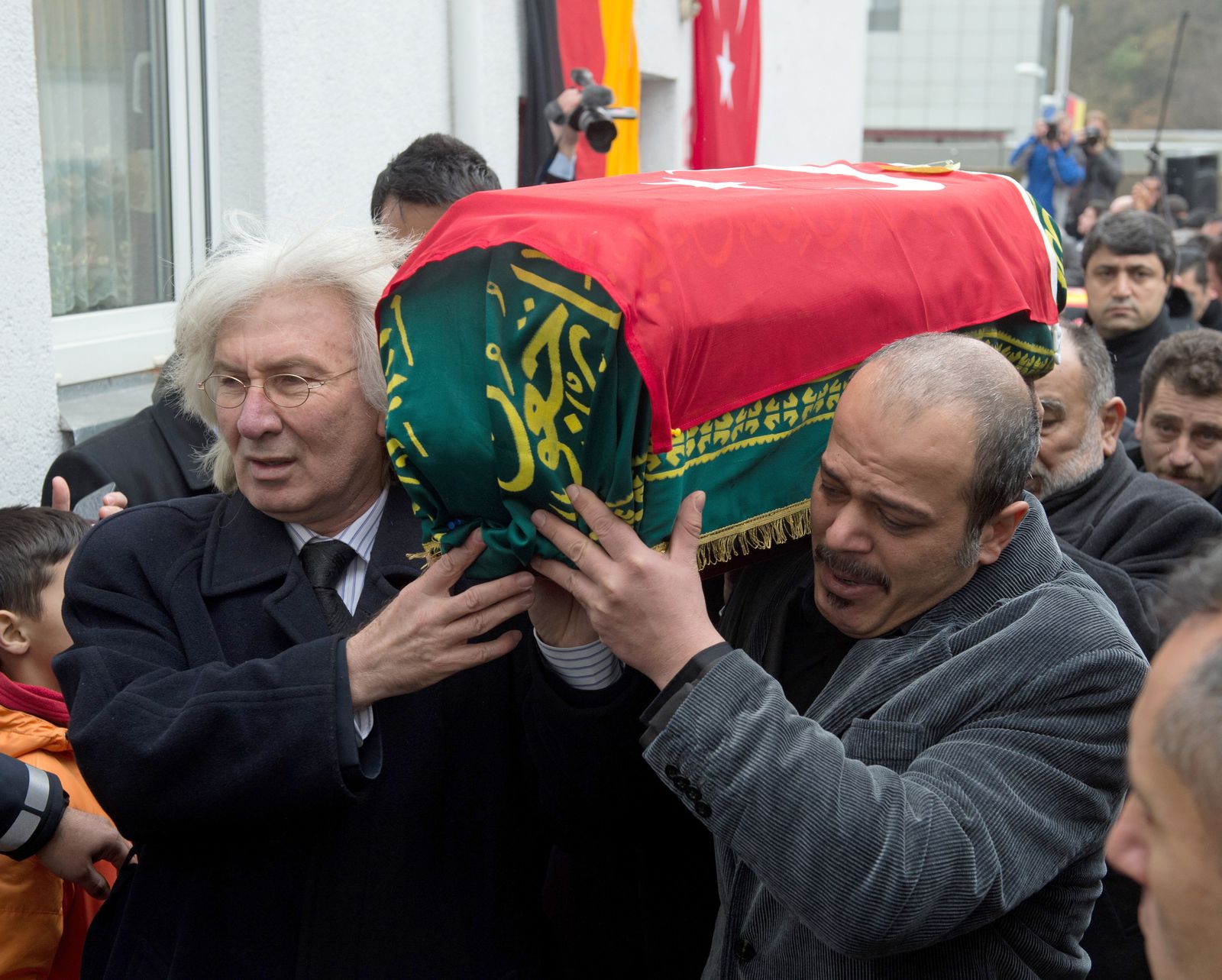 Turkish ambassador Hüseyin Avni Karslioglu (left) carries the coffin of one of the children killed in the fire.