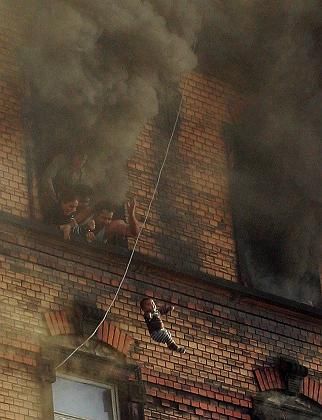 The heart-stopping moment when a mother threw her baby out of the window to save it from the flames. The child was caught by firemen and survived.

German police are investigating whether an apartment block fire in which nine people died on Sunday night was caused by arson, following media reports that a small girl saw a man set fire to a pram in the ground floor of the building.

Germany agreed Tuesday to a request by Turkish Prime Minister Recep Tayyip Erdogan to send a group of Turkish experts to aid the investigation. "We hope this incident has nothing to do with xenophobia," commented Erdogan, who is due to travel to Germany this week for a visit that had been scheduled before the fire.

He said he hoped the incident would not turn out to be a repeat of the 1993 killing of five Turkish girls and women in the western German city of Solingen in a blaze set by German youths. That incident drew worldwide condemnation and triggered an anguished debate about xenophobia in Germany.

German police said they were checking the girl's claim. "We're investigating all leads," a police spokesman said. But he added that any claims about the cause at this stage were just speculation. Police say it may take days to find out what caused the fire as the building is still too dangerous to enter because it may collapse.

Five children and a pregnant woman died and some 60 people were injured when the blaze tore through the building in the southwestern city of Ludwigshafen on Sunday. Eight of the victims who died succumbed to the effects of smoke inhalation. One woman died when she jumped from the building to escape the flames.

A photo of a desperate mother throwing her baby from a third-story window into the arms of firefighters on the ground went around the world. The baby survived.

Three Turkish families lived in the century-old brick building. However there were many more people there on Sunday afternoon because they had invited visitors to watch a carnival procession.

The chairman of the Turkish Community in Germany (TGD) organization, Kenan Kolat, said he had spoken to the girl who had claimed to have seen an arsonist, and that her account seemed credible. He said he was grateful for the messages of condolence that had been sent to the grieving families from Turks and Germans alike. "That's a comfort in this tragedy," he said.

Some 15 million people from immigrant backgrounds live in Germany, about 18 percent of the population. They include 3.2 million Muslims, the majority of whom are of Turkish origin.

Germany has seen a fierce debate about immigration this year in a regional election campaign in Hesse. State Governor Roland Koch drew fire for railing against "criminal young foreigners" and saying immigrants should embrace German values.