If only things had gone as well for others as they did for Ismail Tipi. He was 13 and didn't speak a word of German when, in 1972, he stood, nervous and miserable, in the main train station in Munich after arriving from Turkey. He missed his friends, the sea near his hometown of Izmir and his grandparents, who had raised him for the last four years.

Tipi is just one of millions of Turkish immigrants in Germany, and yet his story is unique nonetheless. After he had spent five years attending school in Turkey, his parents brought him to Germany to live with them in the southern city of Regensburg, where his father had been working for electronics giant Siemens since 1968.

Today Tipi is a member of the conservative Christian Democratic Union (CDU) and a representative in the Hesse state parliament. He is also an active member of the volunteer fire department and serves as the integration official for the local sports club. He is actively involved in his town's historical association and in a group that does fundraising for his daughter's high school.

If the lives of a significant portion of Turkish immigrants were even remotely similar to that of Ismail Tipi, no one in Germany today would be discussing the integration problems of Turks and Muslims or Thilo Sarrazin's bizarre theories on the genetic makeup of various ethnic groups. But it is precisely the roughly 3 million Turkish immigrants living in Germany who, according to studies by the Berlin Institute for Population and Development, are less effectively integrated on average than other immigrant groups. They are more likely than others to be poorly educated, underpaid and unemployed.

Anyone seeking to fathom the reasons for these discrepancies will uncover a decades-long history of failures, misunderstandings and missed opportunities, shortsighted political strategies and a recurring and stubborn tendency to ignore reality. "Germany has only had an intensive integration policy for about 10 years," says Rauf Ceylan, an expert on immigration and religion.

Ismail Tipi, the CDU politician, believes that both Turks and Germans have been fooling themselves for far too long. "It was an illusion to believe that we were all just guest workers and would eventually go back to Turkey."

'At the Prime of Their Labor Capacity'

The illusion began on Oct. 30, 1961, with the signing of a labor recruitment agreement between West Germany and Turkey. Similar agreements already existed with Italy, Greece and Spain, but the West German economy was booming and the demand for labor seemed endless. After receiving vaccinations and passing a medical fitness test, hundreds of thousands of Turks boarded special trains in Ankara and Istanbul and were taken to Germany. The workers arrived in Munich and were then distributed among the country's industrial zones.

The government and the economy were ecstatic over the Turkish guest workers, who were "between 18 and 45, at the prime of their labor capacity," boosted tax revenues and social security contributions and made a "substantial contribution to increasing production levels."

Thus, it came as no surprise that Josef Stingl, the then-president of the Federal Labor Agency, was practically euphoric when, in November 1969, he greeted the 1-millionth "guest worker from the southeastern European region" at Munich's main train station. The 24-year-old Turk from Konya in central Anatolia was given a television set before being shipped off to a factory in Mainz near Frankfurt, and Stingl used the opportunity to announce that Germany needed many more like him to maintain its course of strong economic growth.

German companies were mainly interested in semi-skilled or unskilled laborers for poorly paid, unpopular jobs on assembly lines and in shift work. Poor, remote regions of Turkey were the preferred recruitment areas. At the time, no one in Germany cared much about the fact that many of the new arrivals could hardly read or write, making it difficult for them to participate in German society. The guest workers were expected to live together in newly built dormitories near the factories where they worked, and return to their native countries after working for a few years.

But none of this was effectively regulated. A "rotation clause" intended to limit a foreign worker's initial stay in Germany to two years was removed from the German-Turkish treaty in 1964, partly as a result of pressure from German industry, which was loath to pay the costs of constantly training new workers. Besides, the Turkish immigrants had proven to be reliable workers who made fewer demands than their German counterparts but were no less productive, according to a 1966 report by the Confederation of German Employers' Associations (BDA).

Many Turks repeatedly delayed returning home. The economic and political situation was uncertain in Turkey, a country plagued by a series of military coups. Still, almost all of the workers assumed that they would eventually leave Germany and return to their families, says Tipi. "Some of our friends kept their packed suitcases under the bed or on top of a closet for 10 or 15 years, so that they could leave at a moment's notice." Many Turks worked in factories that employed interpreters, making learning German seem unnecessary.

Tipi's parents, on the other hand, moved out of the Siemens dormitory early on so that they could live among Germans in a Regensburg suburb. When they brought their son Ismail to Germany in 1972, his father immediately enrolled him in a local football club, hoping that he would learn the language as quickly as possible by playing football with the neighborhood children. "My father used to say: Wherever you make your living, that's your home," recalls Tipi. Because of his parents' efforts, Tipi enjoyed an enormous advantage over other Turkish children his age, who attended school in classes made up primarily of children of other Turkish immigrants.

The Rise of Immigrant Neighborhoods

Politicians tolerated but did not endorse or support such integration efforts. On the contrary, when the oil crisis threatened to stall the economy in 1973, the guest workers were suddenly seen as an economic burden. Then-Chancellor Willy Brandt's coalition government of center-left Social Democrats and liberal Free Democrats enacted a moratorium on the recruitment of guest workers, which, paradoxically, led to an increase in the numbers of foreign immigrants.

Fearing that life in Turkey would be not what they expected if they went home, and that they would never be able to return to Germany, many Turks decided to stay and, to be on the safe side, brought their families to their adopted country. But because they needed more space, the Turks began moving out of the dormitories and into cheap apartments in neighborhoods near the factories, which the Germans gradually vacated. This led to the rise of immigrant neighborhoods like Marxloh in the western city of Duisburg and Neukölln in Berlin, which are now seen as the strongholds of so-called parallel societies.

By the mid-1970s, says Freiburg-based contemporary historian Ulrich Herbert, there was a conspicuous "trend toward permanent residence" and, along with it, toward "the transformation of guest workers into immigrants." But according to Herbert, German politicians reacted either wth helplessness or by proposing contradictory plans. For example, while foreigners already in the country were to be "integrated," the official policy until the late 1990s was to "promote the desire to return home," at times by offering the guest workers monetary rewards of up to 10,500 deutschmarks (€5,400).

A Generation of Bilingual Illiterates

Many schools introduced supplementary lessons in Turkish, not to promote bilingualism but to prepare the children for a future life in Turkey. An "unconditional integration into the German school system" was not desired. The result, says Herbert, was a generation of "bilingual illiterates" who were fluent in neither the language of their parents nor that of their German fellow students. Their employment prospects were slim.

As German industry modernized and companies began demanding better qualified workers, the drawbacks of the practice of recruiting Turks largely from the uneducated classes became increasingly apparent. These "black Turks," as they are called by the elites in Istanbul and Ankara, are also popularly viewed in Turkey's major cities as unsophisticated, conservative and deeply religious.

While pious immigrants from Anatolia and their offspring shaped the image of Turks in Germany, countries with a more far-sighted immigration policy, like the United States, brought in well-trained specialists. In Britain, for example, Turks are considered well integrated. "They adapt to the British lifestyle, are generally very fluent in English, are involved in local politics and practice a moderate form of Islam," says Sara Silvestri, a social scientist at the University of Cambridge.

The Germans, on the other hand, were increasingly at odds with their Turkish immigrants. Their presence, and that of a large number of asylum seekers, triggered an ongoing political debate that fluctuated between the Green Party's demands for a multicultural society and a "right of residence for all" and the crudely xenophobic rhetoric of large segments of the CDU. "The foreigners' return to their native countries must be the rule and not the exception," Alfred Degger, the then-head of the CDU in the state of Hesse, said in 1982. In Degger's view, it was "not immoral to demand that what is left of Germany be reserved mainly for the Germans." Manfred Kanther, interior minister in the cabinet of then-Chancellor Helmut Kohl, expressed similar views in the 1990s.

The dispute came to a head in early 1999 when Roland Koch, the head of the CDU in Hesse at the time, campaigned against dual citizenship during the run-up to a state election, while voters lined up at CDU campaign booths to "sign petitions against the foreigners."

Today, more than a decade later, integration policy has more supporters across party lines. Armin Laschet, a CDU politician in the western city of Aachen, was one of the first conservatives to advocate a non-ideological commitment to immigration, and in 2005 he became the state of North Rhine-Westphalia's integration minister, the first such post throughout Germany. "The discovery of integration policy marks the end of a decades-long collective denial of reality," says Laschet today.

In 2006, then-Interior Minister Wolfgang Schäuble sounded out the prospects of Islamic religious instruction during a conference he held on Islam, and even Roland Koch, the governor of Hesse until recently, introduced German classes in his state for preschool children from immigrant families.

Some experts derive a sense of optimism from a completely different segment of society. Religious studies professor Rauf Ceylan, for example, is pinning his hopes on Mesut Özil, a young footballer of Turkish descent who played on the German national team at this year's soccer World Cup and became a favorite of the fans. Such images, says Ceylan, "are at least as important in promoting integration as all of our academic and political ideas put together." 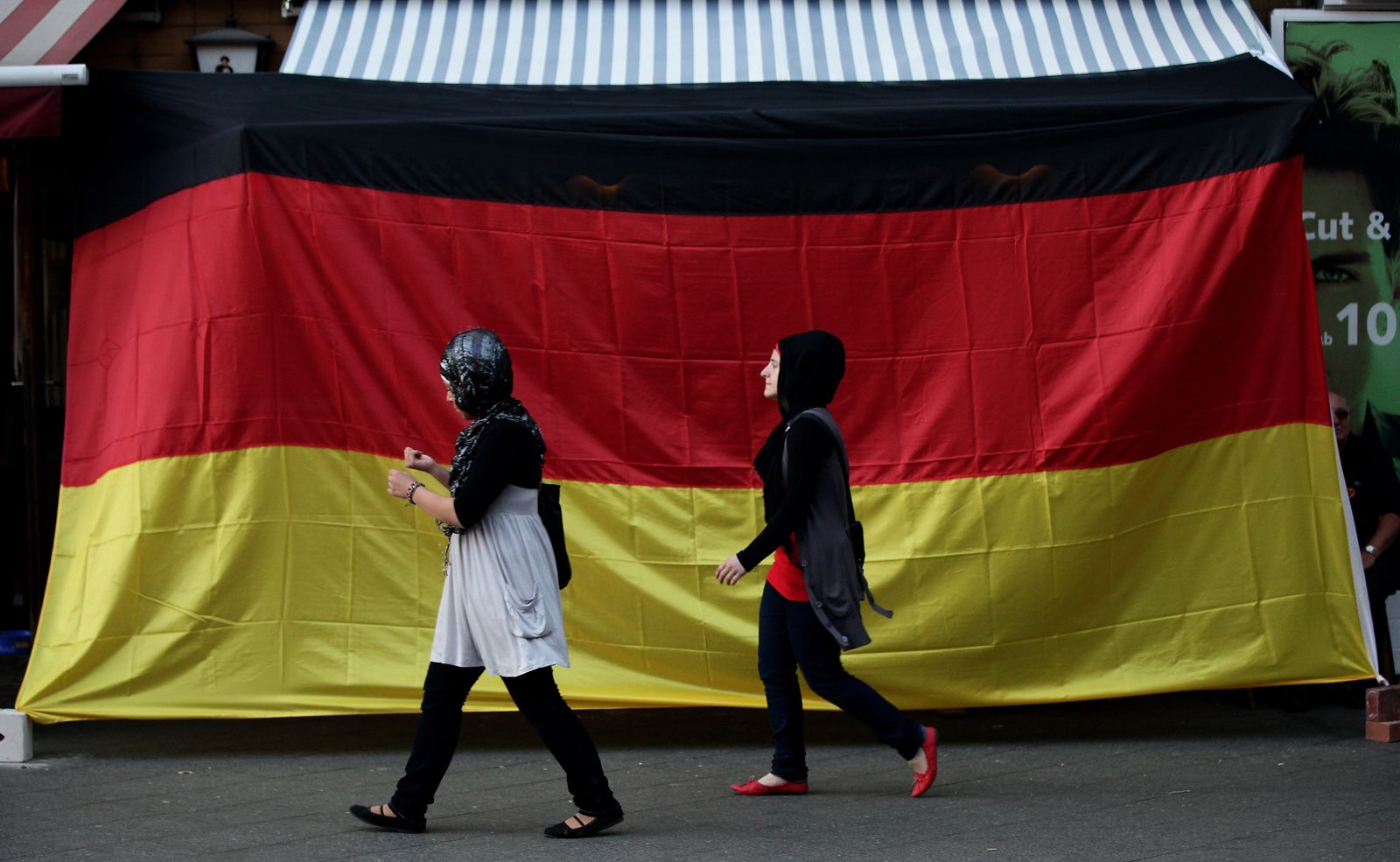 Two young Muslim women walk by a pub in the Berlin neighborhood of Neukoelln draped in a German flag during the 2010 soccer World Cup: A lack of a proper immigration policy in Germany in the past led to today's problems with integration.