The Turkish daily newspaper Sabah says it is planning to file an expedited suit at Germany's highest court in the hopes of securing a reserved seat at the massive upcoming trial of the sole surviving member of a German neo-Nazi terror cell that killed 10 people, most of then of Turkish origin.

"We will sue," Ismail Erel, the paper's deputy editor-in-chief, told the German news agency DPA on Wednesday, adding that the newspaper had yet to submit its complaint.

A dispute has been brewing for weeks in Germany over the distribution of regular press seats in the murder trial of Beate Zschäpe, one of three suspected members of the National Socialist Underground (NSU). The group is believed to be responsible for the killing of 10 people, including eight people of Turkish descent, a Greek man and a policewoman, between 2000 and 2007.

The trial against Zschäpe and four men suspecting of aiding the NSU, one of the biggest cases to unfold in Germany in years, will begin on April 17 at the Munch Higher Regional Court. The court claims that reserved seats for the media were allotted on a first come, first serve basis during the accreditation process. Although most of the victims were of Turkish origin, not a single journalist from a Turkish media outlet has been provided with a reserved seat.

Speaking to German public broadcaster ZDF, Erel demanded equal treatment under the German constitution. "Court cases must be public for fellow Turkish countrymen in Germany as well," he said, referring to the estimated 3 million people of Turkish origin living in Germany today. Erel added that freedom of the press and freedom of information laws must also be applied to Turkish-speaking journalists working in Germany. Officials at Turkish daily Hürriyet, which publishes editions in Germany and elsewhere in Europe, said they were also considering filing a lawsuit.

Turkey's ambassador to Germany, Avni Karsioglu, acknowledged that the court's actions in the media-accreditation process were at least technically correct. But he told journalists that the procedures had not been entirely transparent. Others accuse the court of political insensitivity, specifically given the high number of Turkish victims in the slayings.

'A Strong Lack of Instinct'

"The court has shown a strong lack of instinct," Pascal Thibaut, the deputy chairman of the Foreign Press Association in Germany, told public broadcaster NDR. "Lawyers have apparently handled the material without appreciation for the political and media dimensions the case has domestically and internationally."

Meanwhile, the Judicial Press Conference of Karlsruhe, an association of journalists reporting at Germany's high courts, which are all located in the southwestern city, is calling for a video transmission of the court proceedings into a spillover room (as was done with the Anders Behring Breivik trial in Oslo) -- a move the court has so far rejected. "It is our opinion that this is probably the only feasible way left to be able to make the inclusion of the so-far excluded Turkish media in this historic case at least partially possible," the group wrote in a letter.

Several German media establishments have offered to give their reserved seats to Turkish media, but these requests have been rejected by the court, which has refused to allow changes.

Stephan Mayer, a member of parliament for the conservative Bavarian Christian Social Union, has even called on the court to reserve 10 out of the 50 media seats for foreign journalists.

Meanwhile, Turkish Ambassador Karsioglu has confirmed that he also plans to attend the trial. "It is a given that I will be there with the victims' families and accompany them during their difficult journey," he said in an interview with ZDF. "It is my job and my duty to be there."

In recent weeks, suspicions between Ankara and Berlin have increased following two fires in Germany in buildings housing large numbers of people of Turkish origin. The approaching trial in Munich and the debate over seating for journalists has only heightened those tensions. This distrust has grown over the years following several deadly attacks against Turks in Germany, including the 1993 arson attack on a home in Solingen that killed five people. 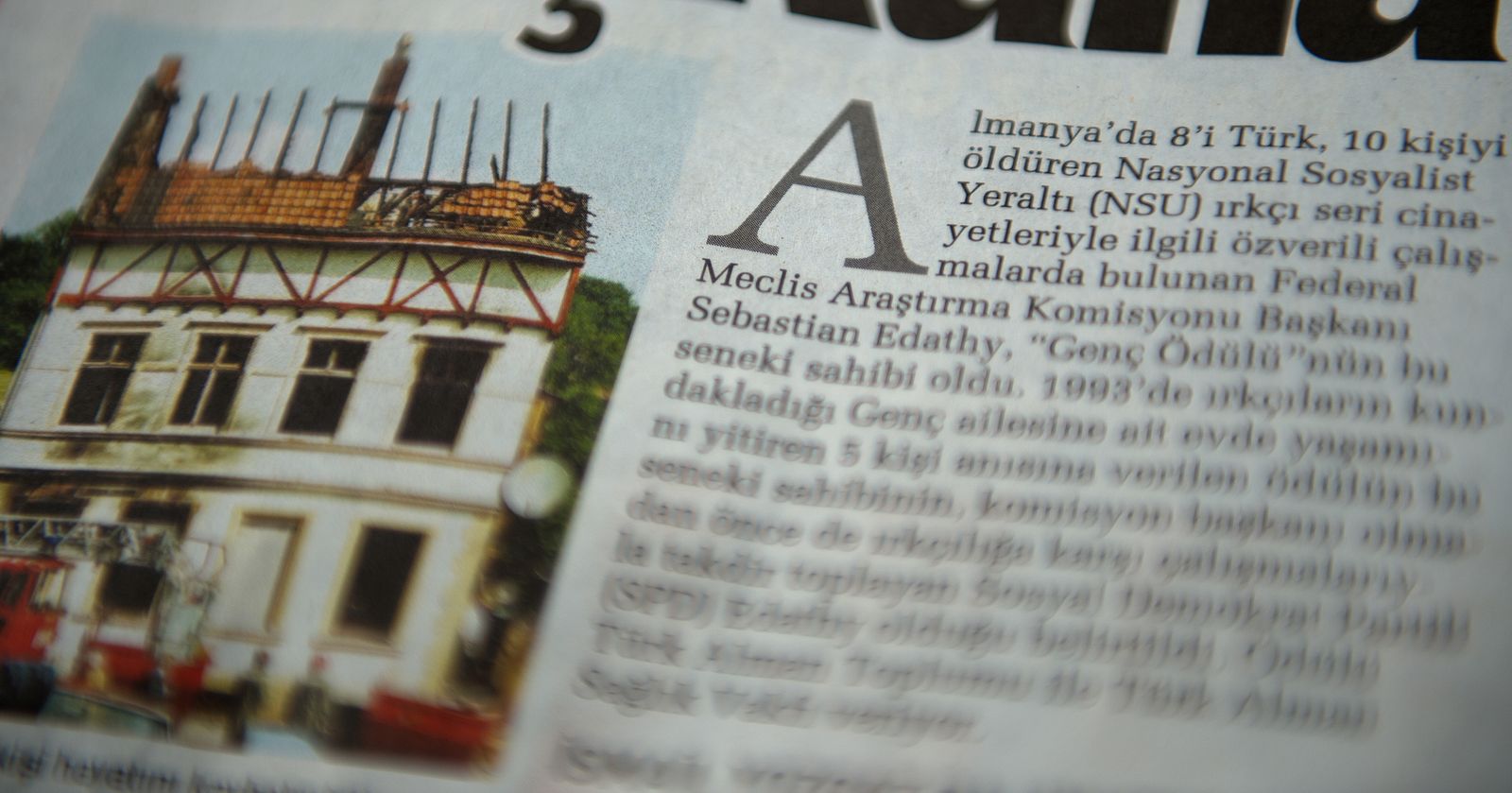 An article in the Turkish daily Sabah on the NSU neo-Nazi terror cell includes a picture of a 1993 arson attack in Solingen, Germany, that killed five people of Turkish descent.