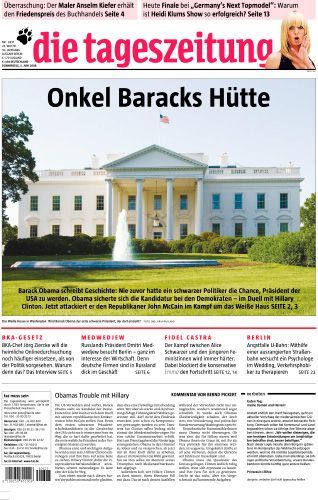 Offensive or satirical? The Taz's cover Thursday featured a picture of the White House with the headline "Uncle Barack's Cabin."

The Berlin-based daily Die Tageszeitung is normally considered a bastion of political correctness. The paper, which was founded in 1978, has always seen itself as a left-leaning alternative to the mainstream press and is known for its outspoken positions on issues such as globalization, the environment and xenophobia in Germany.

Hence readers were all the more surprised to see on the cover of the Thursday edition of the "Taz" -- as the newspaper is commonly known -- a photograph of the White House under the headline "Uncle Barack's Cabin." "The White House in Washington: Will Barack Obama be the first black president to move in there?" read the picture caption.

The headline refers to Harriet Beecher Stowe's 1852 anti-slavery novel "Uncle Tom's Cabin," which has become controversial due to its perceived stereotyping of African-Americans. The novel led to the expression "Uncle Tom" being used to pejoratively refer to an African-American who is subservient to whites.

Gary Smith, executive director of the American Academy in Berlin, a private center which promotes trans-Atlantic relations, told SPIEGEL ONLINE Thursday that the cover left him "speechless." "'Uncle Tom' is a racial slur, and the Taz editors clearly sacrificed substance and principle for an unreflected laugh," he said. "A journalism that prides itself on treating stereotypes with irreverence needs to think harder about its own deployment of stereotypes and racial allusions. There are countless ways to address the issue of race in this year's election more intelligently."

'Intended To Be Satirical'

Editors at Taz defended their decision to run the headline on Thursday. "The headline is intended to be satirical," deputy editor-in-chief Reiner Metzger told SPIEGEL ONLINE. "'Uncle Tom's Cabin' is a book that all Germans know and which they associate with issues of racism. The headline is supposed to make people think about these stereotypes. It works on many levels."

He said that the issue of race surrounds Obama in the presidential election campaign. "The fact that he is African-American plays a constant role in the campaign, but no one talks about it explicitly. One can play with that fact."

Metzger said that the Taz is famous for not being politically correct and is well-known for its ironic and cheeky cover headlines. "I'm sure 99 percent of our readers would understand it correctly. As for the rest, well, tough luck. You can't please everybody."

But many were clearly displeased by the Taz's cover choice -- including representatives of Germany's black community, who reacted with indignation. "I find the Taz cover very problematic," said Yonis Ayeh, a board member at the Initiative of Black People in Germany (ISD). The ISD represents the interests of black Germans, who are estimated to number up to 500,000 within Germany's population of 82 million.

"The newspaper is comparing Obama with Uncle Tom, a subservient slave," Ayeh said. "I'm sure Obama doesn't see himself like that. It transmits an image of black people as submissive, uneducated people, which is simply not true."

Ayeh was not surprised that an insensitive headline could come from a left-leaning newspaper. "There is also acute racism within the left-wing scene in Germany," he said. "They are no angels, and the Taz contributes to that when it commits such gaffes."

This is not the first time that the Taz has made an "Uncle Tom" reference. Back in 2004, the paper ran a story about Condoleezza Rice's appointment as US secretary of state under the headline "Uncle Tom's Rice."

The Taz has even sparked diplomatic incidents with its irreverent approach. Its depiction in 2006 of the Kaczynski twins, who were then prime minister and president of Poland, as potatoes caused a tiff between Poland and Germany.

Although "Uncle Tom's Cabin" is well-known in Germany, ordinary Germans are not always aware of the controversy surrounding the book. Visitors to Berlin are often surprised to find there is even a subway station in the city called Onkel Toms Hütte, after a residential district which was named in tribute to the novel.