The fear is palpable in the headquarters of Europe's largest tabloid. Bild Editor-in-Chief Kai Diekmann and the paper's online marketing experts are concerned about their newest product: "Shake the Bild Girl." The iPhone app allows users to "undress" the tabloid's girl of the day merely by shaking their phones. The feature was to be the main attraction in Bild's iPhone package, which went on the market in December of last year and has since been downloaded some 100,000 times. 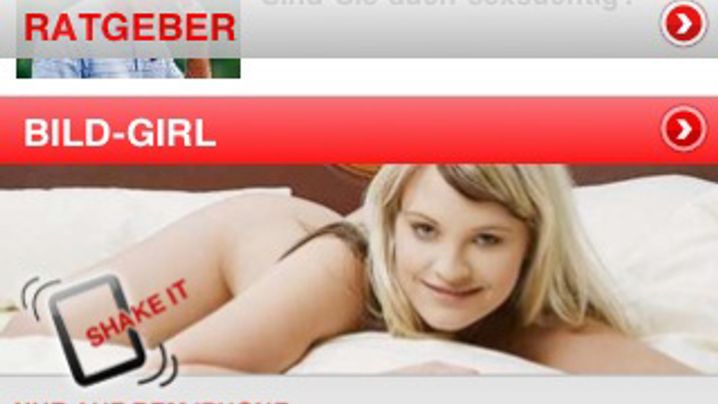 But the sexy images could soon be a thing of the past, Bild editors fear. Sources at the paper say that the new software version of the app -- seen as a potential revenue stream -- may not be approved by the US firm Apple, which manufactures the iPhone. Sex, so goes the argument from the otherwise laissez faire firm, has no place on an iPhone. The naked Bild girl is a step too far.

The tabloid has already toned down its "Shake the Bild Girl" app -- she now is left wearing a bikini after she disrobes. But Hopfen says Apple is "arbitrarily" strengthening its guidelines from day to day. She argues that such policies represent a "curtailing of press freedoms" for German and European media outlets. The Federation of German Newspaper Publishers, she writes in an e-mail, must take action "in the interest of freedom of the press." "Today it is naked breasts," she writes, "tomorrow it could be editorial content."

Springer's arguments may seem exceedingly far-fetched -- particularly given their clear business interests in continuing to offer up the Bild girl to iPhone users. But it is difficult to ignore an awkward phenomenon which has accompanied the iPhone boom. The device, along with its thousands of applications, is loved and praised worldwide. But Apple has shown itself to be expert at balancing hardware and software in its drive to generate the maximum profit. In doing so, it has at times been permissive, at others restrictive, when it comes to the apps it allows.

"It came to the point where we were getting customer complaints from women who found the content getting too degrading and objectionable, as well as parents who were upset with what their kids were able to see," Phil Schiller, Apple's senior vice president of product marketing, told the New York Times.

The market for iPhone applications has grown enormously in recent months. In September 2009, the company announced that some 100,000 apps were on offer, accounting for more than two billion downloads. Four months later, in January of this year, there are now 140,000, which have been downloaded more than three billion times. Sales of the mini-programs generate millions of dollars, with 30 percent of each purchase going to Apple.

Now, however, Apple wants the images altered so that the breasts are covered entirely. That has proven too much for Springer.

The Apple purity law presents publishers with a fundamental dilemma: How many limitations must it accept from Apple and how much censorship is to be expected in the future? The discussion has become particularly relevant with the introduction of the iPad, a product which many feel will result in the next big leap in digital media innovation. Publishers are asking how dependent they should allow themselves to be on a company which does not shy away from intervening in content.

Apple's restrictive policies have succeeded in angering app developers. Many complain that the company's policies are not transparent enough. When it opened its app store, the company published a Software Developer Kit, so that anyone could develop iPhone software. But once the programs are developed, Apple alone decides if they can be sold in the app store -- a fact which developers often discover well after they have created their program.

Criticism of Apple has been widespread ever since the app store opened. The company, many said, was almost dictatorial in its unpredictability. Apps from foreign providers were rejected or were removed from the app store, often for undisclosed reasons. Other apps are rejected to protect Apple's business interests, understandable to be sure, but considered unfair by many.

Most often, though, Apple's autocratic decisions are inscrutable -- particularly when it comes to so-called "objectionable content." What one finds offensive, after all, strongly depends on one's cultural background. A German-developed app, which allowed users to send their image as a religious icon in an E-postcard -- called "Me-So-Holy" -- was deemed to blasphemous by Apple.

The banning of Springer's "Shake the Bild Girl" app seems just as enigmatic -- particularly given the ongoing availability of the app "Passion." The mini-program activates the iPhone's motion sensor to measure sexual performance, using both physical motion and the volume of the ensuing orgasm as criteria. Apple has so far not found anything offensive about the sex-o-meter.