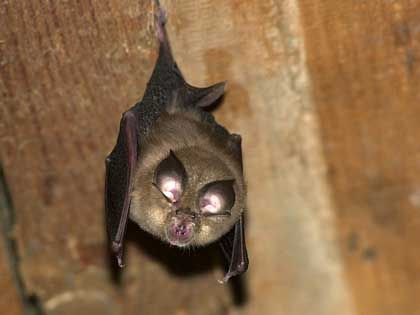 The lesser horseshoe bat (Rhinolophus hipposideros), which is 10 cm long and has a 25 cm wingspan, is in danger of extinction in Germany. Experts put its number at 650.

An administrative court in Dresden passed down a ruling Thursday halting the construction of a controversial bridge in the city until measures to protect an endangered bat species are put into place.

Construction on the 635-meter (2,100-foot) Waldschlösschen Bridge, which was to begin next Monday, must be halted until the city and the bridge's designers present further proposals to protect the lesser horseshoe bat and provide more "insect-friendly" lighting.

Proponents of the bridge, originally scheduled for completion in 2010, say it is necessary in order to remedy inner-city traffic congestion.

The controversy over the proposed €125 million ($172 million) bridge erupted when the United Nations Educational, Scientific and Cultural Organization's (UNESCO) World Heritage Site committee put the river valley on its "red list" of sites that risk losing their World Heritage Site status. If the bridge goes ahead in its current form, Dresden may lose the coveted accolade.

According to UNESCO, the proposed four-lane bridge would interfere with the aesthetics of Dresden's Elbe River Valley, which was awarded the World Heritage Site designation in 2004. At its latest committee meeting in June, the UNESCO committee overseeing World Heritage Sites voted to give Dresden until Oct. 1 to propose an alternative, which might include a different bridge design or a tunnel.

UNESCO's World Heritage Site committee identifies sites around the world with exceptional cultural or natural value and recognizes them as being of international importance. The appellation is thought to greatly increase a city's international standing and draw as a tourist destination.

The latest court ruling is the latest of many ping-pong-like legal decisions relating to the bridge's construction. In Aug. 2006, a lower court forbade the project. This decision was overturned by a higher court in March 2007, which ordered planning to proceed.

A public referendum held in 2005 had 68 percent of active voters in favor of the project. However, at that time, voters were not aware of the possible loss of the World Heritage Site status or the alternative of building a tunnel. Current polls have 60 percent of the population now standing against the construction.

The court's ruling came in response to an expedited motion submitted by the nature-preservation organizations Green League, NABU and BUND Sachsen. Any appeals process could keep the project on ice for two to three years.

"The court's decision gives us another chance to find a compromise that would help Dresden retain its world culture status," Tiefensee told the Sächsische Zeitung. "By October 1, we need to get a reasonable and feasible alternative on the table and find a consensus."

There are a total of 851 UNESCO World Heritage Sites in 141 countries, of which Germany currently has 32. No site had ever been taken off the list until this year, when a nature protection area in Oman due to be converted to an oil field lost its prized status.