If analysts are correct, a little quirk in Germany's election system known as "overhang seats" might translate into a big boost for Chancellor Angela Merkel's conservatives in the Sept. 27 general election. 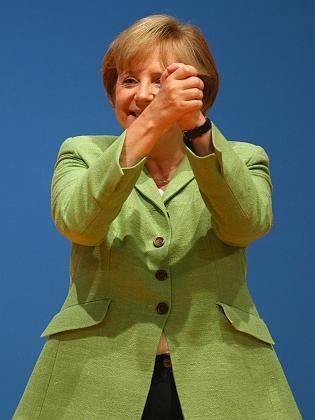 Heading for a second term? A confident Merkel at Monday's CDU/CSU party congress.

The unexpected advantage is a product of Germany's complex electoral system, which is based on proportional representation with elements of first-past-the-post, relative majority voting.

When a German goes to the polls in a general election, he or she gets two votes: one for his or her local constituency representative (the so-called "first vote") and one for the party he or she prefers (the "second vote"). A total of 299 members of parliament are chosen using each of the votes, which means that there are nominally 598 seats in the Bundestag, Germany's lower house of parliament.

The number of seats a particular party has in the Bundestag is made up of the constituency representatives (known as "direct mandates") it wins through the first vote, plus a certain number of extra seats based on its share of the total national second vote. These seats are filled from a state-level list of candidates that the party draws up and are allocated across Germany's 16 states based on how many votes the party got in each state.

For example, in the 2005 election, the Green Party won just over 8 percent of the national vote but only one constituency, in Berlin. It therefore had one "direct mandate" seat from the Berlin constituency, plus 50 seats allocated on the basis of its share of the second vote, making 51 Bundestag seats in total.

But there's a quirk in the system. All the candidates elected directly through the first vote automatically get Bundestag seats. This can lead to the situation where a party has more seats in a particular state than it would theoretically be entitled to, based on its share of the second vote. For example, in the 2005 election, the conservative Christian Democrats (CDU) won 31 out of 35 constituencies in the state of Baden-Württemberg, giving it 31 "direct mandate" seats. However according to its share of the second vote, it would actually have been entitled to only 28 out of the state's 74 seats, meaning it effectively had three "extra" seats.

Parties are allowed to keep the so-called "overhang" seats won in this way and extra seats are created in the Bundestag to account for them.

Normally these overhang seats don't make a huge difference to the result. In the 2005 election, for example, the center-left Social Democrats won nine overhang seats and the CDU seven. The number of seats in the Bundestag was therefore 614, when the 16 extra overhang seats were added to the normal 598 seats.

But this year overhang seats could play a significant role in the overall result, due to a unique set of circumstances. According to Joachim Behnke, a professor of political science at the University of Friedrichshafen, the upcoming election will generate more overhang seats than ever before, with the likely winners being Angela Merkel's CDU.

The current constellation in opinion polls has the conservatives holding around 36 percent of the vote -- historically almost the lowest level a frontrunner party has had going into a general election -- while at the same time lying more than 10 points ahead of the second biggest party, the center-left Social Democrats, with whom the CDU has ruled in an awkward grand coalition government since 2005. This combination of a relatively low share of the party vote with a huge lead over their nearest rival creates the ideal situation for overhang seats to be generated: The CDU is likely to win many constituencies, which are decided on the first-past-the-post principle, while simultaneously having a relatively low share of the total vote.

Based on a simulation he ran, Behnke believes that this "historically unique situation" could mean that up to 20 overhang seats go to the CDU. Should the Christian Democrats win the projected number of overhang seats, it would boost Merkel's chances of winning a second term and being able to form a new coalition government with her preferred partner, the liberal Free Democrats.

Behnke's prediction that the CDU will benefit from having a number of overhang seats has been seconded by Manfred Güllner, the director of the prestigious Forsa polling institute, and Dieter Nohlen, a professor of political science at Heidelberg University.

As a result of this quirk, many people are calling for change to the current system. Germany's highest court, the Federal Constitutional Court, ruled last year that the electoral system needs to be changed because it could in certain circumstances distort the will of the electorate. But it gave parliament until 2011 to reform the system and will allow the 2009 election to go ahead under the current system.

The SPD is itching to change the system and has toyed with the idea of backing a motion brought by the opposition Greens. The motion calls for a change in the system that would largely eradicate overhang seats by removing the state-by-state calculation. Instead, all the direct mandates a party wins in all 16 states would be counted together when calculating how many extra seats should be awarded according to the "second vote" results. That way, a large number of direct mandate seats won in one state would be cancelled out by poorer performances elsewhere.

Together with the opposition Left Party, the SPD and Greens could have mustered enough votes to enforce electoral reform in a vote to be held this Friday. But the SPD has abandoned its plan to back the motion because it might bring down the government and breach an agreement among the two ruling parties to refrain from opposing each other in parliament.

Merkel, whose conservatives are -- unsurprisingly -- against reforming the electoral system before the election, has told the SPD to honor its coalition agreement.

"We're loyal to the agreement," said Hubertus Heil, the SPD's general secretary, on Monday. But it's unclear whether all SPD deputies will stick to the party leadership's line.