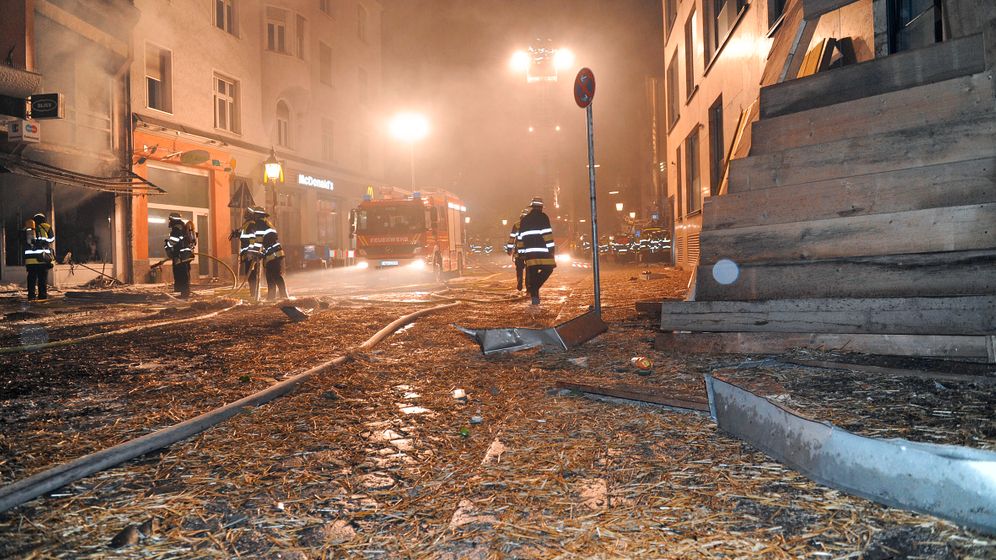 A good three hours after he took off from England, Henry Chandler had a beautiful view of the Brandenburg region of Germany. From the cockpit of his Boeing B-17, he could see the Havel River in front of him and, to his right behind the aircraft, a light haze over Berlin. Within a few minutes, the 25-year-old pilot was gazing down at the town of Oranienburg from an altitude of some 6,000 meters (20,000 feet).

Chandler gave the order to open the bomb bays.

The air raid wasn't targeting the town's roughly 26,000 inhabitants. With its military infrastructure, Oranienburg ranked among the top targets of the American bomber fleet. The railway station was a point of departure for soldiers headed for the Eastern Front. At the nearby Auer Werke, uranium was processed for the Nazi's top-secret nuclear research program. A few hundred meters from there stood the Heinkel Aircraft Works and the main vehicle depot of the SS.

Seven years ago, Chandler returned to the city where he had inflicted a great deal of pain and suffering. He was surprised to hear that the bombings still affect daily life in Oranienburg. Every day, members of the bomb disposal squad are in action and, time and again, entire city blocks have to be evacuated.

During World War II, over 10,000 bombs fell on Oranienburg in 13 attacks - subjecting the town to more explosive firepower per square kilometer than any other German city. As many as 1,500 bombs failed to detonate. Some 200 were defused or detonated when the town was part of communist East Germany, and 168 have been eliminated since German unification in 1990. The most recent one was rendered harmless by the bomb specialists last Friday at the railway station.

Hundreds of bombs still lie undiscovered under the city. In Oranienburg the search is more systematic than anywhere else in Germany. Still, experts estimate that here alone it will cost some €400 million ($518 million) to find and remove them -- and it will take decades before the job is finished.

More than half of the big bombs discovered in Oranienburg since 1990 were equipped with a chemical delayed-action detonator. Depending on how they were set, these bombs were designed to detonate up to 48 hours after they hit the ground -- impeding rescue work and adding an element of insidious terror to the bombings.

And they are still doing so today.

Too Dangerous to Defuse

Indeed, 67 years after they were dropped, these munitions remain highly dangerous, as documented in an expert report compiled for the police in 2008 by Wolfgang Spyra, a professor of chemical engineering and hazardous waste at Germany's Cottbus-based Brandenburg University of Technology. He analyzed disabled bombs and found that their detonators were "extremely sensitive to impacts and vibrations," and in an "extremely critical" state. It is "probable," he writes, that some of them will soon detonate on their own. He adds that the older the bombs become, the more difficult it will be to defuse their delayed-action detonators. Soon, he concludes, it will "no longer be possible" to neutralize the bombs without resorting to controlled explosions.

In the future, it will likely be necessary to detonate more bombs of this type -- as was recently the case in Munich and in the western German town of Viersen.

When American and British bombers reduced German cities to smoldering rubble during World War II, roughly one-tenth of the millions of bombs did not explode. Some lie only 30 centimeters (12 inches) below the surface, others as much as 6 meters deep -- and nearly all of them represent an enormous hazard.

Porous bombs are rusting in the ground wherever the Allies flew missions against the Third Reich during the last two years of the war: on the Lower Rhine, in the industrial Ruhr region, in large southern German cities like Augsburg and Pforzheim and, of course, in Hamburg and Dresden.

Every year, disposal squads working for Germany's states defuse or detonate some 5,000 World War II bombs -- and tens of thousands still lurk in the soil. In Hamburg over 11,000 duds have been defused since 1945, and it's thought that 2,900 remain undiscovered. In Berlin there are still presumed to be around 3,000.

It's usually construction workers using excavators and shovels who come across old corroding metal, and promptly call the bomb disposal squads. Last December, extremely low water levels on the Rhine, near the German town of Koblenz, exposed a British aerial bomb weighing 1.8 metric tons. Some 45,000 residents had to be evacuated. This included seven retirement homes, two hospitals and a prison. Specialists defused the bomb. But that wasn't possible on Aug. 28 in the Munich district of Schwabing, where a 250-kilogram (550-pound) bomb with a delayed-action detonator was detonated in a controlled explosion, sparking fires that caused millions in damages. Razor-sharp shrapnel was hurled up to 300 meters into the air.

One week later, workers on the Heiligengeistfeld fairground in Hamburg found two bombs -- on the very spot where children ride the carousel at the Hamburger Dom, northern Germany's biggest fun fair. Bomb experts from the fire department were able to defuse the detonators. Only two weeks ago, a 250-kilogram bomb discovered near a pedestrian zone in the town of Viersen blasted a one-meter-deep crater during a controlled explosion.

This explosive wartime legacy poses the biggest threat to bomb disposal specialists, 11 of whom have been killed during clearance missions since 2000. In June 2010, three men died in one explosion in the central German city of Göttingen. The plan was to defuse a 500-kilogram bomb with a delayed-action detonator that was discovered on the Schützenplatz, a popular central location for antique and flea markets. One hour before the planned use of the robot, the bomb exploded even though none of the technicians were touching it.

"When working with bombs with delayed-action detonators, you're not even allowed to cough heavily, that's how sensitive they are," says Horst Reinhardt, technical director of the bomb disposal squad in the town of Wünsdorf in the eastern German state of Brandenburg. Reinhardt has personally defused some 150 bombs. Is he afraid of these operations? "No," he says, "my wife fears for my safety. But for me, it's just routine."

Bomb disposal experts and their assistants receive modest salaries. Depending on their age, and the German state where they work, technicians receive between €2,400 and €3,500 a month, and in many cases a hazard bonus of up to €1,000.

Old munitions also kill unsuspecting citizens. In Oct. 2006, the driver of a bulldozer was killed at a highway construction site near Aschaffenburg. A dud exploded when his machine hit the bomb. In 2008, a farmer died near the western town of Geilenkirchen. He had accidentally touched off a phosphorous grenade while harvesting.

In Oranienburg, in the eastern state of Brandenburg, bomb technicians try to minimize such dangers. They benefit from the fact that the US air force photographed its targets after every bombing raid to document the success of their missions. Bomb craters are recognizable on the photos along with so-called suspected sites, which indicate that a bomb may have hit without detonating. This is where the disposal squads search for duds. But roughly one-third of the unexploded bombs cannot be identified using photos.

The bomb searchers have created a map of the city with 1,990 suspected sites where duds are presumed to be located. They have checked more than one-third of the sites.

Technicians armed with long metal poles scan the area. At the end of each pole hangs a magnetic coil that indicates magnetic impulses in the ground below. Bombs have been discovered in planned residential areas and in front of a high school in the town. In one town nearby, a house had to be torn down because a bomb was suspected of being underneath it.

'We're Sitting on a Powder Keg'

Such operations are costly for Brandenburg state coffers. Since German unification, the government in the capital Potsdam has spent some €315 million ($406 million) on tracking down and disposing of bombs and other munitions across the state. The German federal government has contributed €108 million in compensation. But it only pays for the disposal of munitions that once belonged to the Third Reich, not for Allied bombs -- although shells, antitank rocket launchers, grenades and bombs from the Wehrmacht constitute a relatively small proportion of the buried explosives inherited from Germany's military past.

The Bundesrat, the upper legislative chamber that represents Germany's 16 states, has moved to correct what it sees as an unfair distribution of burdens. In Oct. 2011, it proposed a financing bill for removing hazardous wartime munitions. The draft legislation calls for the federal government to completely cover the costs of disposal. Chancellor Angela Merkel rejects this notion, and it's unclear when the lower house of parliament, the Bundestag, will vote on the bill.

Brandenburg Interior Minister Dietmar Woidke refuses to accept the current situation: "The ongoing endangerment from Allied munitions is the legacy of a war that Germany waged, not the state of Brandenburg," he argues. Woidke says that the state "cannot be held accountable for the historical misfortune of being one of the main combat zones of World War II."

The mayor of Oranienburg, Hans-Joachim Laesicke, also objects to the Chancellor's attitude: "What annoys me is the ignorance of the federal government. We're sitting on a powder keg here in Oranienburg."