It was meant to be a publicity stunt -- a political prank aimed at voicing displeasure over vast US Internet surveillance and spying activities. But Oliver Bienkowski, the light artist who projected the words "United Stasi of America" onto the US Embassy late Sunday night now finds himself in hot water with the Berlin police after authorities opened an investigation.

Officially, a Berlin spokesman confirmed on Friday, Bienkowski is suspected of having violated a law against "insulting organs and representatives of foreign countries." So far, however, the artist has not yet even been approached by the authorities, though the Berlin police said he would soon be invited in for questioning.

The projection, which included an image of Internet activist and hacker icon Kim Schmitz, aka "Kim Dotcom," took place at around 1 a.m. local time on Sunday night and lasted for a mere 30 seconds before police guarding the embassy asked him to move on. "Stasi" is a reference to the infamous East German Ministry for State Security, which managed a vast network of spies and informants in communist times -- but which also persecuted the state's political opponents.

Bienkowski told SPIEGEL ONLINE that his goal was to "do things that people will see and try to get them to think." Specifically, he wanted to voice criticism of US web surveillance, the vast scope of which was revealed recently by whistleblower Edward Snowden. Bienkowski says he even spent €5,000 ($6,500) out of his own pocket to finance the costs of the guerilla light projection.

Despite the slow pace of the investigation thus far, the artist has already hired a lawyer. And in a press release issued this week, the law firm made clear that it sees the case as having little merit. For one, the law firm D. Breymann Rechsanwälte says that a complaint has to have been made by the US Embassy for the case to be pursued. But the embassy has told Berlin daily Tagesspiegel that it does not intend to file such a complaint. For another, the supposed insult was not directed at a specific individual.

Mostly, though, Bienkowski's lawyer makes clear that the projection on Sunday night should be protected by the right to free speech. "By making use of the artistic form of satire, which has always been characterized by exaggeration and hyperbole, Bienkowski was protesting in a legitimate manner the massive degradation of civil rights, particularly via the recently revealed attacks on the private spheres of (not just) German civilians through intercontinental surveillance measures," the lawyer's statement reads.

Bienkowski, for his part, seems unconcerned as well, telling SPIEGEL ONLINE on Friday that it is a cut-and-dry case of freedom of expression. He also seems to harbor little animosity toward the Berlin police themselves -- even if they forced him to turn off his projector just seconds into his protest. "They were very friendly," he says. 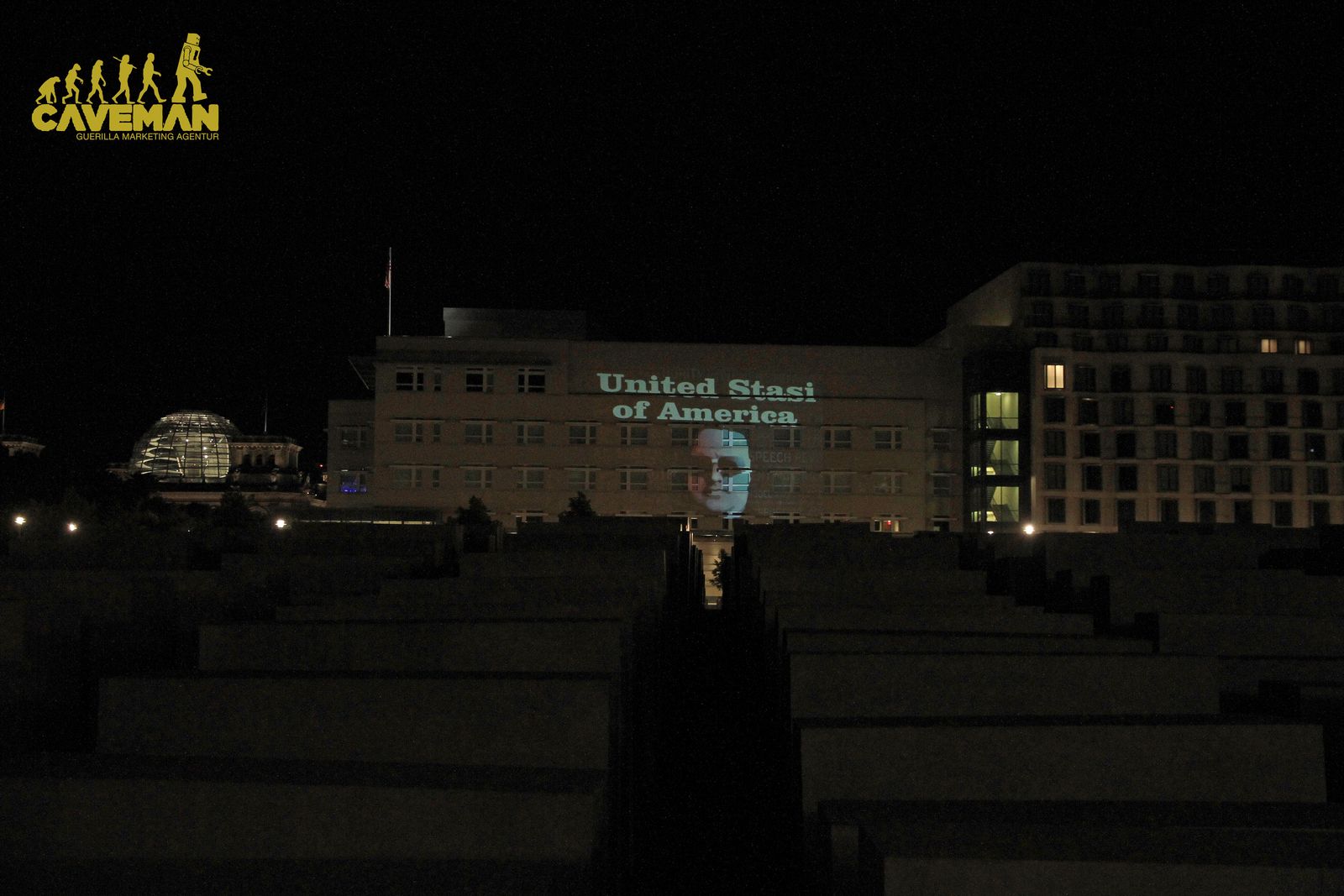 Berlin police believe that this message, projected onto the wall of the US Embassy in Berlin on Sunday night, could be a violation of laws against insulting representatives of foreign states.