Martina Sommer definitely doesn't want to be buried in a cemetery. She doesn't want an expensive funeral, an engraved headstone or a grave her family will have to take care of. The 49-year-old from Oberkrämer, a small town near Berlin, would rather donate her body to science.

After all, Sommer reasons, medical schools rely on donated bodies to give their students a chance to learn how to cut skin with a scalpel, what organs feel like and how to sew it all back together.

In the past, any university in Germany would have been glad for people like Martina Sommer, people who make the decision early on that they wanted to render this particular service for the good of higher education. But things have changed, and it's doubtful whether a medical school will even accept Sommer's application.

Indeed, cold storage space at the country's university clinics is full. "We receive many more inquiries than we can handle," says Hans-Peter Hohn, a professor at Essen University Hospital's Institute of Anatomy. Hohn explains that 20 people call each month to express an interest in donating their bodies even though the institute only needs 35 to 40 of them a year. Hohn now has to turn applicants away.

"We had to put a complete halt to this last September," is also the word from Christof Schomerus, director of the Department of Pathology at the University of Frankfurt's hospital. At that point, Schomerus had received 200 applications, when 50 would have sufficed for providing students with the necessary learning material. At some clinics, bodies spend two years in cold storage before they're finally put to use in a seminar.

Just how this surplus in bodies can completely overwhelm a clinic's staff became eminently clear at the University of Cologne. Over the course of months, the university accumulated 80 bodies, and the employees in charge of them started losing track of things. In fact, they apparently aren't even sure about the identities of three of their bodies. Seeing how they can be unbearable for one's relatives, such circumstances simply can't be allowed to occur. Likewise, the cold-storage chaos had a tragic ending for the clinic staff, as well, when the former director took his own life after the problems were made public.

The fact that increasing numbers of Germans are signing up for the dissecting table isn't necessarily an indication of any great dedication to science. Average costs for burials are rising and now stand at €6,000 ($8,000). That's an amount many people don't want to -- or aren't able to -- afford. Even the burial allowance previously provided by Germany's compulsory health insurance funds, an amount last set at €525, was abolished in 2004. "That contributed to the increase in inquiries everywhere," Schomerus says.

In the meantime, more and more university clinics have been trying to discourage people from donating their bodies. Since universities also have burial costs to cover after using a donated body, around half of anatomy departments have started charging fees ranging from €500 to €1,200. "On average, a burial, including grave maintenance, costs us between €1,800 and €2,000," Hohn explains, adding that the figure is likely to increase. At the root of the problem are cemetery fees, which rose by an average of 10 percent in the first half of 2010 alone. For cash-strapped communities, these fees provide a good, reliable source of revenue.

In addition to charging fees, anatomy departments at many universities have now come up with other strategies for stemming the tide of donors. The university clinic in Mainz, for example, only accepts the bodies of people who lived in the state of Rhineland-Palatinate. In Ulm, the border is drawn at a 10-kilometer (six-mile) radius around the city. In Bonn, applicants must have been born before 1941. And, in Giessen and Berlin, they must be at least 60 years old. In addition, the bodies must still be complete. While a body without an appendix will still be accepted, one lacking a kidney doesn't stand a chance.

The Department of Pathology at the University of Frankfurt's hospital has even come up with a particularly ingenious idea for how to master rising costs: increasing the number of bodies it uses. The university now offers advanced training seminars to doctors who, as Schomerus explains, can use bodies to "learn new operation techniques." The fees that doctors pay for the seminars help the university fund the dissection courses for its students. Still, this system only pays off because the city provides the university with special conditions -- or something like a bulk discount rate -- at Frankfurt's main cemetery.

Meanwhile, given the increasingly strict regulations and the possible costs associated with donating her body to science, Martina Sommer has come up with another alternative. If no university wants her body, then there's always Gunther von Hagen's controversial "Body Worlds" exhibition, which shows human bodies preserved through a technique known as plastination. "They'll pick up anywhere, even in the smallest village, and all free of charge," Sommer enthuses. 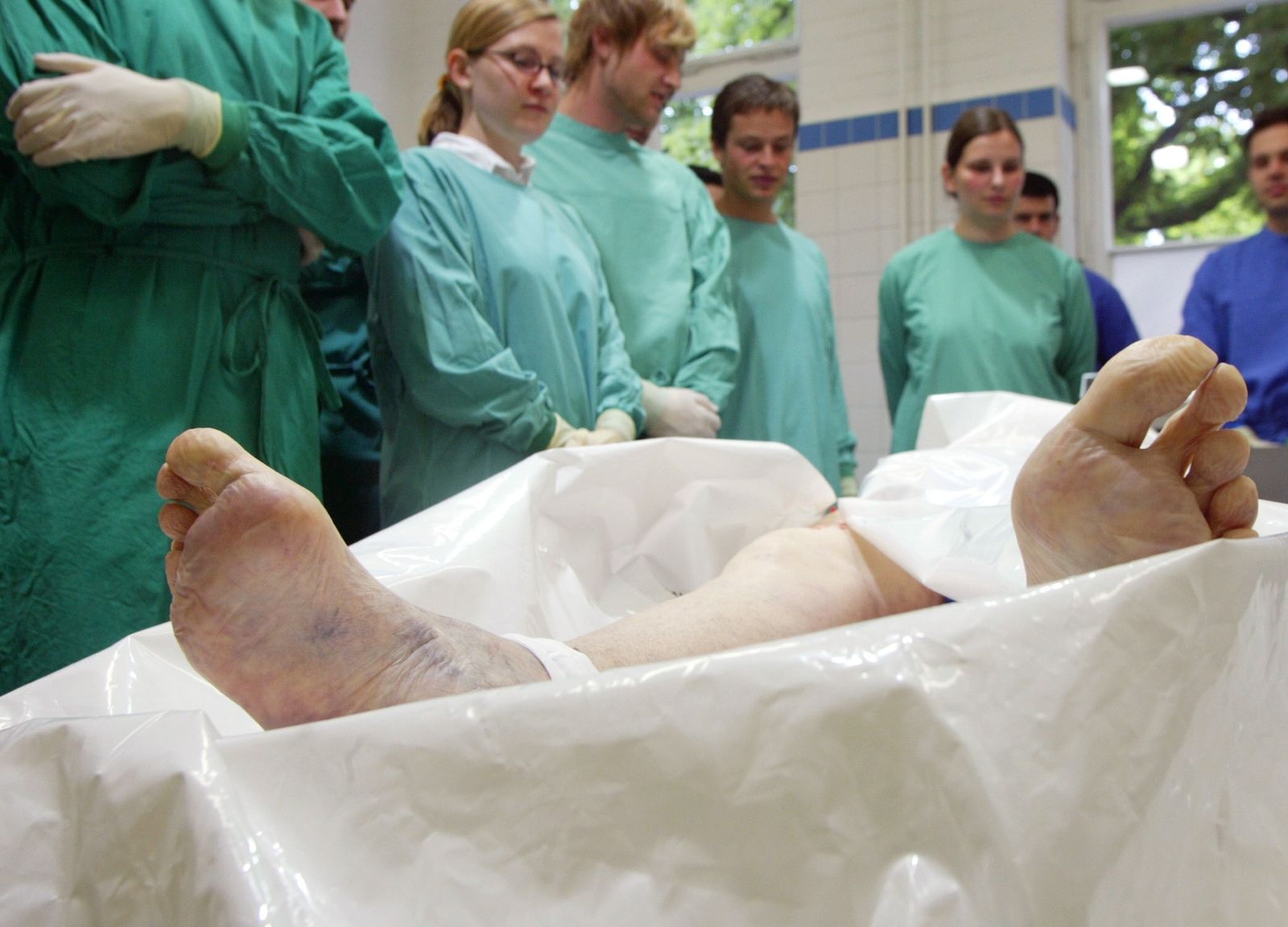 Germany's university hospital get more donated bodies than they can use.