Prior to World War II, the Ardeatine Caves were mined for the volcanic material known as tuff for use in cement production. But by March 24, 1944, production had long since ceased. On that day, torches inside the cave's corridors and hollows provided makeshift lighting. Outside, in the afternoon sun, trucks were hauling prisoners to the site -- a total of 335 men, the youngest of whom was only 15. They were all Italian.

The German occupiers wanted to avenge an attack that communist partisans had carried out a day earlier on a German police unit in Rome's Via Rasella. The victims of this retaliatory act were chosen at random. Most of them had been imprisoned in a Gestapo jail in the Italian capital or were being detained by the Wehrmacht, Germany's Nazi-era military. None of them had been involved in the attack.

At 3:30 p.m., an initial group of five men was herded into the caves. An SS officer was there to ask their names and cross them off a list. The men were forced to kneel in the dim cavern, where SS members shot them dead. Then the next group of five was brought in. As more and more corpses littered the paths, the Germans stacked the bodies up in piles that the next group had to climb before being executed themselves. The process lasted until early evening.

Even more horrific, many of the executioners drank heavily during the operation, which made their shooting increasingly erratic. Several victims survived the initial shots. Some suffocated under the weight of the dead lying on top of them. Then, the SS detonated explosives in the caves.

This act of violence went down in the history of war crimes as the Fosse Ardeatine massacre. After the war, it became a symbol of German atrocities in Italy during the Third Reich. Today, a large memorial commemorates the event, and leading Italian politicians lay wreaths there each year.

But even if it continues to be publicly commemorated to this day, neither German nor Italian officials had any interest in bringing its perpetrators to justice. Indeed, the only person to be punished for it was Herbert Kappler, the SS officer in charge of German police and security services in Rome during the war. He was sentenced to life in prison in 1948.

While researching why officials have been so reluctant to punish these crimes in the political archives of Germany's Foreign Ministry, Berlin-based historian Felix Bohr stumbled upon a spectacular set of documents, which he published earlier this week on an Internet portal for historians.

The documents entail an exchange of letters begun in 1959 between officials at the German Embassy in Rome and their counterparts at the Foreign Ministry in Bonn, Germany's capital at the time. With unprecedented clarity, the documents testify to how German diplomats and Italian officials cooperated in shielding the soldiers in Kappler's charge from criminal prosecution. As embassy adviser Kurt von Tannstein put it, the goal was a "putting (the affair) to rest, as desired by both the German and Italian side."

Tannstein joined the Nazi Party in 1933, the year Hitler became Germany's chancellor, and he entered the diplomatic service under Joachim von Ribbentrop, Hitler's foreign minister from 1938 to almost the end of the war. Since only Tannstein and Foreign Ministry employees with Nazi pasts dealt with events surrounding Kappler, Bohr's discovery could very well rekindle the debate surrounding the ministry's history.

In 2010, a historical commission published the best-selling book "Das Amt und die Vergangenheit" ("The Office and the Past"), which documented the Foreign Ministry's involvement in the Holocaust. Since then, historians and journalists have been looking into whether diplomats who had loyally served Hitler switched to championing the values of the postwar Federal Republic of Germany (BRD) -- or whether they used the Foreign Ministry as a vehicle for obstructing justice.

Agreeing to Sweep the Matter under the Rug

In the case of the Ardeatine Caves, the initiative came from the Italian government. Their initial attempts to see that the German crimes wouldn't go unpunished were abandoned early. Many of the perpetrators were living in postwar Germany, and the Christian Democrats ruling in Rome were hoping to avoid having to make any extradition requests. As one leading diplomat in Rome warned: "On the day that the first German criminal is extradited, there will be a wave of protests in countries that are demanding the extradition of Italian criminals." After all, Italy had sided with Nazi Germany until 1943 and occupied parts of the Balkans, where hundreds of thousands of people fell victim to the Italians' reign of violence.

As a result, a major cleanup operation was launched in the military prosecutor's office in 1958. Thousands of files were locked away in the archives. The following year, civilian prosecutors began focusing their attention on the Fosse Ardeatine massacre. Proceedings against Kappler were never formally closed because 12 suspected SS leaders and Wehrmacht judges could not be conclusively identified.

"During the conversation, Col. Tringali clearly expressed that there was no interest on the Italian side in once again bringing the whole problem of the execution of hostages in Italy, and especially the ones in the Fosse Ardeatine, to the public's attention. This was not desired, he said, for reasons having to do with domestic politics. He would thus welcome it if official German bodies were able, following the obligatory careful examination, to confirm to the military prosecutor's office in Rome that either none of the accused were still alive or that their whereabouts could not be pinpointed or that individuals could not be identified owing to imprecise information regarding their names.

"On the other hand, should the German bodies' investigations succeed in determining that all or some of the accused were still alive and residing in the Federal Republic of Germany, the German government would be free to invoke the German-Italian extradition agreement and to declare that desired information could not be supplied because the Federal Republic of Germany does not extradite its own citizens as a general matter of principle."

Ambassador Klaiber -- who had also been a member of the Nazi Party since 1934 and worked under Hitler in the Foreign Ministry -- added his own thoughts, saying that he supported this "understanding request."

Klaiber's sympathy for the perpetrators was typical of the early days of new, postwar Germany. Equally unsurprising, responsibility for answering Rome's request went to Hans Gawlik in the Foreign Ministry's main offices in Bonn. The inconspicuous diplomat had joined the Nazi Party in 1933, served as a prosecutor in Breslau (now Wroclaw in present-day Poland) during the war and later gone on to defend a number of senior SS figures at the Nuremberg Trials. Only later, as SPIEGEL reported in 1968, did it emerge that Gawlik took advantage of his position in the Foreign Ministry to warn former Nazis against traveling abroad should they have been convicted in absentia in their destination countries and were thus at risk of arrest.

As such, it's hardly surprising that Gawlik wrote the embassy in January 1960 that "the current whereabouts (of those being sought could) not be determined." What's more, he added, there was some doubt as to whether the men were even still alive. An embassy worker noted: "This corresponds with the anticipated result."

Among those being sought was Carl-Theodor Schütz, who commanded the firing squads in the Ardeatine Caves. The former SS captain was now serving postwar Germany in the Bundesnachrichtendienst (BND), the country's foreign intelligence agency.

Another person on the list was Kurt Winden. According to Kappler, the head of the SS security contingent in Rome, Winden had a hand in selecting the victims of the massacre. Winden would later deny the accusation. Still, he would have been easy enough to locate in 1959: He was working as the head of the in-house legal department at Deutsche Bank's headquarters in Frankfurt.

The documents even reveal that, by 1961 at the latest, Gawlik was aware of where SS first lieutenant Heinz Thunat lived. Ex-Nazi Gawlik wrote to his fellow ex-Nazis Klaiber and Tannstein that Thunat's mailing address was "known here." Klaiber was instructed to notify the Italians "that no statements on Thunat would be delivered."

Justice Delayed and for Only a Few

The legal proceedings in Rome came to a close in February 1962.

Years later, after ex-Nazis had already retired from their postwar positions, only two of the men on the wanted list would have to answer for their actions in the Ardeatine Caves. Both of them admitted to taking part in the shooting during the massacre, and both of them had been living in the open for decades using their real names: Erich Priebke had been in Argentina while Karl Hass had even spent time in Italy from time to time.

In 1998, the two were sentenced to life imprisonment. Hass has by now passed away, while the 98-year-old Priebke is living in Rome under house arrest. He was the man crossing off names as the victims were ushered into the caves to meet their doom. 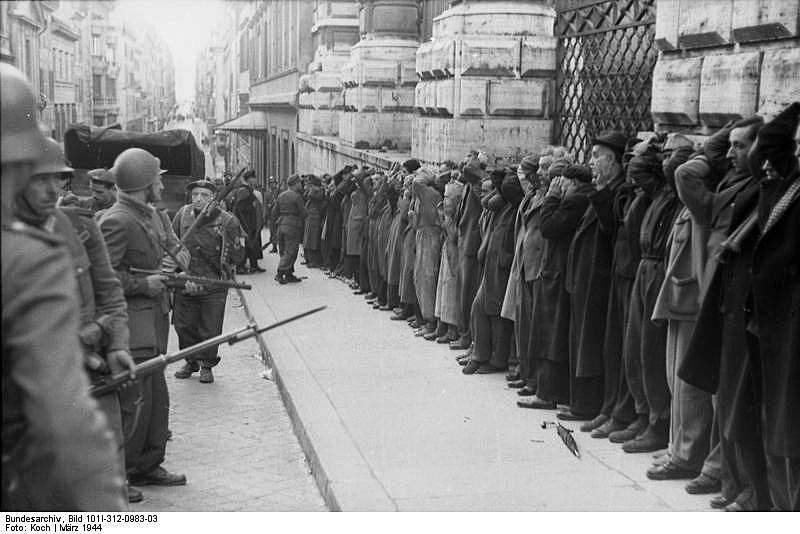 Italian civilians are arrested in Rome by German troops following the partisan attack on occupying soldiers in Via Rasella a day earlier.