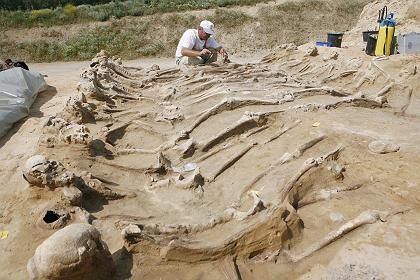 An archaeologist gently uncovering a row of skeletons in the mass grave found in Wittstock near Berlin.

Archaeologists in Germany are examining a mass grave containing the skeletons of more than 100 soldiers who fell in a major battle during the Thirty Years War.

Workers came across the graves by chance while digging in a sand pit near the town of Wittstock, northwest of Berlin, in June.

"The special thing about this find is that there are only very few mass graves in Europe between 1300 and 1850 that can be attributed to specific battles," Anja Grothe, the archaeologist leading the excavation, told SPIEGEL ONLINE.

Historians and archaeologists called to examine the neat rows of skeletons quickly concluded that they were men who died in the Battle of Wittstock on October 4, 1636, when a Protestant army of 16,000 Swedes beat a force of 22,000 from the Catholic alliance of the Holy Roman empire and Saxony. Some 6,000 men died in the fighting.

Archaeologists are now excavating the site and have started to examine the skeletons, many of which show the dreadful battlefield wounds that killed them -- bones smashed by heavy blades, skulls torn open by musket balls.

The rarity of such graves may seem astonishing given the hundreds of battles that shaped Europe's blood-drenched history. But the battlefields often stretched over a number of square miles, and the dead tended to be buried individually where they fell.

"They were stripped of clothing and weapons and anything else usable and usually just buried on the spot," said Grothe. "People didn't want to cart the corpses from one place to another."

Only Four Other Mass Graves

She said that apart from the find in Wittstock, only four other mass graves in Europe that were associated with specific battles had been discovered:

* on the Baltic island of Gotland, dating from a 1361 battle between Sweden and Denmark

* in the northern English village of Towton. A grave containing 43 soldiers was discovered underneath Towton Hall in 1996. They are believed to have died in the Battle of Towton in 1461 during the English Wars of the Roses

* in Vilnius, the capital of Lithuania, where the remains of 2,000 soldiers from Napoleon's Grand Army were found in 2002. They died during Napoleon's disastrous retreat from Moscow. Many of the skeletons were found curled up and undamaged, suggesting they were killed by cold, not cannonballs or bullets.

Grothe, who works for the state of Brandenburg's Office for Monument Protection, said the Wittstock bodies would be taken away and forensically examined.

Examining the Strains of a Soldier's Life

Her team of five specialists are carefully sifting through the pit with plastic spades, spoons, brushes and vaccum cleaners. The investigation will shed light not only on the battle itself but on life at the time, said Grothe.

"We can get exciting insights into the lives of the soldiers," she said. "For example we can find out things about the men's general health from their tooth decay. At least three bodies show signs of syphilis. And we can check the bones for disease and examine the impact on the bodies of the strains of the soldiers' life  carrying heavy weapons, shoving cannon, hauling baggage trains."

Most of the corpses had been stripped before they were buried and only evidence of their undergarments remains in the form of metal hooks and loops, she said. "Everything that was usable in any way was taken off them -- shoes, weapons, upper clothing."

The archaeologists will try to establish the men's origins. Soldiers from from several nations fought at Wittstock, including German states, Scots and Swedes.

Grothe said the grave contains around 130. Most of the men were aged 20 to 35 when they died. The bodies are piled above each other in neat rows.

She said it was unclear what will happen to the corpses once the examinations have been completed. "It will take a while and we'll need extra funding," she said.