When Andreas Jacobs tried to enter his office at the Konrad Adenauer Foundation in Cairo on Dec. 29, 2011, he encountered heavily armed members of the security services at the door. Inside, the Egyptian police were searching the offices of the organization, which is affiliated with Germany's center-right Christian Democratic Union (CDU) party. The authorities seized computers and documents, and the office manager later spent hours being questioned by an investigative judge. The government officials justified their actions by claiming that the foundation had "opened offices in Egypt in an illegal manner and therefore violated the law."

The German foundation in Cairo is one of 17 Egyptian and foreign non-governmental organizations (NGOs) that have come under close scrutiny by the country's ruling military council. This is partly the result of their critical view of the regime. In a November report, Jacobs complained that the human rights situation in Egypt was, once again, just as catastrophic as it had been under former dictator Hosni Mubarak, and that "the ruling military leaders are trying to delay or even obstruct the political transition." This isn't the sort of thing Egypt's military rulers like to read.

The Adenauer Foundation's office is now open again, after Foreign Minister Guido Westerwelle applied pressure to the government during his visit to Cairo last week. But this is no guarantee against acts of repression. The Egyptian military government is nervous.

In Germany, six non-profit foundations are affiliated with an equal number of political parties represented in the federal parliament, the Bundestag. The incident in Cairo illustrates how difficult overseas work can be for these foundations. The Friedrich Ebert Foundation, aligned with the center-left Social Democratic Party, or SPD, is the largest, with 90 offices abroad, while the Heinrich Böll Foundation, affiliated with the Green Party, is the youngest. Although their individual agendas may differ, all of these foundations are advocates of democracy, human rights and social justice.

From the perspective of the host countries, however, the foundations are by no means charitable organizations that merely provide unbiased political development assistance. Regimes in authoritarian countries, in particular, quickly come to suspect the foundations of working against them. The more unstable the regimes in the Middle East become, the greater the risk that these foundations will become embroiled in local power struggles. Cases like the one in Egypt will probably become more common.

The autocrats' suspicions are not unfounded, either. In the past, the foundations have often played an important role in countries transitioning to democracy. In Chile, for example, the first democratically elected president following the Pinochet dictatorship, Christian Democrat Patricio Aylwin, had close ties to the Adenauer Foundation.

From the standpoint of those in power, an organization that organizes seminars on freedom of the press or cultivates relationships with opposition politicians in a dictatorship is operating against the system. In July 2011, the Egyptian military council used one of the websites it controls to announce that the country was being threatened by dubious organizations that were pursuing a "foreign agenda" and contributing to the destabilization of Egypt. After that, the account activities of hundreds of employees of NGOs were scrutinized.

What the foundations consider to be the promotion of democracy and human rights is seen by authoritarian regimes as an assault on their power. In Belarus, for example, a German foundation is even operating underground without official approval, say diplomats. It is clear that this sort of activity is also directed against the dictatorship of President Alexander Lukashenko.

'Some Governments Don't Know How to Treat Us'

The sometimes difficult relationship between the foundations and their host countries is partly a result of their unusual structure. The foundations are non-governmental organizations, and yet governments pay for their work abroad. In 2011, the German foundations received about €250 million ($325 million) from the budgets of the German Foreign Ministry and Development Ministry. "Some governments don't know how to treat us," says Gerhard Wahlers, deputy general secretary of the Adenauer Foundation.

Even in countries with close ties to Germany, it is difficult for the foundations not to become caught up in the maelstrom of domestic political debate. There are no acts of repression against the German foundations in Israel, but their work is not exactly appreciated. On the contrary, says Angelika Timm of the Rosa Luxemburg Foundation, which is affiliated with the Left Party, she is often asked why her organization receives public funding.

The German foundations are also sometimes accused of intervening in Israeli affairs. "This is partly because we work with partner organizations that, from the Israeli perspective, are seen as being very far to the left," says a representative of a foundation with ties to the conservative camp.

A few weeks ago, the government introduced a bill into the Israeli parliament, the Knesset, that would require "political NGOs" to pay the maximum tax rate of 45 percent on all funds from foreign, government donors in the future. If the law is passed, it could have "a serious impact" on foundations with ties to political parties, says Ralf Hexel, director of the Ebert Foundation in the city of Herzliya in central Israel.

German diplomats often point to the special role that the foundations played with respect to German policy in the Arab spring. Unlike embassies, they reached the entire spectrum of society. The Adenauer Foundation, for example, tends to seek out conservative groups as its partners, while the Ebert Foundation works primarily with trade unions or social democratic organizations.

The foundations can maintain contact with opposition groups, whereas foreign policy dictates require diplomats to keep their distance from such groups. This dual function -- formal independence combined with proximity to the government -- generates mistrust. Because the foundations are viewed in Berlin as an instrument of foreign policy, they are sometimes also suspected of maintaining close ties to the intelligence agencies.

This also happens in countries like Turkey, an ally of Germany within NATO. Despite the fact that the Konrad Adenauer Foundation has had offices in Ankara for 28 years and the Friedrich Ebert Foundation has been active in Istanbul for 24 years, the authorities have held onto their deep-seated suspicions.

"Turkey doesn't even trust its own civil society," says Ulrike Dufner, who has managed the Istanbul office of the Böll Foundation for the last eight years. "So how can it be expected to trust foreign civil organizations?"

In 2002, the general public prosecutor at the State Security Court in Ankara introduced proceedings against four German foundations and the German Near and Middle East Association, because they allegedly constituted a threat to the security and unity of the Turkish nation.

The indictment cited a book by an ultra-nationalist history professor as evidence. In the book, the author claims that the foundations are stooges of the BND, Germany's foreign intelligence agency, and that their goal is to weaken Turkey and thus exert more control over it.

The trial ended in 2003 with an acquittal, but it did nothing to change the basic attitudes of government officials. The foundations remain a thorn in the government's side to this day, says Dufner. In 2011, Turkish Prime Minister Recep Tayyip Erdogan even accused them of supporting the banned Kurdistan Workers' Party (PKK).

The suspicions of many governments are by no means unjustified. In Spain, for example, political foundations funded parties after the fall of the Franco dictatorship. The BND allegedly set up a secret account for this purpose, with the funds being distributed by the Chancellery. All those involved insist that the account no longer exists today.

A Campaign Against Foreign Organizations

Nevertheless, the military council in Egypt is continuing its campaign against foreign foundations. The authorities now have their sights set primarily on organizations from the United States, including the National Democratic Institute, with ties to the Democrats, and the International Republican Institute (IRI). Six American NGO workers were even denied exit visas. The head of the IRI office in Cairo, for example, was not permitted to leave the country for Dubai, in an incident that could prompt Washington to suspend its military aid to Egypt.

For the German foundations, however, it comes as no comfort that the Americans are currently the focus of government harassment. They know that it could be their turn again soon. Adenauer Foundation head Jacobs wrote a new country report in January. Its assessment of the military council is not very flattering. 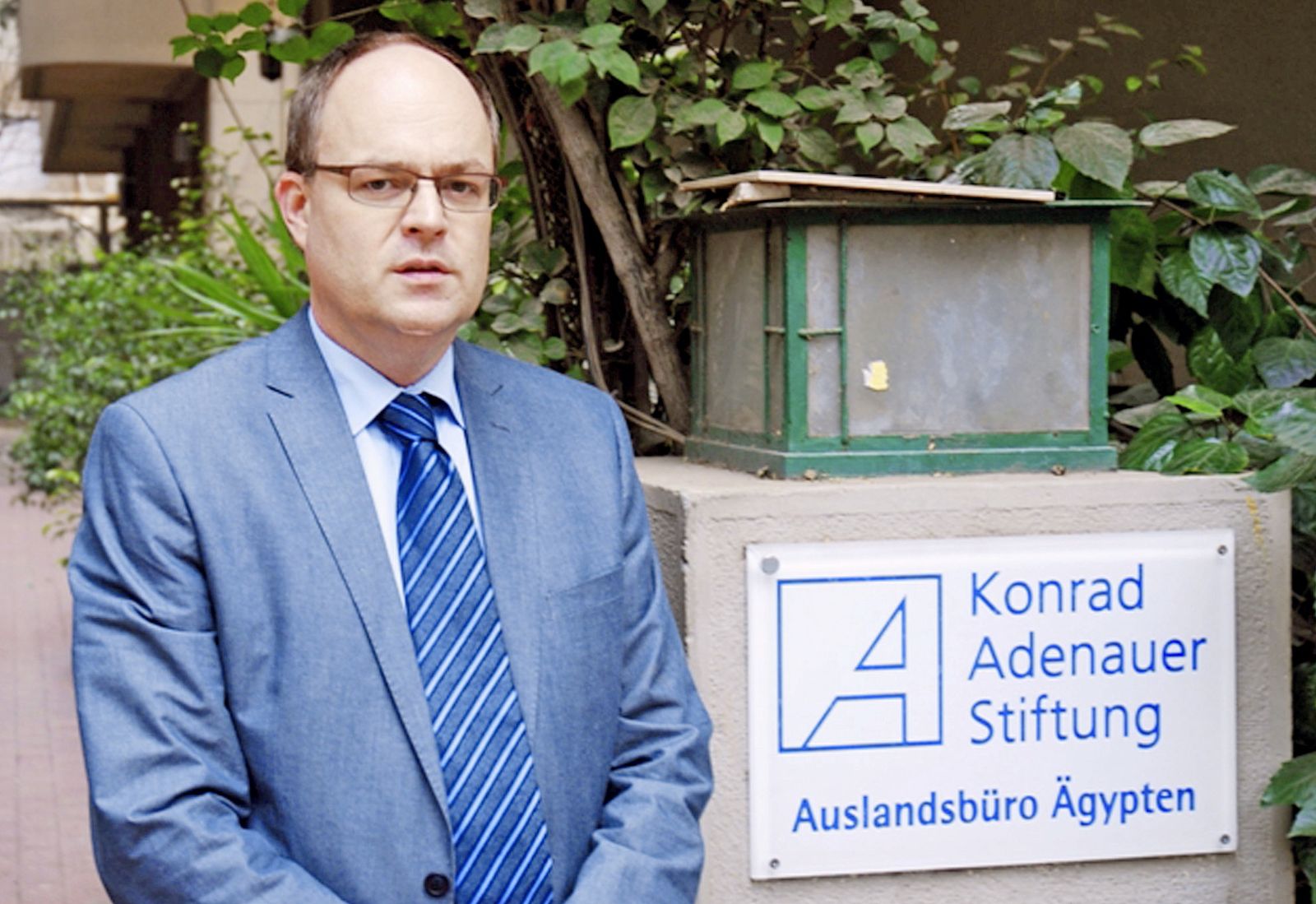