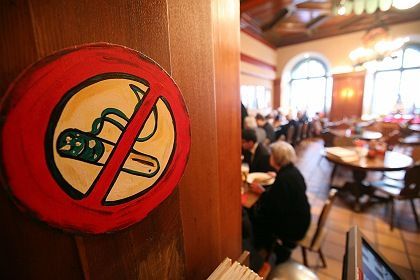 Smoking is banned inside this Munich beer hall -- but for how long?

The leaders of the Christian Social Union, the conservative Bavarian sister party to Angela Merkel's Christian Democratic Union, are planning to relax Bavaria's smoking ban -- just two months after it was introduced.

The state's ruling party wants to introduce the relaxation next week, granting special exemptions to beer tents and small pubs. The change in regulation is aimed in particular at large tents, as found in Munich's famous Oktoberfest.

Many of the party's top politicians blamed the state's strict smoking ban on their party's poor showing in recent local elections. The CSU suffered big defeats in Munich and Nuremberg in Sunday's polls, where center-left Social Democratic Party mayors were re-elected with bigger marigins. A leading CSU politician, who prefered to remain anonymous, told the Süddeutsche Zeitung on Monday that many of the party's supporters had abstained from voting because of the ban.

The smoking ban, which was introduced in Bavaria on Jan. 1, is the strictest in Germany, forbidding people from lighting up in restaurants, pubs and even beer tents -- meaning that the 2008 Oktoberfest will be smoke-free. Bavaria was one of eight German states to ban smoking in public places from the start of this year.

The calls for a relaxation of curbs in Bavaria were criticized by Maria Eichhorn, a CSU politician who speaks on drug isssues in the Bundestag, the German parliament. She told the German news agency DPA on Wednesday: "A relaxation of the smoking ban in Bavaria would be fatal for public health protection and for the public's trust in politicians."