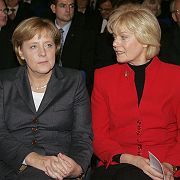 Erika Steinbach, right, has been pushing Angela Merkel for a museum in Berlin dedicated to the plight of Germans expelled from their homes at the end of WWII. On Wednesday, she got her wish.

The German government has approved controversial plans for a museum dedicated to the many Germans expelled from their homes in what is now Poland, the Czech Republic and Hungary at the end of World War II.

The museum will cost approximately €30 million ($47 million) and will document not just the plight of post-war German refugees but of refugee populations across Europe throughout the 20th century -- to soften the sense that some Germans view themselves as victims of Hitler's war. The project has been tied up for years because it upsets many Poles who say Germany wants to rewrite its wartime past.

The Federal Cabinet approved the museum after a February visit by Federal Culture Minister Bernd Neumann to Poland. Neumann won a reluctant agreement from Polish officials not to actively oppose the museum, and to allow Polish historians to participate.

Neumann's visit was intended to ease concerns that a memorial or museum to the German expellees would portray Poles as villains, or somehow minimize the crimes committed by Germans during the war. Tensions between Warsaw and Berlin have eased a little since Poland's former prime minister, the right-wing populist Jaroslaw Kaczynski, left office in November 2007. Kaczynski and his brother Lech -- who's still serving as president -- had turned the planned museum into a political issue.

But it wasn't just the Kaczynskis; the museum has long been a sore point in German-Polish relations. CDU parliamentarian Erika Steinbach, head of the Federation of Expellees, has pushed this project for almost a decade, to the dismay of a long list of Polish politicians.

In exchange for cooperation under the new prime minister, Donald Tusk, Germany will pursue other projects with Poland, including a possible World War II museum in Gdansk, once German Danzig, and a Europe-wide network of sites dedicated to Nazi atrocities.

At the end of the war, European borders were redrawn, with Poland moved west. A chunk of German territory was given to Poland, and the Soviet Union took a portion of Poland's eastern lands. Between 1945 and 1950, almost 90 percent of ethnic Germans were forced out of this region. Estimates place the number of refugees over 10 million; more than a million civilians are thought to have died as a result of the forced migration.