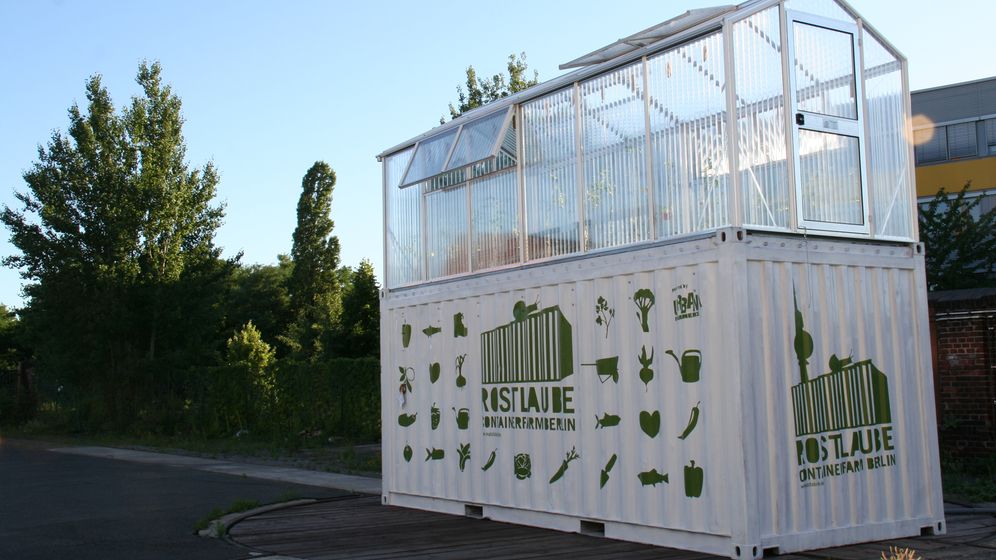 Most of our food makes an environmentally-costly journey by plane, train or truck before it lands on city supermarket shelves. But three Berlin-based entrepreneurs want to change this by cultivating food in the heart of the metropolis.

The Frisch vom Dach, or Fresh from the Roof project, plans to create a 7,000-square-meter roof garden, complete with a fish farm, to provide Berliners with sustainable, locally-grown food. They hope to sow the seeds of a new form of urban agriculture, arguing that traditional farming needs to evolve -- and soon.

"Humankind is driving fast into a wall," said Nicolas Leschke, a co-founder of Frisch vom Dach. "Global resources are running out. With so many people living in cities, we need to think locally."

Currently, the expansive roof of the former malt factory in Berlin's Schöneberg district is more grey than green. But in 2013 they plan to harvest lettuce, herbs and tomatoes, as well as raising different species of fish. Once their unorthodox farm is established, they expect to produce tons of vegetables and fish each month.

The products will be distributed from within the old malt factory, bringing food production closer to Berliners' plates, and erasing the CO2 emmissions generated by transporting food long distances.

Key to their plans are a row of massive vats near the top of the rambling factory. Formerly used to dry barley, they want to repurpose the containers as a fish farm.

The fish will be sold as food and, crucially, their excretions, especially the ammonia excreted through the gills, will be converted into nitrates. That will serve as fertilizer for the plants growing in green houses above the fish tanks. In turn, the plants will purify the water for the fish. The system for sustainable food production is known as "aquaponics."

"The beauty of the system is that you just need to add fish food," explained co-founder Karoline vom Böckel, who specialises in strategy and research.

A small-scale prototype of their vision has boosted their optimism. In a double-decker metal structure built out of an upcycled container, they are already raising fish on the lower level and growing tomatoes and lettuce in hydroponic beds above.

Part of the system's appeal is the flexibility of the symbiotic arrangement. Meanwhile, it uses water sparingly. Just 200 liters of water are required to produce one kilo of fish, the group says, far below the average 1,000 liters used in conventional fish farms. Producing one kilo of beef requires some 15,500 liters of water, they estimate.

"This farm is not just an urban project. It could be set up anywhere -- even in places with water shortages," Leschke said.

Although the water-based aquaponic concept was invented in the 1970s, the Fresh from the Roof team say theirs will be the first rooftop garden of its size worldwide to use the technology. But as the world urbanizes quickly, finding new ways to bring food closer to the consumer is vital. By 2050 the United Nations estimates that two out of every three people on earth will live in a city (today that figure stands at one in two).

Growing awareness of this trend has sparked an urban gardening movement around the world. With predictions of food shortages in mind, architects and gardeners alike are exploring ways of growing food in metropolitan areas.

Proposals have ranged from potted plants on urban balconies to adventurous, ultra-modern plans, such as a plant-coated conveyor belt inside a 100-meter glass dome.

But Elisabeth Meyer-Renschhausen, an expert in community gardening and urban agriculture at Berlin's Free University stressed the need for low-key urban agriculture. "A simple green roof garden is a good thing but hi-tech solutions can be too energy intensive," she told SPIEGEL ONLINE. "Some of these architects' dreams simply aren't possible in the context of a future energy crisis."

The Fresh from the Roof project is just one of several such straightforward urban farming projects in the German capital. Community gardens are flourishing, thanks in part to a glut of unused space.

The Prinzessinnengarten, once a wasteland next to a busy inner-city roundabout, is one such venture. Nestled into the city's scrappy Kreuzberg district, organizers grow crops and herbs in sacks and old milk containers, reinventing the derelict site as an inner-city idyll. Not far away, two urban gardens have sprouted up in the sprawling Tempelhof Park, formerly an airfield.

This trend corresponds to a increasing consumer appetite for regional food. A survey from the Federal Ministry of Agriculture showed 65 percent of Germans say they mostly or always try to buy local produce. Although Germany's consumption of organic food increased three-fold over the past decade, locally-grown produce remains in short supply, a fact which was part of the founders' inspiration for the Fresh from the Roof project.

"Take tomatoes," explained co-founder Christian Echternacht. "They are imported from Spain, traveling thousands of kilometers. They are organic but arrive with a rucksack of greenhouse gases on their backs."

Their rooftop garden will not come cheaply, though. An estimated €5 million ($6.7 million) will be needed to set up the scheme, and the Fresh from the Roof team are still on the lookout for potential investors. Although their plan is still in its infancy, they report significant interest and say they are in early talks about the project.

"This is a gap in the market and we want to close it," Echternacht said.