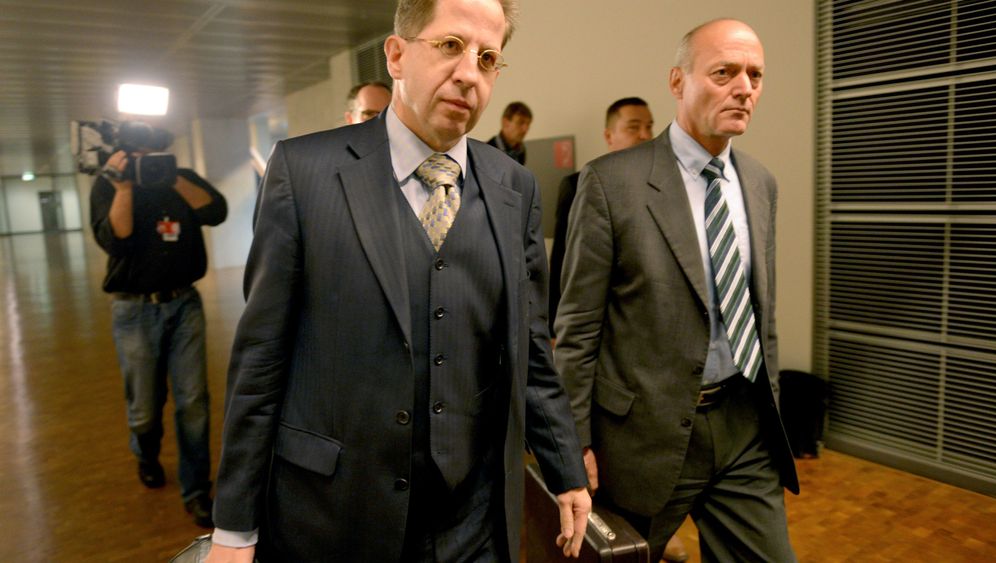 Hans-Georg Maassen, president of the Federal Office for the Protection of the Constitution (BfV), Germany's domestic intelligence agency, and Gerhard Schindler, director of the Bundesnachrichtendienst (BND), the country's foreign intelligence agency, had a great deal they wanted to discuss last Monday when they entered the square, black building in Fort Meade, Maryland, that is headquarters to America's National Security Agency (NSA). The two German emissaries had quite a few questions concerning the American wiretapping that has caused such damage to sensitive German-American relations. Since when was Chancellor Angela Merkel's mobile phone monitored, they wanted to know, and has that surveillance truly ended? Which members of the government were or still are affected by the NSA's spying program? And how can trust be rebuilt?

In a bug-proof, windowless room, NSA Director Keith Alexander gave his two "dear" guests a demonstratively warm reception. He spent around an hour engaging in the straight talk they sought. But, in terms of content, the American general didn't give the two top German officials much. Asked about the accusations of espionage, he apologized and said he couldn't say anything about that. Nor did the visitors learn whether an extension on the roof of the US Embassy in Berlin, right near the Brandenburg Gate, actually houses spying equipment.

Going in, the two German intelligence agency directors knew it would be tough to wrest any information from the Americans, who according to Merkel's chief of staff, Ronald Pofalla, have now acknowledged "the political dimension" of reporting done on this subject. Still, the meeting last Monday quickly demonstrated just how bumpy the road to rebuilding trust will be, especially since Maassen and Schindler didn't achieve any movement at all on the other request they approached their American partners with: the German government's desire for an agreement to refrain from spying on each other.

There won't be a "no-spy" agreement was the message the two German emissaries received both at the NSA and subsequently in Langley, Virginia, where they met with CIA Director John O. Brennan. At most, the US is willing to consider a vague agreement between the intelligence services, which currently exists in a draft version. As the lead negotiator on the German side, BND Director Schindler plans to hammer out the exact wording of the agreement via video conferences with the NSA in the coming weeks.

This paper, provisionally called a "cooperation agreement," is only two passages long. The first spells out areas in which the intelligence services wish to work together closely. These include such global topics as counterterrorism, nuclear proliferation, human trafficking and cybercrime. This is the easy part, since both sides already collaborate closely in these areas.

The paper's second part has proven much harder. This section addresses the sensitive matter of espionage and potential no-spy accords. But the US is offering very little leeway here. The country's concerns are understandable, since explicitly renouncing espionage operations amounts to admitting to past misdoings. Another concern here is that if a binding no-spy agreement were implemented, it would be impossible to keep it secret, and its existence would be sure to whet the appetite of other nations as well.

The German Chancellery is taking a realistic view of the matter. As much as Berlin might wish for a substantive agreement, perhaps even one binding under international law, it's clear that this isn't in the cards. And pushing the wrangling over the issue to extremes isn't an option, according to one senior German intelligence official, owing to "the importance of the trans-Atlantic alliance."

In any case, the plan is to have a document that will reorganize the relationship between the intelligence agencies complete and ready for signing by the end of the year. German intelligence sources say the US is prepared to engage in "a new form of collaboration." As close to the same time as possible, the German government also wants to issue a joint declaration at the government level, meaning either between the German Foreign Ministry and the US State Department or between the Chancellery and the Oval Office. There won't, however, be any kind of agreement that would require approval by the German parliament and US Congress.

Whatever happens, experts in the field are questioning what the actual value of a no-spy agreement would be. "It would serve first and foremost to calm the waters with the general public," says Daniel-Erasmus Khan, a professor of international law at the Bundeswehr University in Munich. From a legal standpoint, Khan says, the situation is already clear: "It goes without saying that NSA employees must abide by German law while on German soil, even if they enjoy diplomatic status." And under German law, he explains, tapping Merkel's mobile phone would be illegal no matter who does it -- Germans, Americans or diplomats of any nationality.

Tipping Off on Potential Surprises

Meanwhile, just how much the NSA knows about internal German government matters remains unknown, even following Maassen and Schindler's visit to the US. There are "no known cases beyond those currently being reported in the media" of the NSA or any other intelligence agency spying on German ministries or other authorities, the German Interior Ministry stated in response to an official inquiry from German parliamentarian Jan Korte of the left-wing Left Party.

The opposition in the Bundestag, Germany's parliament, calls this too little knowledge and too much ignorance. "Either the German government doesn't grasp the problem at all, or it considers this system of spying fundamentally proper and thus isn't taking action," Korte says, adding that he finds either state of affairs completely unacceptable. "We demand a comprehensive investigation," he adds.

So far, the NSA has only admitted to those things that are already proven and publically known. In the conversations with Maassen and Schindler, no one tried to deny that surveillance had indeed been conducted on Merkel. Likewise, it seems the American intelligence agents have judged the copy of a databank entry that first launched the phone-tapping scandal to be authentic. In the course of its investigation, SPIEGEL shared that document with the Chancellery, and the Federal Prosecutor's Office has expressed an interest in it as well.

One thing the German intelligence agency directors were offered while in the US was to be supplied with higher-quality information. The NSA has apparently figured out most of the data that Edward Snowden, the former NSA contractor turned whistleblower, was able to copy before departing for Hong Kong in May. What's more, NSA Director Alexander has announced plans to put together a "Germany package" containing the material that Snowden is likely to release in the coming weeks.

Were this to happen, it would amount to huge progress for Berlin. Instead of being perpetually caught off guard by fresh revelations, the German government would have all the information at once, delivered directly to the Chancellery.