The clanging of dishes echoes through the refectory, the abbey's dining area. Monks sit at long wooden tables, silently spooning up their bouillon-and-pancake soup. There is entertainment on offer for the evening meal: One of their fellow monks is reading aloud a book about the first Christians in antique Rome. Back then, they were a sect that lived in small communities, on the edge of society.

The walls of the dimly lit refectory are decorated with painted Bible scenes. The floor is adorned with mosaics. Most of the tables in the space, which is as big as a gymnasium, are unoccupied. In the monks' neighboring living quarters, the so-called cloister, entire floors are deserted. Many rooms are empty or used as storage spaces. In many cases, their inhabitants died long ago.

There was a time when as many as 300 monks lived here, in the Archabbey of the Benedictines in Beuron, in the southwestern corner of Germany. But that was 90 years ago. Now, that number has shrunk to 39 -- and is likely to continue to fall. The monks' average age is 68. The oldest is 91. Archabbott Tutilo Burger, who has headed the abbey since 2011, has no illusions. "We'll be around for another 30 years," says the 53-year-old.

German society is moving away from spirituality, from religion, and especially from the church. This development is felt particularly strongly among religious orders. They are dying out. Everywhere, monasteries and convents are disappearing.

The German Conference of Superiors of Religious Orders (DOK), an association of Catholic congregations, has adopted a novel strategy to try and keep live-in religious communities from dying out: As of recently, women and men of any age can "live, pray, work and learn" in a monastery for three to 12 months as part of a "voluntary year," as its home page says.

The participants don't commit to anything. "One can leave at any time," says Sister Maria Stadler, who organizes the program. She says it is all about making people more familiar with monastic life and all its spiritual aspects. "The day is permeated with prayer. This can provide stability," says the nun. But there are risks, she adds. Applicants should have a "certain psychological stability." Far from all activity, she says, one becomes very introspective. There is a lot of time to think. Too much time?

The abbey in Beuron now offers getaways for stressed city-dwellers.

Thus far, there have only been a few candidates who have been seriously interested in a multi-month stay in a monastery. In Austria, where the offer has existed since 2016, about 30 women and men have taken part to date. Of those, four later decided to pursue a monastic life. Then two changed their minds. Not a great outcome.

It's hard to overcome the challenge of finding new members. Most people no longer have any desire to commit themselves to a monastic community forever. Modern life is simply too attractive, religious sociologist Detlef Pollack says. Not to mention the vow of chastity -- who wants to live a life of celibacy?

The divide between religious strictures and individual freedom quickly becomes evident in a monastery: On the one side, there is strictly regulated daily routine of the monastic community, always in the same place, always at the same time; on the other side, there is the flexibility of the outside world, where people can divide up their time as they see fit. Even people who are attracted to a monastic way of life generally don't want to experience it for more than a few days.

Graphic: The decline in members of religious orders in Germany

Germany's monasteries are also placing a greater emphasis on tourism. In Beuron, the guest wing is now the most economically successful division of the archabbey. It offers a space for contemplation for stressed out city-dwellers. Archabbott Burger finds it important that the Benedictines offer visitors "hospitality, not wellness."

Most visitors are solitary travelers. And there are many older, regular guests. Elisabeth Lauer, 73, has been coming to Beuron every year since 1986. A nurse by training, Lauer says she can only enjoy it there alone. Lauer lives in Switzerland. "Here, in the Danube Valley, one is well protected and well taken care of," she says. Lauer says the singing of the Benedictines also helps her in her contemplation.

The monks are woken up by the building's bell at 4:40 a.m. After they rise, they sing hymns in the abbey church. The Beuron monastery has existed for almost a thousand years. The Benedictines took it over in 1863. The order's most famous dictum is "ora et labora," meaning "pray and work."

After the morning prayer, the daily activity begins. In Beuron, every monk has an assigned task. Two brothers work in the monastery's art-publishing company, others take care of the big garden, the schnapps distillery or the 18 beehives.

The work is only interrupted by prayer. At regular intervals, they all shuffle into the abbey church. Archabbott Burger leads the way. Life in a monastery has fascinated him ever since he was a "little kid," he says. Burger had a Catholic upbringing in the southern German region of Baden. As a child, he was an altar boy. At home, he re-enacted mass -- with real incense, much to his mother's chagrin. "I became a Benedictine to search for God and follow Christ," the archabbot says. The most difficult part, he says, is managing the discrepancy between the demands of the Gospel and human limitations. And then there is also the fact that something is coming to an end: When Burger joined the abbey in the summer of 1986, when he was only 20, there were around a hundred other monks living there. "I have helped carry 70 of them to the cemetery," he says.

The 84 hectares (210 acres) of land belonging to the formerly self-sufficient archabbey had to be leased out in 1996. There weren't enough laborers to cultivate them. The abbey's butcher and tailor shops also had to close.

The shrinking of the monastic community can also be felt in the neighboring village of 120 people: Of the seven restaurants that once existed, only two remain today. Gone are the days in which thousands of pilgrims would arrive in special trains every year to pray in front of a 15th-century pietà in the Chapel of Grace.

In the sixties, the monastery was a spiritual center, a source of inspiration for the Catholic liturgy. "Those days are over. That's not who we are anymore," says Brother Sebastian, 42, who is responsible for taking care of the abbey's guests. He plans the annual program for the visitors, from mindfulness exercises to a Christian form of Zen meditation.

The average stay lasts three days. Then those searching for meaning disappear again. The monks, in their gigantic abbey, remain.

Experts on religious orders says it is often difficult for novices to integrate into such communities. Because of the advanced ages of the occupants, many monasteries are akin to senior citizens homes.

"When I am in a mass, I often think, wait a few more years, then the choir stalls across will be empty," says Brother Sebastian. Religious people often tell him how calming they find the notion that the Benedictines always pray and sing at the same time and same place, on behalf of all people. Father Sebastian says, "It is important that people can count on us, no matter if we are 100, 50 or 20 monks."

When monastic communities shrink, they often run into financial problems. The maintenance of their often large buildings is expensive, and the Beuron abbey requires state funds. Another Benedictine abbey located 70 kilometers (40 miles) away in Weingarten, near the city of Ravensburg, was forced to close in 2010. In recent years, it was also used to house refugees and will now become an academy.

Monasteries are being disbanded and their buildings put up for sale. They can often be found on real-estate portals, listed as "property with character." Specialized agents can get prices in the millions for the old buildings. They are then turned into co-working spaces or luxury housing.

For real-estate investors, monastery facilities are often attractive. Remigia Ternes, the superior general of the Sisters of St. Joseph in the western German city of Trier, has already fielded a phone call about this very issue. The caller asked whether the 77-year-old might be interested in selling the abbey, with its 11,500 square meters of garden and its location in the center of the city.

Thirteen sisters still live in the huge, red sandstone building located near the Porta Nigra, the Roman city gate. The order once had 168 nuns from all across Europe. For decades, the Sisters of St. Joseph have taken care of financially disadvantaged women. They organized educational offerings, worked in prisons and ran housing for mothers with children. On retreat days, they invited people into the abbey, with its 53 guest rooms, to take part in spiritual exercises.

To sell all this after 130 years of charitable work? Sister Remigia turned down the caller's offer and hung up. "For us, it's about maintaining this piece of earth, and not just being tossed on the market somehow," she says. The Catholic sisters founded a charitable foundation to which they will transfer their ownership. In this way, they want to ensure that the order's goals will continue to exist beyond their own death. And that the foundation's capital be used to continue supporting women in need.

Four of the Sisters of St. Joseph are under the age of 80. The youngest is 64. Sister Remigia first noticed in the '90s that the order could one day die out. It's been a long time since there have been any young applicants. That is partly due to the emancipation of women: In previous eras, joining a convent was one of the few options many women from Catholic regions had to live a largely self-defined life, independent of men.

The older sisters are sad that no new nuns are coming. "But lamenting and complaining won't help us any," Sister Remigia says. At her instigation, the big refectory in the first floor was given up. The heating was too expensive. The nuns have also retreated from the third floor. The plan is for that floor to be turned into housing for women facing old-age poverty.

Sister Remigia is driving the change. Since 2006, she has turned a side building of the abbey into student housing. Twenty-eight people from around the world live there now. The students bring life into the convent. When they party on the field behind their building in the summer, it's the superior general who has to deal with the calls from unhappy neighbors.

Ternes has long ago given up her veil. "Otherwise I hear so badly," she says. When there is no priest who can lead mass in the abbey, the superior general leads the service.

After 55 years in service of the order, Sister Remigia has made peace with the coming decline. There is only one change that annoys her. Since 2018, an approximately 5 meter-tall (16 foot) statue of Karl Marx has stood across from the abbey's walls. It was a present from the Republic of China to Marx's birthplace. Now an effigy of the man behind communism, an anti-religious movement, is always looking towards the abbey. "That is simply awful," Sister Remigia says. 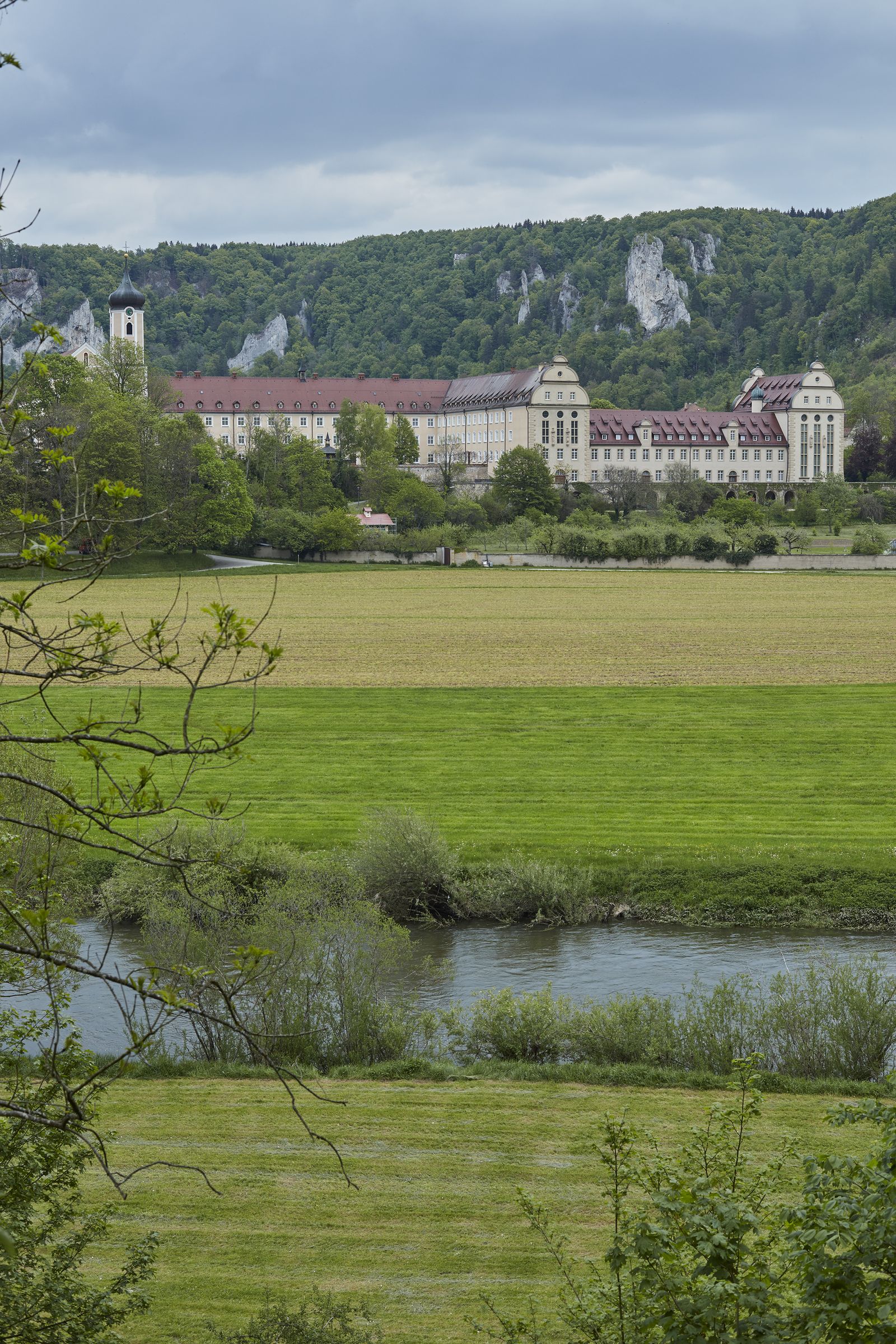 The abbey in Beuron now offers getaways for stressed city-dwellers. 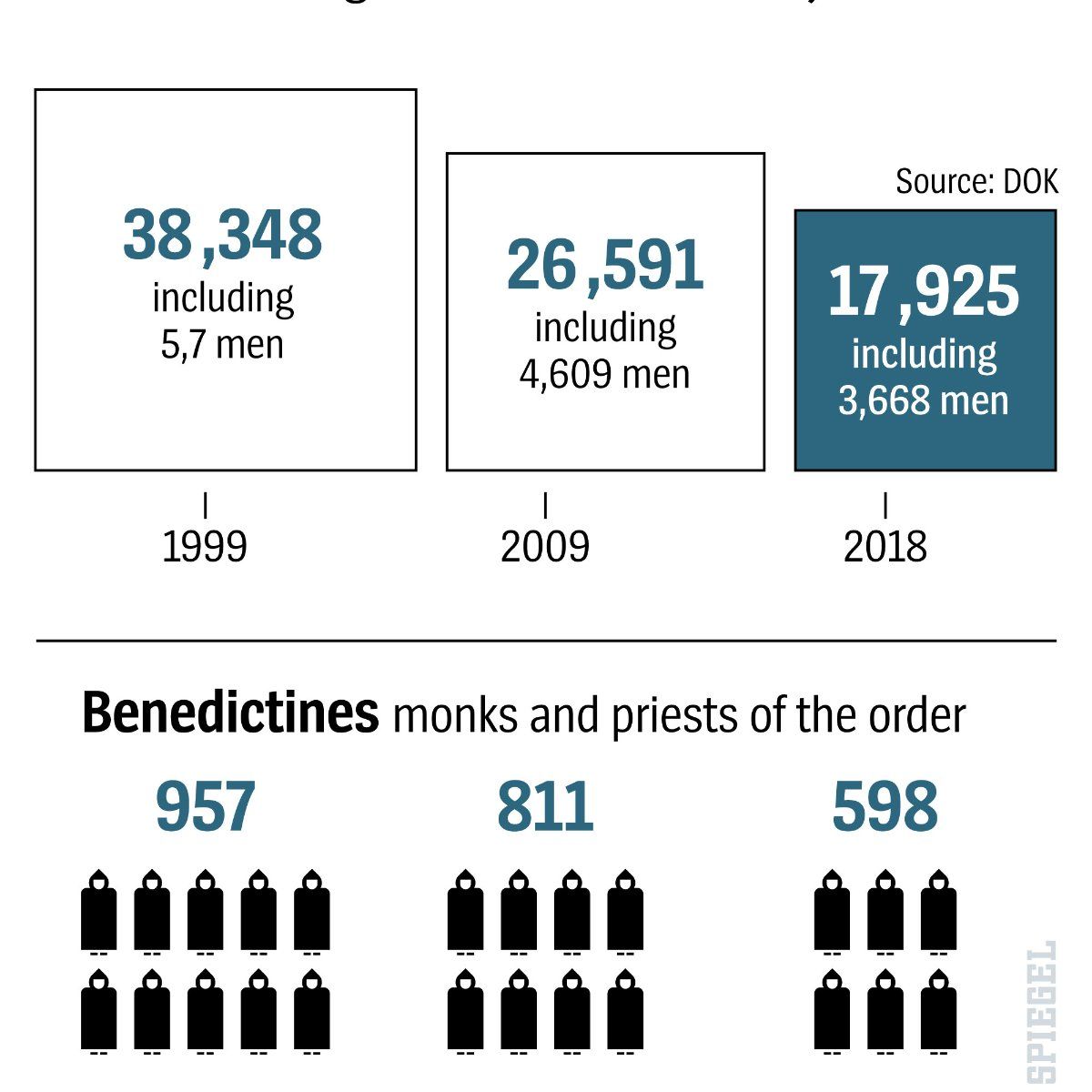 Graphic: The decline in members of religious orders in Germany