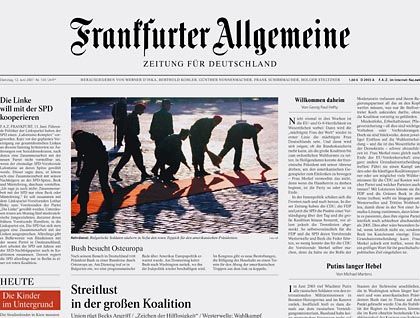 This is what the conservative daily Frankfurter Allgemeine Zeitung could look like soon -- a far cry from its previous style.

The readers of the German conservative daily Frankfurter Allgemeine Zeitung will soon have to be very brave. They are only a few days away from something they don't like at all: change.

For decades, no matter what was going on in the world, there was one thing that could be relied on: the FAZ's practically unchangeable front page. It hardly ever featured a photograph: Only 33 times in 58 years did an image grace the cover, the last time being when Benedict XVI was elected pope in 2005. And the editorials were always flagged by having their headlines printed in old-fashioned Gothic script.

The FAZ's cover page was the serious face of conservatism. True, there were occasional attempts to introduce some cheerfulness. But readers defended the paper's drab image as a bastion against colorful modernity; even the most minimal changes provoked major annoyance. "Tabloidization," furious readers would rail in their letters, complaining that the paper was "pandering to the zeitgeist" in a way that was "unworthy of the FAZ." Even worse, the readers accused the FAZ of stooping "to the level of the Springer press," in a derogatory reference to the publisher of Germany's biggest tabloid, Bild.

When the editors added a small red box measuring a mere 1.9 by 5.5 centimeters (0.75 by 2.17 inches) to the cover page, the readers immediately detected "lurid curlicues" and a "wild mix of colors." One reader complained that, "once again, a piece of the homeland has been sacrificed on the altar of progress."

That was what the paper used to be like -- and what its readers are still like. One hardly wants to think about what shock waves will run through the letters' page when the paper actually presents its new layout for the first time on Oct. 6. Because this time around, it's not just a little inconspicuous tinkering with the font. This time, the paper is daring to break with tradition and take the plunge into modernity.

Not only does the new layout feature a photograph on the front page, but it's a color image at that. Both the previously sacrosanct Gothic script above the editorials and the lines between the columns have gone. The new layout introduces a new and very elegant font for the headlines. It's lighter and friendlier, with more white space. And far from being the creation of some internationally renowned design guru, who could have provided a scapegoat if necessary, the new layout was developed entirely in-house.

But is the new image enough to solve the problems of the FAZ, a paper that was previously characterized less by a particular look than by an absence of design? Can a makeover put an end to the continuing erosion of the FAZ's circulation and a creeping decline in the paper's significance?

And the problems the paper faces are serious. Its paid circulation has shrunk by more than 40,000 during the past nine years. During the same period, the FAZ's main rival, the center-left Süddeutsche Zeitung, increased its own paid circulation by about 19,000.

The FAZ is lagging behind its arch-rival, the Süddeutsche Zeitung.

The Munich-based Süddeutsche has been outpacing its Frankfurt rival ever since it braved the media crisis at the start of the decade. For some time now, the FAZ has been unable to pretend it is still the only "Newspaper For Germany," as the caption on the front page would have readers believe -- even if the FAZ still likes to look down on the Süddeutsche as a jazzed-up regional paper. (The Süddeutsche does in fact still sell the bulk of its copies in Bavaria.)

It is precisely this huge expectation that the paper sets for itself -- that it is a German institution practically on the same level as the constitution -- which has become a burden for the FAZ and its staff. Confusion reigns behind the newspaper's self-confident facade.

Young editors in particular are finding that the paper's old-fashioned personality is getting on their nerves. They would rather venture out into the turmoil of reality than act as the keepers of Germany's true conservative values as espoused by the Christian Democratic Union party. To these young editors, editorials are no longer the be all and end all of journalism. They would like to see more reporting in the paper -- just like their rivals have.

But the FAZ has never done anything the way other papers do it, and it was always proud of that fact. The astounding thing is that even its own high priests have recently begun showing a lack of veneration for the sacred front page.

Werner D'Inka, the chairman of the editorial board -- one tradition the paper maintains is not having an editor-in-chief -- sounds like he has been relieved of a great burden: "The old layout was hard work," he says. "And people are really sick of the Gothic script."

But D'Inka and his four colleagues did not rely just on their own opinion when they decided to give the paper a new look, but also used reader surveys and focus groups. Readers were presented with three sample layouts. The middle option was chosen -- the moderately radical one, so to speak. The readers rejected both a more far-reaching modernization with more images on the front page and a half-hearted variant with a tiny image at the top of the page. The FAZ too is moving closer to the center, it seems.

A Lack of Joie de Vivre 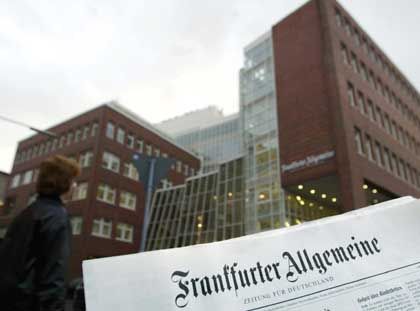 The FAZ building in Frankfurt.

What is odd, however, is that the paper has managed to pull off the stunt of changing its layout while otherwise remaining exactly the same: The FAZ's transformation does not include a single new idea in terms of content.

D'Inka speaks of the paper's "high barrier to entry" and the need to "make it accessible." It sounds like he wants to say what politicians do when their message fails to get across: It's all just a communication problem. There is nothing wrong with the content.

But in fact it is precisely in that area that the FAZ is on the retreat. The political commentators seldom bother to move beyond idiosyncratic conservatism. The vigorous debating culture that once made the paper great has now disappeared.

What's missing is reporting and a bit of light-heartedness, a little humor and a certain joie de vivre -- all things that the Süddeutsche manages quite effortlessly. "When you read the Süddeutsche, you have to laugh three or four times every day," one FAZ editor says. And what about the FAZ? The editor does not reply, but only smiles silently.

Others are more explicit: "The FAZ is reader-unfriendly," says newspaper researcher Horst Röper from the Dortmund-based media thinktank Formatt Institute. It makes no effort to represent complex issues in a way that non-experts can understand them, he says, adding, most damningly of all: "The paper is boring."

The only person who ever manages to generate any excitement is co-editor Frank Schirrmacher. He once devoted the entire feature pages to printing a section of the human genome, a long series of different combinations of the four letters C, G, A and T. He also helped to push forward the recent debate on German author and Nobel laureate Günter Grass, after Grass admitted to having been a member of the SS, by publishing an interview with the writer. Schirrmacher's colleagues, especially those from the political desk, tend to find his knack for self-promotion somewhat off-putting. They prefer to remain in the background. 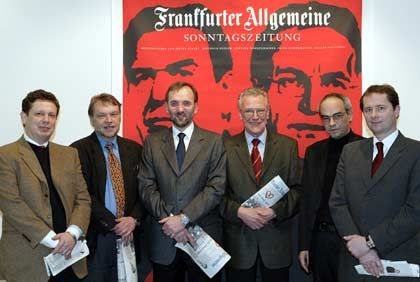 In this 2003 file photo, the FAZ editorial board and their art director accept a design award for the Sunday edition, which was started in 2001. From left, Frank Schirrmacher, Günther Nonnenmacher, Berthold Kohler, Dieter Eckart, art director Peter Breul, Holger Steltzner. Co-editor Dieter Eckart was replaced by Werner D'Inka in 2005.

Georg Paul Hefty is one of the paper's best-known commentators. He stands for everything the FAZ's left-wing enemies despise: its conservatism, its closeness to the CDU, and its defense of former German Chancellor Helmut Kohl. "When he writes, the FAZ turns into Pravda," the left-wing Die Tageszeitung once wrote about Hefty.

For Hefty, constancy is a positive thing. "I have never changed," he says. "All that has changed is the world around me." He expects something of the same from his paper.

Hefty recently wrote about a strategy paper on neo-conservatism by Markus Söder, the general secretary of the CDU's Bavarian sister party, the Christian Social Union, and his associates. One sentence in his piece could almost be a description of the FAZ itself: "They have nourished the assumption that conservatism is not an independent force, even within the CSU, but rather a sequence of more or less accepted clichés."

The FAZ often seems similarly formulaic. But it's usually no better when it occasionally attempts to cover up its own insecurity by heavy-handedly declaring war on everything it considers modern.

This is currently clearest in the "family policy arms race" the paper believes it has discovered and with which it hopes to gain the attention of its regular readers. Children's day care is presented as if it were the root of all evil: "Nurseries create what the government is allegedly fighting against." A sentence like that isn't made any nicer by a new layout.

Left and right, conservative or liberal -- those are the worn-out categories that the FAZ trots out every day.

Hefty believes the majority of people in Germany are left-wing or at least left-leaning liberals. "That's what is behind the Süddeutsche's success," he believes. "The political balance in Germany works in its favor."

But perhaps the reason for the Süddeutsche's success is simply the fact that what the FAZ most likes to do -- writing about other institutions as an institution itself -- has gone out of fashion. That's not something a photo on the front page can fix.

But what is more interesting than the question of what the FAZ will look like, is the question of how the paper would like to look. What image of itself does it want to convey? The advertising campaign that the paper has launched to coincide with its makeover is quite revealing in that respect.

The campaign no longer uses images of former German Chancellor Helmut Kohl standing on a gargantuan container ship. That was conservative, statesmanlike and somehow clunky. Now the FAZ is trying to woo new readers with images of people like Family Minister Ursula von der Leyen, a glamorous working mother of seven, of all people.

She too is conservative -- but also nicer, somehow. The effect is reinforced by the fact that she is shown standing in front of a field full of white rabbits.

The FAZ seems to mean business.