They call themselves the GnuHonnters, a take on the English term "new hunters." Their motto is: "Comrades in spirit. Many colors, but one entity." It refers to the fact that they support different soccer clubs. Three weeks ago, some of the members met at a small celebration in Berlin, as one hooligan group marked the 30th anniversary of its founding. There was beer, rock music, strippers and table dances. Eventually, one of the guests, a tattooed tank of a man with a bald head, trudged through the room with a giant snake on his shoulders.

The GnuHonnters are a consortium of 17 different soccer hooligan groups from all over Germany. Hooligans have traditionally battled each other, but now they have teamed up to form a network to fight together for a common cause. Worryingly, they are increasingly being supported in their efforts by violent right-wing extremists.

In the past, Western Europe was beset with violence at football games caused by troublemakers among each club's group of fans. But, in recent years, hooligan activity has been successfully suppressed by massive police operations with the cooperation of ordinary fans inside the stadiums of German professional football clubs playing in the two divisions of the Bundesliga, the country's top soccer league.

In response, the thugs have taken to fixing a time and a place with each other beforehand, so that they can meet and fight away from the stadiums and out of the public eye on grassland and fields. But now hooligan culture is on the rise again. Fan commissioners from Aachen, Braunschweig, Dortmund, Düsseldorf and Frankfurt report that hooligans who were active as long ago as the 1990s are once again showing their faces in the stands.

'Planned and Well-Organized' Attacks on Police

The Central Sporting Operation Information Center, a police body that tracks football violence, has attested to the fact that, in the fan bases of the Bundesliga clubs, there has been an increase "in right-wing motivated behavior" in the violent hooligan scene. At 16 clubs, the center identifies a crossover in membership between the football and far-right scenes. The Federal Office for the Protection of the Constitution, Germany's domestic intelligence agency, has spoken of a 15 percent overlap between football-affiliated hooligans and right-wing extremists. However, security officials in the Ruhr region of western Germany say the real figure is likely to be much higher.

In a trial involving the Elbflorenz hooligan group in Dresden, it emerged that many of the thugs work together. "There are repeated instances of violent attacks on police officers involving hundreds of hooligans on the fringes of football games -- planned and well-organized. We realized that there were increasingly violent right-wing extremists among them. Apparently they use the hooligan clashes as training," said chief prosecutor Jürgen Schär, who led the prosecution of the Elbflorenz hooligans, according to the Dresden-based daily Sächsische Zeitung.

Schär further revealed that hooligans and neo-Nazis had met together in remote forests for weapons practice.

"Since we started aggressively pursuing right-wing gangs, their members changed the focus of their activities to hooliganism or autonomous neo-Nazi groups," Schär said. "For us, it has become more difficult to catch them."

Thugs and the far-right seem to particularly like the football environment, and there is also an enemy at hand in the form of so-called "ultras." In many European countries, ultras are traditionally a club's most passionate fans, traveling to all the games and making the most noise in support.

For many ultra groups in Germany, in particular, being a fan goes hand in hand with certain political themes. They support anti-racism campaigns and demonstrate against commercialization. That does not fit with the hooligans' ethos, as it goes against their macho and violent world. Hooligans tell the ultras that they want "no politics in the stadium." It's an old slogan that right-wing exremists have used for years to infiltrate amateur sports clubs and youth movements. They want to win over young people through this ostensible separation of sport and politics, and to create a national consciousness through common fashions and music or attending openly right-wing speeches. It's subtle agitation.

Members of the GnuHonnters are easy prey. Like many right-wing extremists, they have a common enemy: They also consider the often left-wing orientated ultras a bane.

The GnuHonnters network was founded on a farm in the town of Leichlingen, in the western state of North Rhine-Westphalia. Back then, at the beginning of 2012, the meeting was made up almost exclusively of old-time hooligans with paunches. Members of the Borussenfront, a group of hooligans associated with the Borussia Dortmund club, sent out the invitations, and it was the perfect chance to drink beer and reminisce over battles past. That's how the event was described by one person who has since attended more meetings of the hooligans.

From meeting to meeting, the number of people in attendance grew, with many more younger hooligans, martial artists and youth squads. They met sometimes in Frankfurt, sometimes in Berlin, and never in the same place twice. A crude pamphlet was written and has acted ever since as a kind of mission statement. Top priority: "Re-establishing old values." Second goal: "No anti-fascists in the stadium." Third goal: "Win back freedom of speech."

Attacks by right-wing hooligans on left-wing fan groups have been on the rise for months. The most prominent example is with the long-established club Alemania Aachen, whose ultras fan group, Ultras Aachen, was forced out of its own stadium by continuous attacks from the far-right.

Trouble in the Stands

For many ultra groups, Aachen is an example of who ultimately holds the actual power in the stands -- those who are physically the strongest. The members of Eintracht Braunschweig's ultras, Ultras Braunschweig 01, are currently experiencing something similar. For weeks, they have been intimidated by their own hooligans. During the game against Borussia Mönchengladbach, there was a brawl in one stand occupied by home fans. As the stewards escorted the ultras out, the club's hooligans sang racist and homophobic songs. A few days after the incident, Eintracht punished the ultras, which shows just how powerless football clubs are against right-wing violence. In recent times, there have also been attacks by right-wing fans on left-wing ultras in Dortmund, Dresden, Duisburg, Düsseldorf, Frankfurt, Munich and Rostock.

On the outskirts of the Ruhr region, in a small café right next to a lake, a member of the security services, who prefers to remain anonymous, lays out group pictures of the GnuHonnters. Old and young people pose together, some giving the Hitler salute. The investigator moves his finger over their heads, saying their names in turn. According to him, they are right-wing extremists from Berlin, Braunschweig, Cottbus, Dortmund, Dresden, Duisburg, Essen, Frankfurt and Munich. There are cadres from the right-wing extremist National Democratic Party (NPD), too. The agent explains how you can estimate the size of the GnuHonnters. The group appears to contain up to 300 people if you look at a photo from the last meeting.

But little can be done at the moment to combat them. The authorities need to first agree on responsibilities because the network is constantly active in different German states. In addition, the group rarely actually breaks the law -- the Nazi symbols of individual members, which are illegal in Germany, would not be enough to justify suppressing the whole organization. The investigator believes that the group will grow even larger in the coming weeks.

Gerd Dembowski, sociologist and fan researcher, also believes that right-wing hooligans will grow stronger. For many fans, the idea of ultras is "simply too trendy," especially for younger fans, who are increasingly turning to hooliganism.

"The hooligans are also experience-driven like ultras, but with a clearer structure," says Dembowski, who advises Bundesliga clubs in their anti-discrimination work. But he criticizes clubs for putting too much emphasis on slogans. "Eighty percent of anti-discrimination work is symbolic politics with posters and flyers," he says. "The clubs must teach their employees, appoint integration commissioners, strengthen fan projects. Football now has an immense social responsibility, which it must meet."

A few minutes before the Bundesliga game between Borussia Dortmund and VfB Stuttgart, a booklet is distributed by volunteers. The match, being played on a Friday evening under floodlights, is a big stage for Dortmund on which to confront the problem of right-wing extremism among the hooligans and ultras who follow the club. In the leaflet, there are neo-Nazi codes and how to decode them. In this way, fans can be more aware of far-right activities in the stadium.

Shortly before kickoff, a member of the far-right Dortmund hooligan group Northside climbs the fencing surrounding the immense Südtribune, one of the largest football stands in the world. He rips his T-shirt, exposing his toned body. Then, with his right arm, he gives a Hitler salute. The singers within the ultra group called "The Unity" can only look on from their spot in the stand. 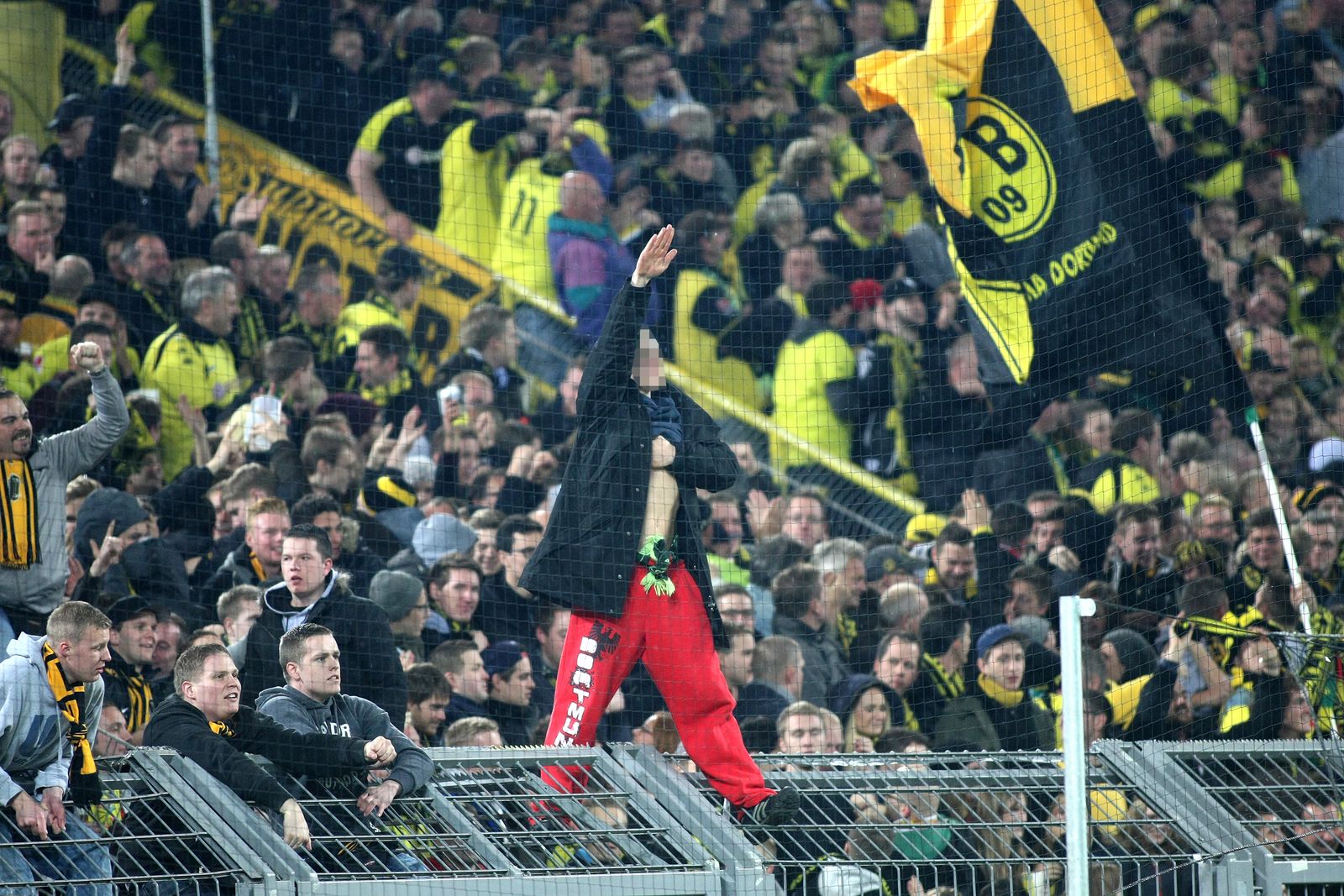