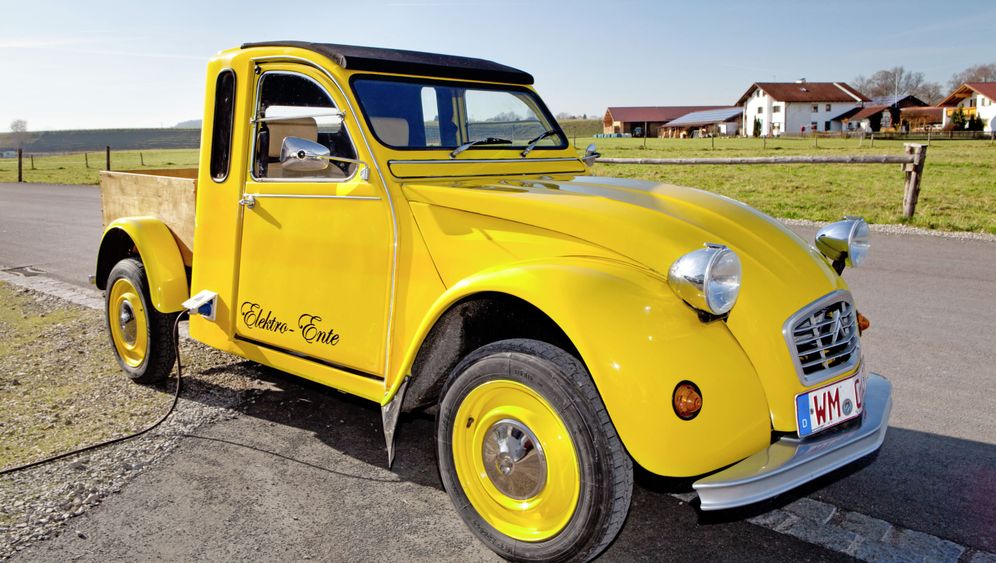 The development order was issued in the fall of 1935 and was the culmination of a vast wealth of experience. The Great Depression had been surmounted, and Europe's economy resembled a field fresh for the tilling. Pierre-Jules Boulanger, then vice-president and head of engineering and design at the French carmaker Citroën, tasked his engineers with developing the practical vehicle.

Boulanger wanted "a car for two people and a sack of potatoes that could drive straight across fields using just three liters per 100 kilometers (0.8 gallons/62 miles) while not breaking any of the eggs in the basket on board." In the years to come, the fact that the engineers didn't succeed in fulfilling all of these conditions did little to reduce the renown of the product that arose out of the legendary specifications sheet.

World War II delayed the car's development for six years. But October 1948 saw the debut of the Citroën 2CV, a bare-bones vehicle that initially boasted a two-cylinder, 9-horse-power engine that made a tinny, clattering sound as well as a retractable roof that opened like a sardine can. In fact, at the car's unveiling in Paris, someone is said to have asked: "Does it come with a can opener?"

In Germany, the Citroën CV2 is fondly known as the "Ente," or "duck." Despite its initial derision, the somewhat anemic vehicle would go on to achieve cult status among the gentle-souled refuseniks of automotive performance. Over 5 million models have been produced and, strictly speaking, its manufacture has yet to be completely disrupted.

In the southwestern Bavarian town of Hohenfurch, two body-shop workers operate a recycling station for dilapidated 2CV models that has become something resembling a factory for new cars. There, Wolfgang Hoffman, the former owner of a Citroën dealership, and his son Felix produce entirely new frames for the vehicles with the official approval of both the manufacturer and the TÜV, a safety-certification organization. Indeed, they enjoy a government-issued license to solder, so to speak.

Wolfgang describes the discarded vehicles as "donor ducks," which primarily supply parts for the new vehicles' exteriors and interiors, whether they are windows, dashboards, interior panels or the like. Since most of the vehicle bodies are custom-built out of plastic, the restorers enjoy ample leeway when it comes to making variations. Indeed, they plan on making convertibles, flatbed trucks and even stretch limousine models. With so many alterations, though, it's fair to ask whether they are resurrecting old ducks or disturbing their eternal slumber in automotive-engineering paradise.

Felix assures that the duck is "absolutely customizable" and points toward his latest creation, which he claims would be the "ideal advertising vehicle." It's a bright-yellow pickup prototype. While its wooden cargo bed gives a nod to the rural roots of the duck's original incarnation, its electric drive train is a look to the future.

Andreas Mück and Christian Kühnhauser, two engineers from the nearby town of Oberammergau, executed the drive-train conversion. The two make their living for a range of clients, including those in the armaments and aerospace industries, but for them converting the cult vehicle is the engineering analogue of a religious experience.

With his nostalgic high-tech offensive, Mück is doggedly pursuing a mission. More than anything, he would like the prototype to serve as proof that it's possible to have a functional and affordable electric automobile with the right approach. "The duck is the ideal electric car because it's light," he says.

Indeed, together with its battery, the demonstration vehicle weighs less than 700 kilograms (1,500 pounds). This allows its designer to travel reasonable distances with only a small battery, which lowers his expenses even further. Mück and Kühnhauser have settled on a small, box-shaped lithium battery manufactured in China, which sits comfortably behind the passenger seat and stores just under 10 kilowatt hours of energy.

With this and its rather modest 20-horsepower engine, the e-duck can reportedly travel about 100 kilometers. Indeed, what Mück calls the "classic car with electric drive fit for everyday use" is just about as anemic as the original. If it ever went into mass production, it probably wouldn't cost much more, either.

It seems simple enough, but it's only a good fit for those who aren't particularly concerned about surviving serious car accidents. Indeed, the passive security of the duck is hardly better than that of a motorcycle. And, given the importance of avoiding extra weight, it's unlikely to improve in the course of its conversion into an electric vehicle.

The duck is light and inexpensive, but the only protection it can offer passengers is its sluggishness. But, as Wolfgang Hoffmann says: "People already understand that a car is safer when it doesn't go very fast."