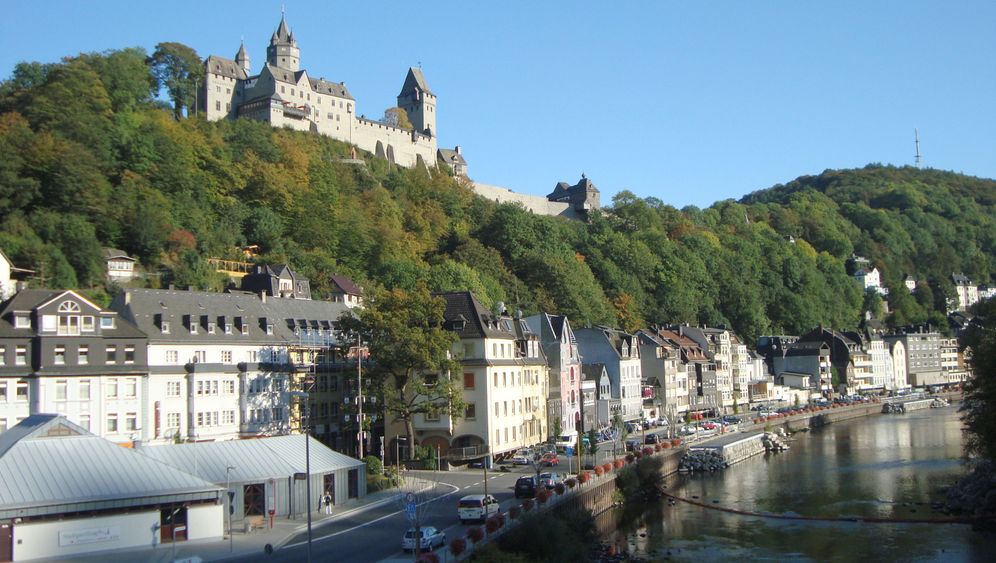 The school bus was one of the first things to go. Then, one by one, store owners and residents pulled out, leaving behind crumbling buildings and boarded-up windows. On a recent Wednesday afternoon, the small German town of Altena is all but deserted.

"This is where I grew up," says Ulrich Hins, a 71-year-old retired resident, pointing toward a pale yellow house along Altena's main pedestrian thoroughfare. Down the street, "To rent" signs hang in darkened storefronts. "Now even the bakery only opens once a week," Hins says.

Altena lies in the rugged hills south of Dortmund in the western German state of North Rhine-Westphalia. It was once known for its steel mills and booming textile industry, but decades of economic stagnation have led younger generations to search for better prospects elsewhere, leaving many older residents behind to fend for themselves. From 32,000 residents in the early 1970s, only about 18,000 remain. Local government projections show that, by 2020, more than 35 percent of residents will be over the age of 60.

While a graying population affects Germany as a whole -- about 27 percent is over the age of 60, according to the Federal Statistical Office -- rural communities like Altena have been hit the hardest. With declining birthrates, high mortality and younger families moving to cities, many residents in Altena wonder whether their town will survive at all.

But Andreas Hollstein, the mayor of Altena, has a plan to at least slow the effects of what may be an inevitable decline. He is asking his citizens to help out -- for free. "The truth is that the state is reaching its limit, and we can't finance everything we'd like to," Hollstein says. "When that's the case, we have to go back to the basics and rely on our citizens."

These days, younger and older residents in Altena pitch in where they can. Since 2008, they can sign up at Stellwerk, a volunteer coordination center, to help their struggling community. A volunteer-run bus, called the "Bürgerbus" (or "citizen bus"), ferries older residents around to buy groceries across town or use the swimming pool in the next village. Retirees babysit children of single or working parents, and younger volunteers teach arts and crafts to nursing home residents. Even the local high school has gotten involved. As part of the seventh-to-ninth grade curriculum, students have set up a business to help elderly residents with daily chores -- from walking the dog to mowing the lawn.

As a result, in 2008 and 2011, Altena brought home the first prize in an "Idea Competition" sponsored by North Rhine-Westphalia. The award recognizes particularly innovative projects at the municipal level. "We have over 1,000 citizens who have stepped up," Hollstein says. "For such a small town, that's incredible."

And Altena isn't the only town to get residents involved. A study by the nonprofit Berlin Institute for Population and Development finds that, with a shrinking population affecting two-thirds of Germany's rural communities, private and state-run projects are now focusing on community-based solutions in an attempt to counteract demographic trends.

"Civic engagement is a fundamental issue," says Hans Jörg Rothen, a project manager at the Bertelsmann Stiftung, a nonprofit think tank advocating social change. "It's important to involve citizens and to include them in the decision-making process."

As part of an ongoing project, the Bertelsmann Stiftung recently compiled a report on expected demographic trends between 2009 and 2030 in municipalities with over 5,000 residents. In addition to publishing the data online, the foundation's Web portal, called "Municipal Guide" (Wegweiser Kommune), provides local authorities with concrete ideas for dealing with rapidly declining and aging populations.

The small town of Eggesin lies some 700 kilometers (435 miles) northeast of Altena, in the northeastern state of Mecklenburg-Western Pomerania. The community has lost about half its population over the past few decades. Those remaining are mostly elderly -- the average age is 54 -- and face difficult economic prospects.

With money tight, it has implemented an innovative, grassroots initiative that focuses on using time as an alternative form of currency. Those who have the time but little cash to spare offer services such as babysitting, assisting elderly neighbors with repairs or minor construction, or teaching computer classes. In exchange, volunteers receive help from other residents, whether it's with gardening or a ride to the supermarket.

Nevertheless, many towns in Germany may need more help than their citizens can provide. "The further a small town is removed from a city, the faster it will shrink," says Manuel Slupina, a researcher at the Berlin Institute for Population and Development. "One of the reasons is that young people want to study and have to move to a big city. And then they want a job that fits their qualifications." According to Slupina, even with stable birthrates and an estimated 100,000 immigrants every year, Germany will still lose 17 million residents by 2060. "Civic engagement can only partially close the gap," he says.

When it comes to Altena, no one knows whether the combined efforts of its residents will be enough to keep younger generations from leaving. Sixteen-year-old Lea Burgardt has her doubts. As a 10th-grade student in Altena, she has volunteered to teach seniors classes on how to use mobile phones. And though she says she enjoys helping out in her community, she still plans to move away after graduation. "I never thought Altena was that great," Burgardt says. "I mean, it's tolerable."

Other residents, however, are cautiously optimistic. Renate Schwager, 60, a retired sales assistant, has mostly lived in the outskirts of town since 1973. She now shops at a volunteer-run local store that also functions as a community center. And when Schwager bought a new touch-screen mobile phone, volunteers from the local high school helped her figure out the new technology. "I do think that some things are changing," she says.

Back in the central part of town, a brand-new wheelchair-accessible boardwalk hugs the banks of the Lenne River. Neat clusters of bushes defy the winter chill, carefully tended by Altena's volunteers as part of an "adopt a plant" initiative. Not far from the town's volunteer-run art gallery, the retiree Hins points at cheerful patches of yellow wool festooned across a concrete bridge. "Our knitting group made these," he says.

As to whether Altena's volunteers will be able to revive the town's flagging center: "The prognosis is still bad," Hins says. "But it's not as terrible as it used to be."