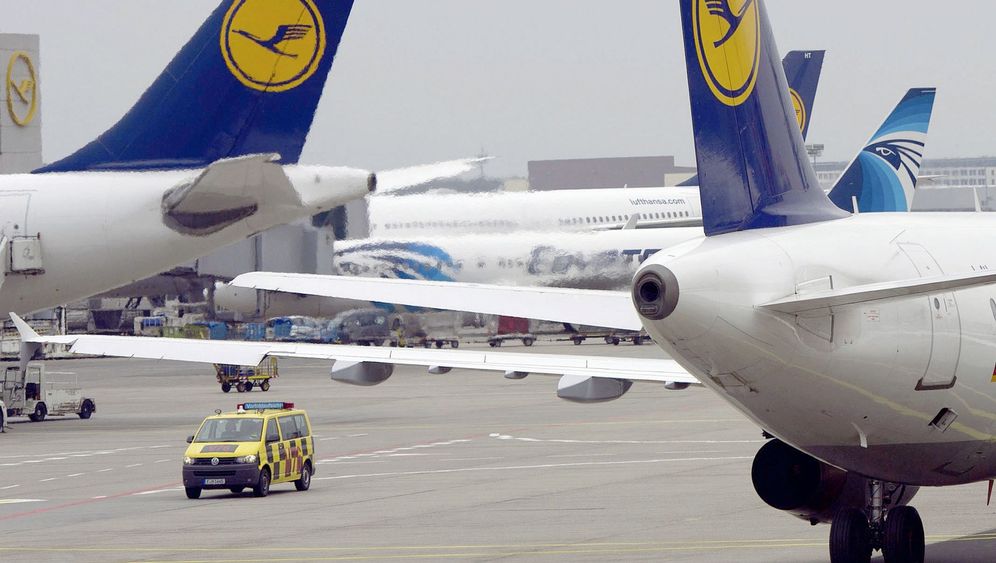 When the news of the defeat arrives, the waiter at the "Siedlerhaus" is just serving vanilla ice cream with whipped cream on top. The pub in Kelsterbach near Frankfurt serves as the strike headquarters for tarmac workers at Frankfurt Airport. It is Wednesday of last week, and a labor court about 13 kilometers (8 miles) away has just ruled that the union of air traffic control workers (GdF) must end its strike. Members have to go back to work -- immediately.

At least for now, the ruling puts an end to a David and Goliath labor dispute. The judge came down on the side of the giant, Fraport, the company that operates the airport. The small air traffic controllers' union took a gamble and lost. The expected chaos at the international hub largely failed to materialize, a court put an end to the strike and the public was irritated.

Nevertheless, the conflict marks a turning point, because it raises fundamental questions about the collective bargaining system and the rights of labor unions. It also puts the political world under pressure.

The coalition government of the center-right Christian Democratic Union (CDU) and the pro-business Free Democratic Party (FDP) could face an internal dispute over whether to legally limit the rights of niche unions. In 2010, the Federal Labor Court strengthened the rights of small unions and put an end to the principle of Tarifeinheit, which had existed for 60 years. The basic tenet of Tarifeinheit is that there can be only one collective bargaining agreement in a given company.

Following the court's decision, members of the German Confederation of Trade Unions (DGB) and the Confederation of German Employers' Associations (BDA) launched a joint initiative calling for a law to reestablish Tarifeinheit. The unions are worried that professional groups that stand to benefit the most from strikes could abandon the principle of solidarity. Employers, for their part, fear that companies will face permanent turmoil in the future, because individual collective bargaining agreements will constantly be expiring.

Draft Law in the Works

In 2010, Chancellor Angela Merkel said that she was "personally convinced that there is a need for regulation" and suggested that a rapid solution was in the works. But nothing happened, because of resistance to such legislation among some members of Merkel's CDU and, even more so, within the junior coalition partner, the FDP. Last week the heads of the coalition parties' parliamentary groups gauged the mood within their own ranks. FDP floor leader Rainer Brüderle proved willing to discuss the issue, but he also noted that FDP hardliners would not be as accommodating.

Ramsauer is troubled by the fact that companies lack legal certainty, because courts are increasingly ruling over the who, when and how of strikes and negotiations. "Having recourse to the courts is part of living in a constitutional state, but it shouldn't be the norm," says Ramsauer.

"I believe that a statutory solution is necessary, and I have reopened talks within the government, as well as with the CDU/CSU and FDP parliamentary groups," says Labor Minister Ursula von der Leyen.

A benchmark paper for a Tarifeinheit law was produced in 2011 and approved by the Interior Ministry and the FDP-controlled Economy Ministry. The labor minister's proposal essentially provides that when there are competing collective bargaining agreements, the one applicable to the union with the largest number of organized workers in a company should apply. It also states that the duty to abstain from industrial action should apply to everyone during the term of the agreement. So far FDP Justice Minister Sabine Leutheusser-Schnarrenberger has rejected the proposals, citing constitutional concerns.

Labor market and economic experts in the FDP parliamentary group plan to meet with experts and union leaders in March to discuss the issue, in addition to reviewing their own position. Von der Leyen is convinced that a law will be passed. "It's my impression that, unlike in the previous year, the main issue is no longer whether we need a statutory solution, but how we can cleverly outline the issue."

It is still unclear what an agreement could look like within the coalition. More than half a dozen alternatives are currently being discussed. Horst Seehofer, the CSU governor of Bavaria, wants to preserve Tarifeinheit: "We should push back splinter groups. The only time an exception should be made is when an abuse of the strike option can be ruled out."

The pressure is on to resolve the issue, but not just because of the Fraport case. Niche unions are gaining influence in other companies, as well. Last year, the GdF openly threatened to stage an air traffic controllers' strike unless its salary demands were met. To avert the possibility of an airport shutdown lasting for days, Deutsche Flugsicherung, the company in charge of air traffic control for Germany, eventually gave in.

Politicians aren't the only ones willing to be flexible on the issue. The unions are also showing a willingness to be self-critical. "In the future, we will certainly pay more attention the various interests of professional groups," says Frank Bsirske, the head of the public sector union Verdi. His union can hardly expect members that have gone to the niche unions to come back, says Bsirske, calling it a losing battle. But, he adds, it can prevent others from leaving and forming new guerilla unions.

Bsirske intends to poll members more frequently in the future and allow greater differentiation within collective bargaining agreements. In the current government employee wage dispute, he is demonstrating what the future might look like. Bsirske is demanding that all airport employees who work in safety and security areas receive a monthly supplement of €90 on top of their wage increase. He also intends to negotiate better supplementary terms for employees of savings banks following the conclusion of their collective bargaining agreement.

Bsirske wants to take a tougher stance when it comes to Fraport, too. The airport operator could grant the employees who work on the tarmac more than the 6.5-percent wage increase that Verdi is now demanding for federal and local public-sector employees. Then the giant union could begin staging strikes, even at Frankfurt Airport. That's because the airport is considered part of the public sector, and as of last week, Verdi is no longer required to abstain from industrial action.

Meanwhile, neither unions nor companies are impeding the gradual increase in the power of the separatist organizations. This became evident in the year before last, during the collective bargaining conflict involving privately owned railroads. The Union of German Locomotive Engineers (GDL) wanted to implement a nationwide general collective bargaining agreement that offered the same terms as the state-owned railroad, Deutsche Bahn. After months of strikes that proved costly to the companies, the dispute was resolved in arbitration. Although the GDL was only able to implement company-based wage agreements and had to accept lower pay for its members in some cases, it did not emerge from the labor dispute as a loser.

"The union has achieved more than is visible at first glance," says Ulrike Riedel of Benex, one of the main negotiators on the employer side. "There are now GDL collective bargaining agreements in more companies, and besides, almost all agreements expire at the same time. This strengthens the power of the strike in the future."

Hardly any other company has had more trouble with splintering among its employees than Lufthansa. In addition to Verdi, the airline's employees are organized within the Cockpit pilots' association and the UFO cabin personnel union, splinter groups like the Vereinigung Boden ground workers' union and the newly established Technik Gewerkschaft Luftfahrt (Aviation Technology Union). All are at least determined to have a say or are pushing for their own wage agreements. Lufthansa personnel chief Stefan Lauer warns that the development has the potential for becoming truly "explosive."