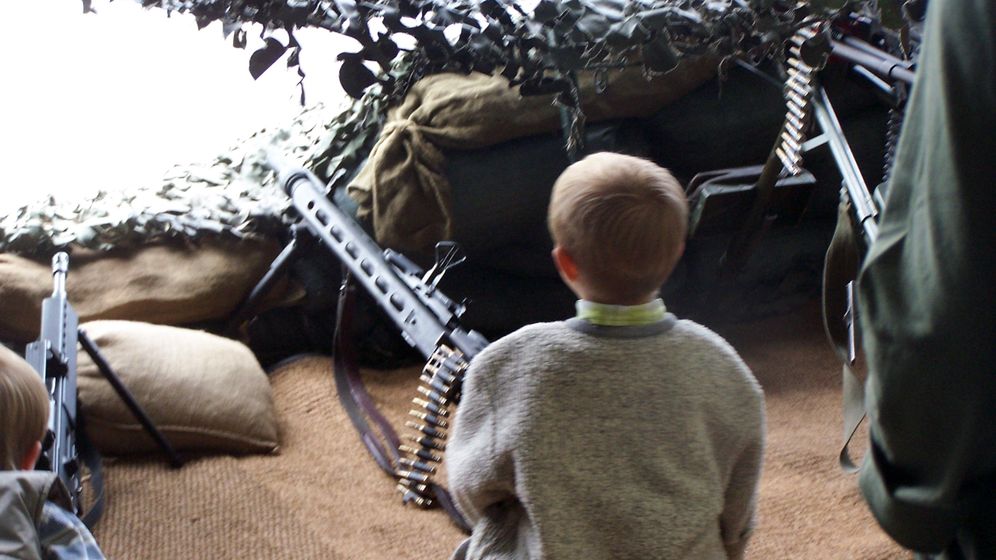 Two small boys lie under a camouflage net among sandbags -- one peers through the sights of an assault rifle, the other kneels behind a machine gun. This scene allegedly took place at a July 1, 2009 open house at the Karfreit barracks in the Bavarian town of Brannenburg. A left-wing extremist group called Rabatz published the photos of the event online on Tuesday.

"The photos are proof that it's not unusual for children to handle weapons during open houses with the Bundeswehr," 28-year-old student and activist Michael Kurz, who snapped the images at the facility, told SPIEGEL ONLINE in reference to the German military. The authenticity of the photos has not yet been determined, but Kurz alleges that soldiers stationed at the barracks, closed last year following military reforms, allowed a number of children access to weapons that day.

The latest photos emerge at an inopportune moment. On Sunday news broke that young people played with weapons at a public military event late last month in Bad Reichenhall, also in Bavaria. Mountain rangers at the General Konrad barracks there allegedly helped boys and girls take aim at a model city with anti-tank weapons -- photos were also provided by the Rabatz group.

'At the Limits of Good Taste'

But even more explosive than the violation of military rules banning those under 18 from access to weapons on base was the fact that the model town had been named "Little Mitrovica" -- in reference to the city of Mitrovica in Kosovo. During World War II, German soldiers, including a unit from Bad Reichenhall, were stationed there. And in 1999 it was also the site of heavy fighting during the Kosovo War. "Choosing the name of that place is certainly tasteless," a Bundeswehr spokesperson said Sunday.

Prosecutors in the Bavarian town Traunstein have since launched an investigation into the Bad Reichenhall incident. According to the Munich daily Münchner Merkur members of the Bundeswehr are suspected of incitement to hatred and violating weapons control laws. Bundeswehr officials also announced their own investigation into whether military regulations may have been breached, said press spokesman Lieutenant Colonel Siegfried Houben. Military rules clearly state that "youths and children under 18 are forbidden access to weapons" during public events, he said.

Meanwhile opposition politicians criticized the allegations harshly. "The picture this paints of the Bundeswehr is a catastrophe," said Green party member of the parliamentary defence committee Omid Nouripour. Defense policy spokesman for the center-left Social Democrats, Rainer Arnold, said that such war games were "in no way acceptable." Left Party parliamentarian Ulla Jelpke said: "Not only did the Bundeswehr cross the limits of good taste with its youth recruitment efforts, it also stomped on children's rights."

In June 2010, residents of Neustadt in the state of Rhineland-Palatinate were similarly outraged when members of the US military let children play with weapons at a local festival. High-caliber handguns, machine guns, and grenade launchers, in addition to what one witness said were "death machines and a soldier dummy with a shot-off leg" were all made available to local children, daily Die Rheinpfalz reported at the time. US Air Force officials from the nearby Ramstein Air Base told the paper that their military police often stage such exhibitions, where only adults are allowed to handle a selection of just a few different weapons. But under the supervision of their parents children under 18 can also take a turn, they told the paper.

With reporting by Björn Hengst and Conny Neumann