Georg Müller*, a former neo-Nazi from Berlin, says the German far-right scene has long contained potential terrorists with the same militant goals as the so-called Zwickau cell, the trio discovered by chance last November after murdering 10 people since 2000.

"These networks and structures have existed since the 1980s and 1990s. There are theories and strategies going around in the scene for how to go into terrorism," Müller, a former senior member of militant far-right groups, told foreign journalists in Berlin.

"People I knew were talking about using pipe bombs and other methods," said Müller, a well-spoken, slender man who quit the scene in 2006 and who doesn't want to be photographed. "They were saying that if the Day X, when society and the state collapse and the Fourth Reich can be built on the rubble, doesn't arrive quickly enough, we will have to find other ways and means to make it happen, and that terrorism is an option."

"They're not stupid," he added.

Müller, who is bald, said he didn't know about the Zwickau cell, which called itself the National Socialist Underground and shot dead nine mostly Turkish shopkeepers and one policewoman as well as injuring 22 people with a remote-detonated nail bomb in a Turkish district of Cologne in 2004.

But he said he wasn't surprised by its existence or its capabilities.

"These networks and these methods and ideas have been around for a long time. I didn't find it surprising. What did surprise me was how the security authorities failed to find them and failed to prevent the killings," he said.

The discovery of the Zwickau cell was a major embarrassment for German security authorities. It exposed them to criticism that they have been blind to the threat of far-right violence and excessively preoccupied with Islamist militants.

'They're Cracking Up With Laughter'

There have been calls for a fundamental reform of the domestic intelligence service, the Federal Office for the Protection of the Constitution. A parliamentary committee of inquiry has been set up to investigate what went wrong, and the Interior Ministry has said it will set up a register of known neo-Nazis, similar to its register of radical Islamists.

According to Müller, though, hardcore neo-Nazis aren't especially worried about the debate. "We know that many people who need to be fought are cracking up with laughter at the moment," he said.

Germany will hold a ceremony and observe a minute's silence on Thursday in memory of the victims of the NSU -- eight men of Turkish origin and one Greek man, all murdered in cold blood in a six-year killing spree in various German cities, simply because they were immigrants. A policewoman was also killed and her partner seriously injured after he was shot in the head. Chancellor Angela Merkel will hold the keynote speech in place of Christian Wulff, who resigned as president last Friday in a scandal over favors from private entrepreneurs.

The murders, initially called the "doner killings" in just one indication of how insensitively the investigation was handled, baffled the police, who long suspected that the victims might be involved in gambling or protection rackets. The possibility of a far-right motive was never investigated until a DVD claiming responsibilty was discovered by chance in an apartment used by right-wing extremists.

Call for Broader Debate on Racism

Thursday's ceremony is being overshadowed by warnings that three months after the shock discovery of the existence of the NSU, the momentum for a broad public fight against the far right is starting to slacken.

"I would have preferred a deeper debate about the failings of the authorities," said Bernd Wagner, a leading analyst of the far-right and founder of EXIT-Deutschland, an organization set up in 2000 to help neo-Nazis quit the scene.

"The political pressure is easing off again," he said. "We're not addressing the basic issue of how to use our domestic intelligence services in the future."

The investigation so far has blamed poor coordination between police and the regionally fragmented intelligence authorities for the failure to apprehend the three members of the NSU, who had been on the run from the police since 1998 but had managed to live surprisingly normal lives with the help of accomplices.

Two of the members, Uwe Böhnhardt and Uwe Mundlos, committed suicide in November following a botched bank robbery. The third suspected member, Beate Zschäpe, is in custody. Police searching the apartment they had used in the eastern city of Zwickau found DVDs in which they credibly claimed responsibility for the killings.

Wagner said he hoped Merkel would talk about the problem of racism in German society in her speech on Thursday. "I expect her to address the racial myth in Germany, and to explain that we're not an ethnically homogeneous society, that we're a community of different ethnic groups."

Estimates of the number of people killed by far-right violence since unification in 1990 vary widely. The government says there have been around 50 deaths, while the Amadeu Antonio Stiftung, an anti-racism group, puts the figure at over 180. There was an upsurge in racist violence in eastern Germany after unification in 1990 when immigrants became scapegoats for the economic upheaval caused by the rapid collapse of the communist economy.

Wagner said the nature of far-right violence was changing. "At first it was spontaneous, uncontrolled, racist youth violence, but in the last 10 to 15 years it has become more focused, better organized and more strategic."

'Campfire Romanticism of the Hitler Youth'

Müller's story gives an interesting insight into the far right. He used the help of EXIT to quit the far right in 2006 after spending 15 years as a neo-Nazi, including six years in organized militant groups in Berlin and the surrounding state of Brandenburg.

He co-founded the Berliner Alternative Süd Ost group that was banned in 2005 for trying to recruit youths to the cause, and was a member of the Märkischer Heimatschutz, a regional "Homeland Protection Society" that dissolved itself in 2007 to pre-empt a ban.

"I never knew my father and spent a lot of time with my grandfather when I was a child," said Müller. "He had been in the Hitler Youth and was a soldier in the Wehrmacht in the war. He showed me his medals and told me about the heroic things he did. He was a hero to me."

'"When I was 12 or 13, I made contact with the skinhead subculture, via music at first. Then, when I became a football fan, I got to know the organized neo-Nazi scene. I joined it relatively late, when I was 20 or 21. I was a member out of conviction. I found solutions to my personal problems there but also to the political problems worldwide. I was very racist and xenophobic."

'We Only Ate German Dishes'

"There was a sense of togetherness, of belonging to a group," said Müller. "It reminded me of what my grandfather said about the campfire romanticism of the Hitler Youth."

"I didn't have a normal job. It took up all my time. I did things like register demonstrations, serve as a warden at marches or hire coaches. I relied on welfare benefits, money from my family and money I made from selling music."

"We were encouraged to ditch all Anglicisms and use German words for everything. For example, we had fines for saying words like Internet, which we referred to as 'Weltnetz.' And we only ate German dishes and shunned fast food. That was partly also intended as a way to stay fit and healthy."

Müller said he didn't take part in combat exercises but that they did take place in remote rural areas. He attended training exercises on how to respond to violence from police or counter-protestors at demonstrations.

"I decided to leave in 2005 because I was very dissatisfied with the way my life was going," he recalled. "I was a leading member of the neo-Nazi scene and had a lot of friends. But I wasn't able to lead a normal life, have a job, I was at the bottom of society. I realized that the ideology I had adopted was an obstacle to my freedom."

'An Incredible Feeling of Freedom'

Müller decided to contact EXIT for advice. "It took me a long time to deal with what I'd done," he said. "I was a perpetrator, I had taken part in acts of violence. It's a process I haven't completed yet, although I have democratic values now and have ditched my racism."

"I didn't want to go to the police. They couldn't have protected me and would have demanded that I snitch on my former friends. But if I'd done that, I would have made myself more vulnerable. When I left, I was protected by what I knew. And when no arrests were made after I quit, they knew I wasn't talking. So they left me alone."

"When I'd got out, it was an incredible feeling of freedom, like bursting out of chains," he said. Müller did a high school diploma in 2006 and got a job with EXIT where he helps other neo-Nazis to leave.

EXIT provides help with relocation and gives security advice, although it doesn't have the remit or the resources to protect people itself. Wagner said his group has enabled 443 people, most of them militant Nazis, to quit since 2000. A quarter of them are women.

The number of right-wing extremists deemed violent was estimated at 9,500 in 2010, according to the most recent figures available from the Federal Office for the Protection of the Constitution.

*Name has been changed to protect his identity. 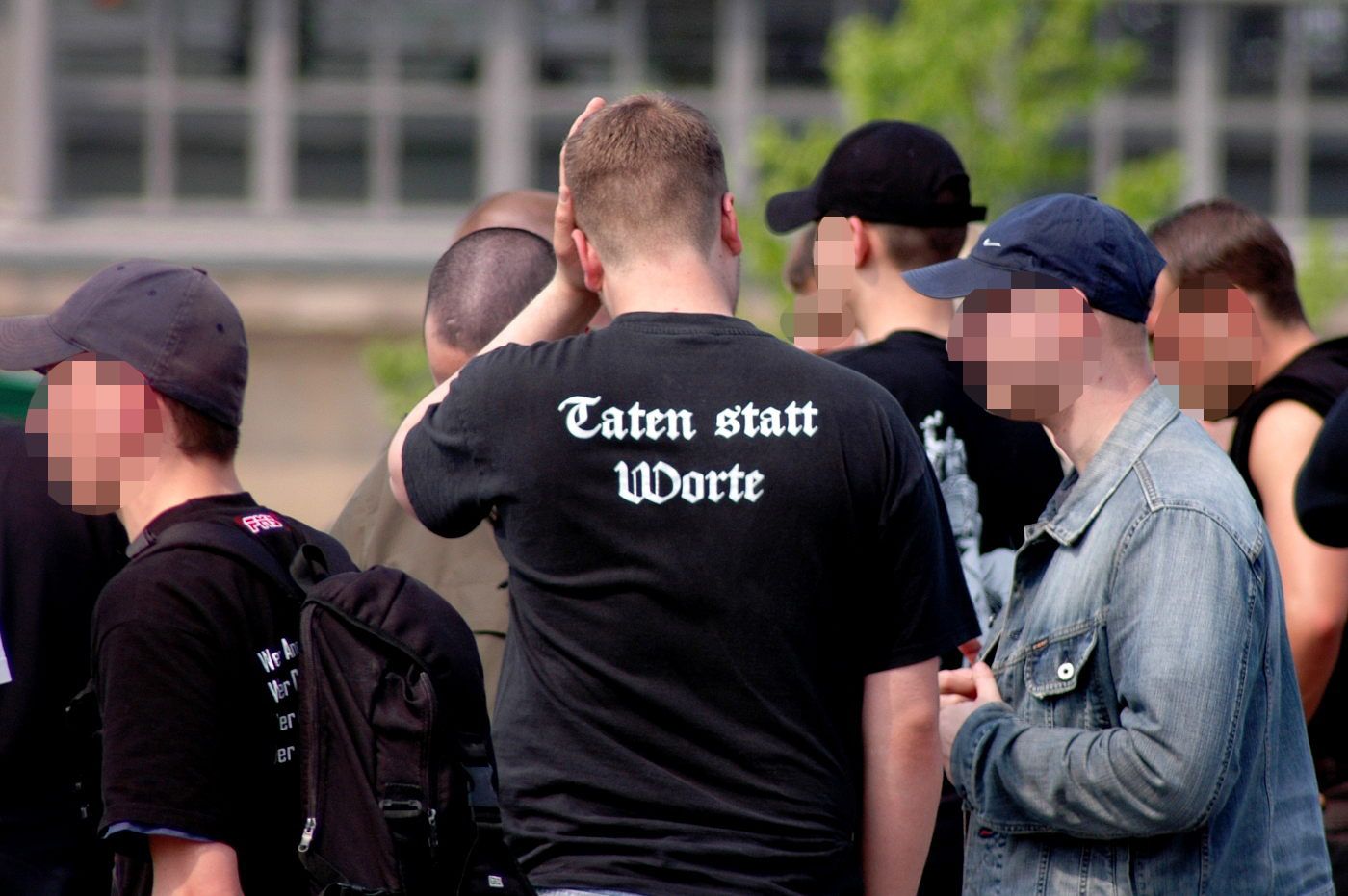 Neo-Nazis marching in Leipzig: the T-shirt reads "Deeds Not Words"