Editor's note: In this interview, German historian Klaus Schroeder offers his analysis of SPIEGEL's Aug. 23, 1961 coverage of the construction of the Berlin Wall. Click here to read the original article from the SPIEGEL archive in English.

SPIEGEL ONLINE: What is your perspective on this article, almost 50 years later?

Schroeder : It makes it clear that the Western Allies, and mainly the United States, signaled that they would do nothing about the construction of the Berlin Wall. The people of Berlin were naturally outraged that the West did nothing, and many felt betrayed.

SPIEGEL ONLINE: Why didn't the Allies do anything to stop the construction of the Wall?

Schroeder : There was the illusion that the West could intervene, but that was militarily impossible without provoking a war. Today we know from all of the threats documented between US President John F. Kennedy and (Soviet Premier) Nikita Khrushchev that both sides were bluffing. They made threats, but in the end, the US was willing to allow the status quo to be set in concrete.

SPIEGEL ONLINE: Is it true that the US knew of the plans for the Wall ahead of time?

Schroeder : There is some dispute over when the green light was given in the East, but it may have come before the Vienna Summit (where Khrushchev met with President Kennedy on June 4, 1961). Between early and mid-July of that year, the decision was finalized to close off the sector borders. At that point, Khrushchev was certain the Americans would not intervene.

SPIEGEL ONLINE: Could the Allies have done something to stop it?

Schroeder : No. They could have intervened militarily and broken through the barriers, and we can only speculate on whether the other side would have fired shots. Crossing the barriers with US tanks could have meant war -- but we can never know for sure.

SPIEGEL ONLINE: Was it in their interest to allow the Wall to be built?

Schroeder : In Berlin there was the status quo, and leaders everywhere but in Germany agreed the country should be divided to ensure that this normalcy remained intact. They wanted to neutralize the instability in East Germany. The West knew that as the number of people fleeing increased, East Germany would become more unstable, and they wanted to prevent this.

SPIEGEL ONLINE: Were the Western leaders just tired of war?

Schroeder : To say that would be wrong. They wanted calm in Europe and in Berlin. They didn't want to start a war over Berlin, maybe about other things, but not Berlin.

SPIEGEL ONLINE: Did West Berliners hold on to their anger at the Allies?

Schroeder : Whenever Western soldiers would stand by and watch someone who had tried to flee bleed to death, people would be furious that the Allies did nothing. But they had to hold back from shooting -- it was a very delicate issue. But that anger was also directed at the West Berlin police, who could also only watch as people were killed along the border.

SPIEGEL ONLINE: Did people also feel they needed the Allies to keep them safe?

Schroeder : They knew that they couldn't survive without the US. They always felt they were under threat. And with good reason, as we now know from the archives.

SPIEGEL ONLINE: How long did it take for the Berliners to accept the Wall as part of their daily life?

Schroeder : Every time someone was killed, the outrage would resurface, but then it would go away again. And by the 1980s, the number of deaths were decreasing because the Wall had become more impenetrable. As that happened, West Berliners got used to the Wall. It was there, and there were complaints about how the border crossings delayed travel, but the Wall itself was no longer really noticed.

SPIEGEL ONLINE: This particular piece was published buried on page 18 some 10 days after the Berlin Wall construction began. SPIEGEL did not run a cover story on the issue at all that year. Why do you think that might be?

Schroeder : I've been asking myself the same question. I looked through the archives and there is precious little on the events of Aug. 13. It's stunning. One sees that what moved the people of Berlin didn't have the same affect elsewhere.

SPIEGEL ONLINE: In retrospect, the tone of the article is very negative.

Schroeder : It's cynical. The fact that they are quoting one of the most notorious East German propagandists Karl-Eduard von Schnitzler -- he was known as the "Sudel-Ede," or "Sully Eddy" -- is derisive. And many West Berliners felt that way. They felt abandoned and powerless. 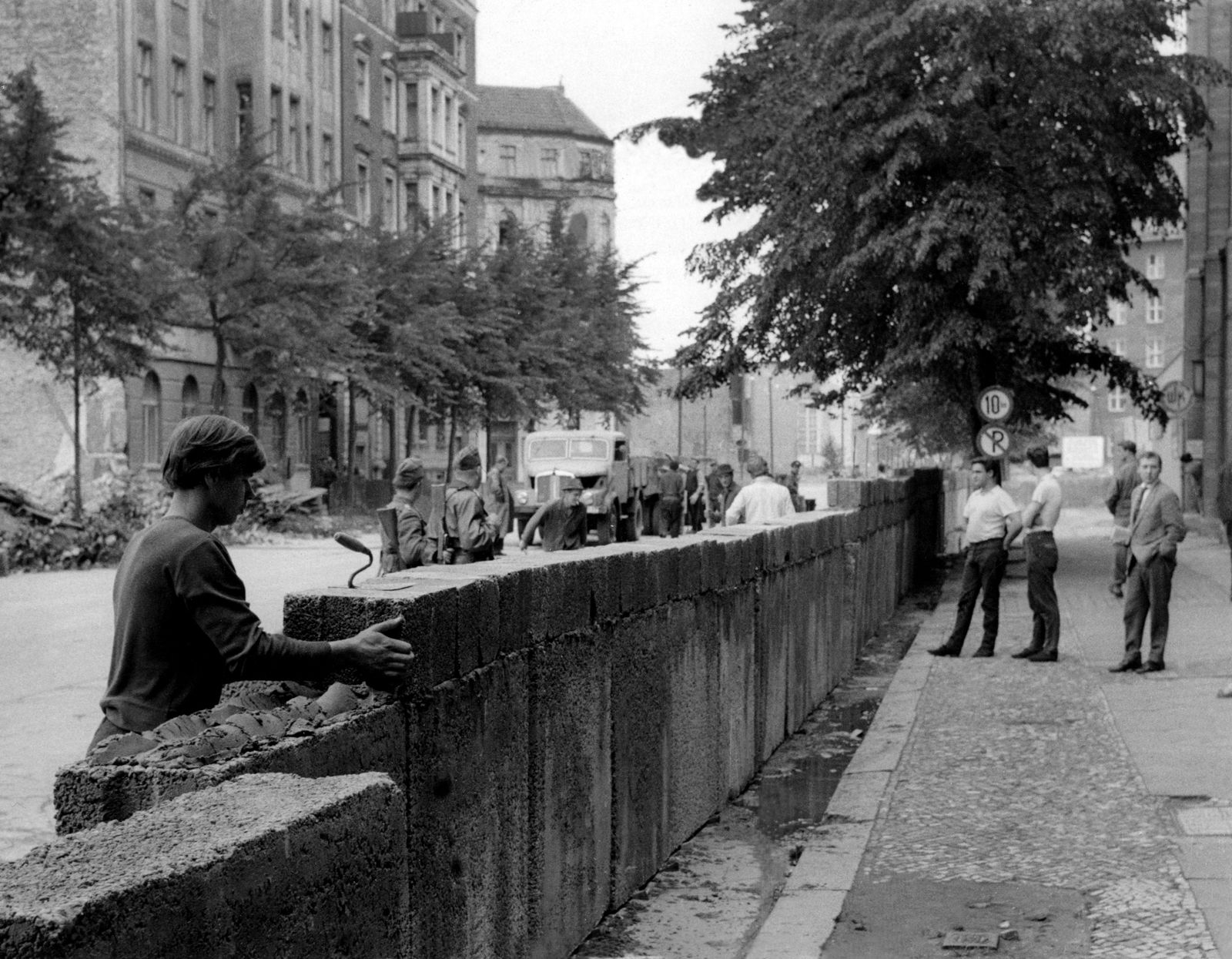 Workers build the Wall under the watchful eye of East German police in 1961.