Pastors Christian Fuehrer and Christoph Wonneberger had never seen so many people in the Nicolaikirche, an 800-year-old church in downtown Leipzig. It was Oct. 9, 1989, and the two young pastors knew they were on the verge of something huge. "There were 8,000 people inside -- more couldn't fit," Fuehrer said. "When we came out of the church there were so many people expressing themselves and demanding their freedom."

This was no spontaneous flash mob. By the summer of 1989, East German dissidents had been meeting at Leipzig's 800-year-old Nicolaikirche for almost a decade to pray and talk politics. At times there were fewer than a dozen people in the church, but all through the 1980s the meetings happened every Monday without fail. Eventually, they attracted people eager to discuss a wide range of causes, from the environment to the right to travel freely. 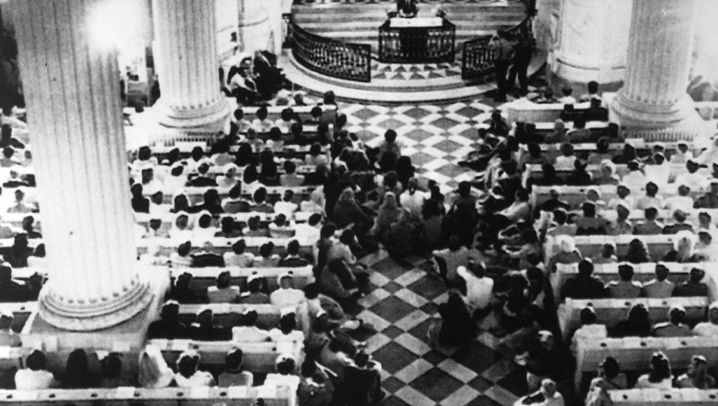 By the fall of 1989, the prayer meetings had evolved into a nationwide movement centered in Leipzig. And on Oct. 9, Leipzig hosted the largest protest demonstration in East German history: Between 70,000 and 100,000 peaceful demonstrators braved warnings from the feared Stasi, or secret police, and thousands of armed riot cops to march around the city center. In the end, the police did nothing, setting the stage for a peaceful revolution that swept across East Germany.

On Friday, Leipzig is celebrating its pivotal role in the fall of communism with concerts, exhibitions, light shows and an anniversary march tracing the steps of the Oct. 9 demonstration that rocked East Germany and helped pave the way for the collapse of the Berlin Wall more than a month later.

'People Were Willing to Take Risks Outside Berlin'

The events in Leipzig tend to be overshadowed by the sudden collapse of the Berlin Wall, which was photographed and filmed by hundreds of journalists and broadcast around the world. Leipzig was out of the way. There are just a few grainy tapes of the huge Monday Demonstrations, and outside of Germany they have mostly been forgotten.

But at the time, it helped that Leipzig was out of the spotlight. Although activists in Berlin had better contacts with Western journalists, the capital was under constant scrutiny. "Berlin was the showcase. In Berlin, everyone was minding their Ps and Qs for fear they'd get sent back to Karl Marx Stadt," Peter Claussen, a US diplomat who worked in the American embassy in Berlin in the late 1980s, told SPIEGEL ONLINE. "People were more willing to take risks outside of Berlin."

By the late 1980s, fueled in part by East Germans frustrated that they couldn't leave the country, the Monday prayer meetings in Leipzig were attracting hundreds, and then thousands, of people -- the largest regular meetings in Germany. Average citizens began to take notice. So did the Stasi: Dozens were jailed for weeks for their involvement.

Fuehrer and Wonneberger, long the targets of intense secret police surveillance and pressure, were arrested in late September and told to call off the Monday meetings -- or else.

'It Wasn't at all Clear it Would Be Peaceful'

It wasn't an empty threat. In the summer of 1989, East German politicians praised the Chinese decision to use violence against democracy activists camping in Beijing's Tiananmen Square. In September and early October, East German police had cracked down forcefully on protesters in Dresden, Berlin and Plauen. Protesters marching in Leipzig on Oct. 2 were beaten by police. "People had seen pictures from Beijing," Jens Schoene, a historian and author of "The Peaceful Revolution: Berlin 1989/90 -- The Path to German Unity," says. "It wasn't at all clear it would be peaceful."

On Monday, Oct. 9, Fuehrer, Wonneberger and the others at the Nicolaikirche decided to go ahead with the scheduled protests. All of East Germany, it seemed, was holding its breath. "We were so worried they would come in and shoot everybody," said Dorothee Kern, then a graduate student in the nearby city of Halle. "We had goosebumps the whole day and the day before."

Dissidents prepared for the worst. Couples with kids made sure one parent stayed home, in case there was a police crackdown. Rumors flew around the city: Hospitals had been stocked with extra blood and beds; stadiums were readied to hold masses of arrested demonstrators. On his way home from work at the opera house in the middle of town that day, Leipziger Hans Georg Kluge remembers seeing the city filling with soldiers and police. "Everyone had to reckon with the state suppressing any demonstration," he says. "Violently, if necessary."

'We Are the People'

At 5 p.m., more than 8,000 people crowded into the Nicolaikirche. Four other Leipzig churches opened to accommodate thousands more protesters. After an hour-long service, Fuehrer led worshipers outside. The nearby Augustusplatz was jammed with demonstrators clutching lit candles. Prominent Leipzigers -- including Kurt Masur, the conductor of Leipzig's Gewandhaus Orchester -- read an appeal to protesters and police alike, urging them to keep the peace.

Slowly, the crowd began walking around Leipzig's ring road, past the Stasi headquarters and towards the train station. There were so many people on the road traffic and trams were blocked. Drivers left their cars in the middle of the streets and joined the march. Behind the scenes, police and Stasi officials were frantically trying to communicate with higher-ups in Berlin -- to no avail.

As the crowd made its way towards the city's century-old train station -- accompanied by thousands of helmeted riot police -- tension grew. But at the decisive moment, the police stood aside and let the protesters march by. "They didn't attack," Fuehrer says. "They had nothing to attack for." Organizers made sure the crowds gave the police no excuses. They carried nothing but candles and banners reading "We are the people." The Stasi planted plainclothes officers in the crowd to cause trouble, but they were all quickly surrounded and neutralized by protesters chanting "no violence."

Historian Erhard Neubert later called that night East Germany's "October Revolution." At least 70,000 people - perhaps as many as 100,000 -- took to the streets, making Oct. 9, 1989 the largest protest East Germany had ever seen. "People were on the streets and had the courage," Schoene says.

The time for violence was over. Secretly recorded footage of the march was broadcast on West German television, inspiring Monday Demonstrations all over East Germany in the weeks to come. The demonstrations in Leipzig doubled in size every week, attracting protesters from all over East Germany. By Oct. 23, 1989, a little less than two weeks before the Berlin Wall came down, more than 300,000 people filled Leipzig's city center, carrying candles and banners. Leipzig was nicknamed "Heldenstadt," or "hero city."

No one knew it at the time, but the peaceful Leipzig demonstrations exerted irresistible pressure to reform on the East German regime -- and led directly to the fall of the wall five weeks later. "It was a self-liberation. We did it without the dollar or the DAX, without the US or Soviet armies," Fuehrer says. "It was the people here who did it."