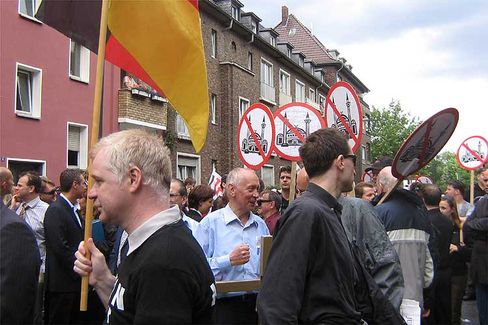 The Pro Cologne citizens' initiative wants to prevent the construction of Germany's largest mosque in Cologne. The group, which held a rally in Cologne last Saturday, is drawing support from right-wing activists across Europe.

It's a sunny Saturday in the German city of Cologne and the Ehrenfeld district is witnessing a showdown. The Social Democratic member of parliament Lale Akgün, Cologne's mayor Elfi Scho-Antwerpes and Mehmet Yildirim, the general secretary of the Turkish-Islamic Union for Religious Affairs (DITIB), are standing next to a Shell gas station. They are holding red roses and flyers featuring Cologne's famous cathedral, a synagogue and a drawing of a mosque.

They have assembled on the other side of Venloer Street, not far from the premises where DITIB currently operates a mosque on the site of a former factory and where a new, larger mosque with a dome and minarets is to be built soon. That's what Cologne's politicians have decided, in any case -- all political parties voted in favor of the project. Only Pro Cologne stands opposed.

A man in a black suit flits past Scho-Antwerpes. "That's someone from Pro Cologne," the mayor mumbles. "Unfortunately he always says hello to me. It's terrible."

At this rally, Pro Cologne has recruited help from the far-right fringe of the political spectrum in Austria and Belgium: the leader of Austria's populist right-wing Freedom Party (FPÖ) Heinz-Christian Strache, and Bart Debie from the extreme right Vlaams Belang (Flemish Interest) party in Antwerp. Standing behind the police barriers are Pro Cologne members with very short hair, salon-tanned faces and white armbands designating them as security personnel provided by the organizers of the rally. Several dozen citizens wait for their prominent visitors, armed with German flags and wooden crosses. A few adolescents with Iron Cross necklaces and Pitbull sweatshirts have joined the throng. Asked why they are here, they decline to reply.

Others, however, are more than happy to air their views. Pro Cologne's Bernd Schöppe sees the construction of the mosque as "one more step towards the Islamization of Europe." Fellow demonstrator Thomas Bendt also believes the mosque is intended as a symbol of Muslim fundamentalist power. The mosque won't act openly, he believes. "If men and women are going to pray separately in the new mosque, that's not the kind of freedom we want," he says.

A woman who prefers to remain anonymous even believes that once the Muslim community has grown sufficiently large, it will attack Cologne's cathedral. She wants to feel at home somewhere, she says, without feeling she is in a foreign city.

'We Want the Cathedral Here, not Minarets'

Ehrenfeld residents watch the activities on the street from their balconies above the demonstration area, which has been closed off by the police. The residents have suspended signs that read "Red Card for Racists." Left-wing counter-demonstrators from an anti-fascist group bellow "Nazis out!"

Suddenly the anti-mosque demonstrators grow restless. Smoke rises in the air shortly before Strache, the Freedom Party leader, reaches the rally and walks with swift steps through the crowd of Pro-Cologne sympathizers. The police suspects a smoke bomb at first, but cannot clarify where the smoke is coming from.

Round signs showing a red line across a stylized mosque are unpacked, and loud classical music is heard from within the Pro Cologne ranks. The protesters begin marching. Those at the front of the silent march carry a large banner featuring a quote from German writer Ralph Giordano: "There is no fundamental right to the construction of a large mosque." The Jewish writer and Holocaust survivor Giordano has sharply criticized the construction of the mosque -- and now the right-wingers have co-opted him for their cause. Giordano, however, is vigorously resisting Pro Cologne's efforts to enlist him for their cause. He has dubbed the right-wing citizens' initiative the "local variety of Nazism." 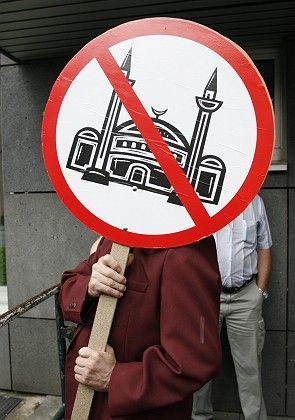 "We want the cathedral here, not minarets."

Roughly 1,000 policemen are out in force, and the situation remains mostly calm. Later, it transpires that other right-wing demonstrators organized their own "spontaneous" demonstration. The demonstration was broken up and about 100 people were taken into custody, according to a police spokesman.

In contrast, several hundred citizens followed the call from trade unions, political parties and associations to rally in favor of the construction of the mosque. "Freedom of religion means that Muslims are allowed to build a representative mosque in Cologne," says Wolfgang Uellenberg van Dawen, the leader of the Cologne branch of the Confederation of German Trade Unions (DGB).

But a different tune can be heard in front of Ehrenfeld's local town hall, where Strache is giving a speech. "We want the cathedral here, not minarets," he shouts, adding that "the left-wing counter-demonstrators live off our welfare contributions." Björn Clemens, a Pro Cologne sympathizer from Düsseldorf, also makes his views clear. "Whoever believes himself to be in the grip of Islam should go back to his home country," he shouts. "Pack your bags and go home."

The domed structure, which is to have two 55-meter (180-foot) minarets, will be Germany's largest mosque, with room for about 2,000 believers to pray in. Ever since Giordano has made his views on the mosque public, the issue has been attracting attention in Germany's national media. Most recently, Cologne-based writer Dieter Wellershof weighed up the arguments on both sides in an article entitled "What Does The Mosque Stand For?" published in the conservative daily Frankfurter Allgemeine Zeitung.

Many citizens who feel skeptical about the mosque, but who don't want to have anything to do with Pro Cologne, seem to be asking themselves the same question. The feeling of fear and uncertainty has increased among the local population, says one Ehrenfeld resident, who is herself in favor of the mosque. But Pro Cologne is inciting people to hatred, she adds. "And yet people in Cologne aren't like that. They want to live in a multi-cultural city."

"I feel afraid," confesses one elderly woman with carefully curled hair. "I'm not sure exactly what of -- probably the right-wingers most of all." She says she is not opposed to the Muslims receiving a new mosque, but adds that, as a local resident, she is concerned about the "traffic problems" that would result.

"I'm just afraid of fundamentalist Muslims gaining more and more ground," says one female shop assistant. But it's hardly possible to voice this fear because of the risk of immediately being labeled right-wing, she says. "I think Pro Cologne is horrible," she adds. Only the two extremes, "the young, far-left demonstrators and the right-wingers from Pro Cologne," are attracting attention, and that's sad, she says. "It's like an absurd carnival," she says.