He may be minister of foreign affairs of the largest economy in the European Union, but that so far hasn't protected Guido Westerwelle from a bit of mockery from his fellow Germans.

Even before he got the job, Westerwelle, who is the leader of the Free Democrats, Chancellor Angela Merkel's junior coalition partner, managed to generate major headlines with a minor gaffe. At his first, post-election press conference, Westerwelle refused to answer a question posed by a BBC journalist in English remarking that when in Germany, one should speak German. To cap it off, he glibly invited the journalist to come and have a "fabulous tea" with him outside of any press conference, at which they could happily speak English together.

The linguistic kerfuffle launched a minor political scandal and dozens of magazine and newspaper columns around Europe. Befitting the German penchant for debate, it also spurred hundreds of online arguments about Westerwelle's reaction.

But it also raised the question as to whether Westerwelle could speak English at all. And it provided yet another opportunity to lampoon a politician who has become accustomed to being portrayed as the Dan Quayle of German politics.

Should The German Foreign Minister Be Good At English?

Westerwelle, 48, got his start as an object of irony with his fascinatingly unfunny practice of "fun politics"during the 2002 general election campaign. Westerwelle toured the country in a big yellow bus called the Guido-mobile, played beach volleyball for the cameras, appeared on the German version of the Big Brother reality TV show and painted the number 18 on the soles of his shoes to indicate the percentage of votes he wanted to achieve.

Now, his English ability has become the punchline. Despite footage of earlier speeches on the Web showing that Germany's new foreign minister can speak English ably, cartoonists have been hard at work caricaturing the politician. He even made it onto the cover of Titanic this month, Germany's favorite satirical magazine. There is also a spoof advertisement for an English language school doing the rounds on YouTube.

The latest instance of fun at Westerwelle's expense comes from a Facebook fan page created especially for "Mr Westerwave the Outside Minister." The jibes are of a gratuitous nature, with pranksters taking comments by Westerwelle in German and translating them word-for-word into English -- without making any concessions for word order, syntax, grammar or even real English words. Indeed, "Westerwave" takes its name from a translation of the second half of Westerwelle's name -- "Welle" means "wave" in German. His position is listed as "outside minister," a literal translation of the German "Aussenminister."

The site, which has over 20,000 fans and hundreds of comments on each of Westerwelle's quotes, is littered with nonsensical sentences like: "No one can reach me the water," "Wednesday we got oathed," and "before the success the gods have put the sweat." As well as such Westerwave-ian delights as: "I have to pluck a chicken with my press speaker." For their followers' amusement, the Westerwavers also have a Twitter page.

Germany's business daily Financial Times Deutschland has gotten in on the act as well with an online quiz entitled "English For Beginners -- Like Mr. Westerwave." In the preface to the quiz, they write that "the new foreign minister is on an introductory tour. And everywhere he goes the language of choice is English. So that it doesn't get too embarrassing for Germany, we suggest you try our language quiz for Guido's first round of small talk."

Westerwelle Takes A Break: Was He Having English Lessons?

Writer Roger Boyes, author of a book on the funny side of life in Germany called "My Dear Krauts" and also a regular correspondent for the Times of London, went into detail about what Westerwelle's reaction really meant. "The first week after winning an election is  about setting a tone," Boyes writes on his blog, "Typisch Deutsch" (or "Typically German"). "The correct tonal pitch for a future foreign minister and vice-chancellor is to be modest and sunny and promise the world that they will be dealing with an open and self-confident Germany. It is not about being zickig (uptight) to the first foreign reporter who asks him a public question."

Westerwelle Doing His Best To Put Invitations To Tea Behind Him

As for Westerwelle himself, he is doing his best to put his contrariness and blustery invitations to afternoon tea behind him. At his first meet-and-greet with EU diplomats in Brussels, Westerwelle insisted on making small talk in English, telling everyone it was "my first day here" and thanking folks in French. Italian foreign minister Franco Frattini, who had had a phone conversation with Westerwelle, stuck up for his colleague saying the German politician didn't need any extra help with his English.

Whatever jokes are made, Westerwelle can at least console himself with the fact that he is not being teased as badly as another German politician -- at least, not yet. Heinrich Lübke was president of West Germany between 1959 and 1969 and is remembered for, among other things, not being a very good public speaker and what is known as "Lübke English." It's a sort of English that bears more than a passing resemblance to the Westerwave kind.

One of the most widely reported of Lübke's linguistic bloopers occurred during a visit by the British queen in 1965. Lübke and Queen Elizabeth II were waiting in a castle garden when the German president wanted to let his esteemed lady visitor know that "The Last Post" would soon be played. In German this would be: "Gleich geht es los." And the correct translation would be: "It will start very soon." What Lübke actually said? "Equal goes it loose."

In 2005, a CD called "Equal Goes It Loose: Heinrich Lübke speaks for Germany" was released by the Kunstman publishing. Whether Westerwelle is eventually accorded the same honor remains to be seen. 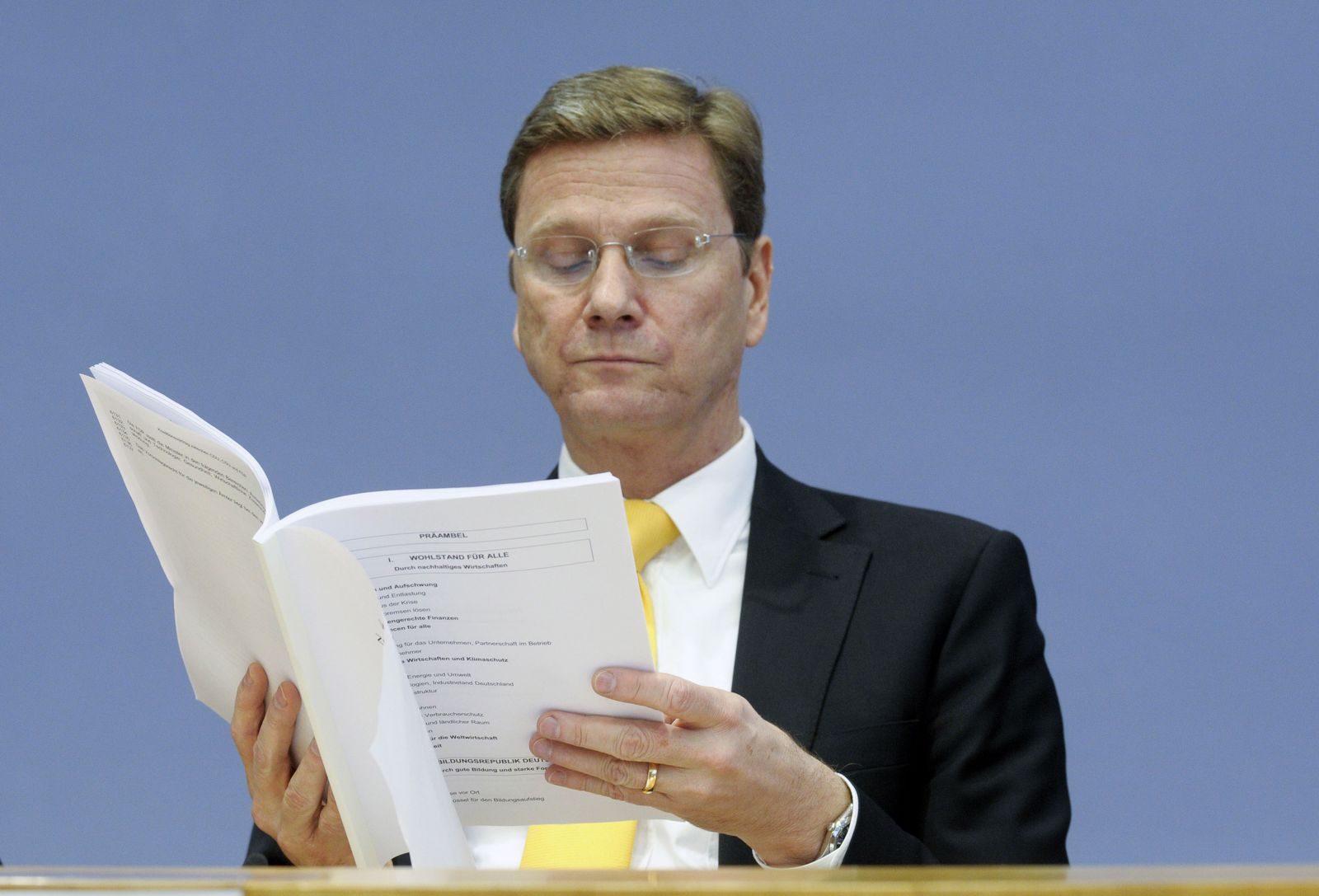 The new foreign minister looks confused: Is this document in English? Guido Westerwelle's linguistic back-and-forth with a BBC reporter continues to have humorous repercussions.