Everyone knows Schroeder, Charlie Brown's buddy in the "Peanuts" comics who pounds out Beethoven tunes on his miniature piano all day. Germans too are Schroeder fans, with Snoopy and friends having been around in the German language for half a century. 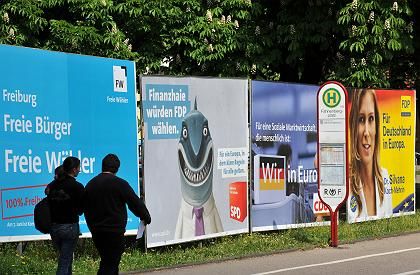 European Parliament campaign signs are plastered across Germany these days. Many of the candidates -- such as Silvana Koch-Mehrin, whose poster is seen on the far right -- have a lot of names.

Schroeder, though, as it turns out, could never have been named Schroeder had he been born in Germany. The moniker is not allowed as a first name under the country's somewhat restrictive naming directives. Indeed, children must be given names that clearly denote gender and they cannot be given family names as first names. Out-of-the-ordinary designations are likewise verboten. Moon Unit Zappa could not have been German.

The law in Germany, though, isn't just concerned with first names. On Tuesday, the country's highest court upheld a ban on hyphenated last names longer than two names. Which means that Germany's Development Minister Heidemarie Wieczorek-Zeul is on safe ground. But were she at some point in her life to tie the knot with SPD politician Thorsten Schäfer-Gümbel, she could not change her name to Heidemarie Schäfer-Zeul-Wieczorek-Gümbel, or any other combination thereof.

The ruling comes as something of a surprise -- beyond the fact that the court was considering the issue in the first place. On the one hand, a quick glance at the campaign posters plastered across Germany in preparation for the European Parliament elections reveals just how common hyphenated last names have become.

The center-left Social Democrats are sending Wolfgang Kreissl-Doerfler into the race alongside Dagmar Roth-Behrendt, with alternatives Marten Tretbar-Endres and Stella Kirgiane-Efremidis waiting in the wings. The business friendly Free Democrats are led in the European elections by Silvana Koch-Mehrin. Jesko von Samson-Himmelstjerna and Dr. Godelieve Quisthoudt-Rowohl find their places on the center-right Christian Democrats' list alongside Claudia Stuckmann-Invernizzi and Birgit Schnieber-Jastram. (CDU candidate Isabell von Slis-Soglio gets an honorable mention in the anagram bonanza.)

One could be forgiven for thinking that many in Germany could hardly wait to add a third name to the alphabet soup.

On the other hand, during February hearings in the case, brought by a lawyer and a dentist who wanted to combine their names into a chain of three, some court justices sounded as though they thought the state should stay out of the debate. But in the end, the court elected to uphold the law by a 5:3 margin.

Still, there has been some loosening of naming guidelines in Germany in recent years, particularly when it comes to first names. There was a time when foreigners had difficulty convincing German officials to rubber-stamp the non-Teutonic names they had chosen for their children. Bureaucrats have also, in the past, balked at allowing too many given names.