German Chancellor Angela Merkel is in crisis mode. Again. But this time, it hurts worse than before and has shaken the entire country. The attacks over the summer in Würzburg and Ansbach were merely harbingers of Monday night's bloodbath. Now, 12 people are dead and dozens more wounded after an attacker drove a semi-truck into a Christmas market in the heart of Berlin.

Merkel was fully aware that something like Monday's night's attack could happen here too -- indeed, that it was almost inevitable. But that hasn't mitigated the shock. "This is a difficult day," the chancellor said. The country, she went on, is "united in deep mourning."

When Merkel read her statement on Tuesday regarding the events of the previous evening, she said what she had to say in such a situation. She expressed her sympathy for the victims and their families, thanked the first-responders for their work, conveyed faith in the work of the investigators and announced that the perpetrators would be punished accordingly. And she promised: "We will find strength for the life we want to live in Germany -- free, united and open." 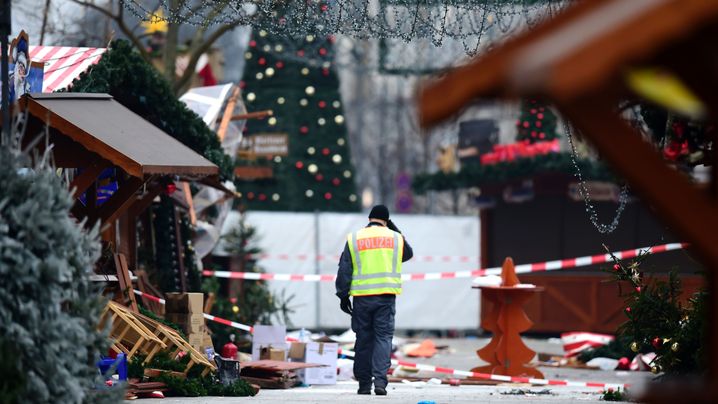 They are words that gave voice to her shock and dismay. But also to the determination to confront terror.

But even as she was making her statement, the chancellor was fully aware that the correct tone, excellent police work and the steadfastness of liberal values would not be enough to contain the crisis. That helps explain why she also conveyed a political message during her five-minute appearance.

It would, she said, be "particularly difficult for all of us to tolerate" a situation in which the perpetrator had come to Germany as a refugee." It would be, she continued, "particularly repulsive with respect to the many, many Germans who are engaged daily in providing assistance to refugees and with respect to the many people who really need our protection and who are doing their best to integrate."

As she was speaking, it wasn't yet known that police had begun doubting whether the man they had arrested on Monday night was actually involved in the attack. The man, who apparently came to Germany as a refugee from Pakistan roughly one year ago, had been arrested not far from the site of the attack. Investigators had hoped that they had captured the driver of the truck.

Merkel's message was an entreaty to Germans to avoid casting an eye of blanket suspicion on all refugees in the country. She is well aware of the deep divides in German society and she is concerned that this attack might poison the atmosphere even further, a development which could make it all the more difficult for her to win re-election in fall 2017. 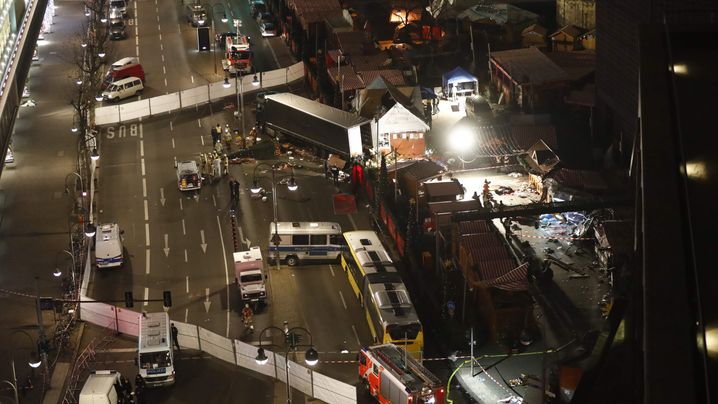 And her message was also aimed at those fellow conservative politicians who have always been critical of her refugee policies. First and foremost Horst Seehofer, the combative governor of Bavaria who also leads the Christian Social Union, the Bavarian sister party to Merkel's Christian Democrats (CDU). Even before Merkel delivered her statement in Berlin, the Bavarian cabinet met in Munich. Seehofer, it was clear, had been deeply affected by the attack in the German capital and dark rings circled his eyes.

Fight on the Right

What Seehofer then said into the journalists' cameras sounded like yet another declaration of war against Merkel. "We owe it to the victims, their families and the entire populace to rethink and readjust our entire immigration and security policies." When Seehofer says "our policies," he really means those of the chancellor.

Seehofer has been fighting for months against Merkel's political course in the refugee crisis. He isn't just concerned about holding onto power in Bavaria, he is also worried about growing political competition on the right wing in the form of the populist Alternative for Germany (AfD). Overnight, the AfD sought to gain momentum from the attack by directly blaming Merkel's policies for making it possible in the first place and with derisive comments in social networks.

Recently, the CDU and the CSU had been trying to patch up their relationship. A joint meeting of party leaders is currently scheduled for the beginning of February at which the Bavarian sister party is slated to announce its official support for Merkel's new candidacy for the Chancellery. But the attack could thwart these plans if Seehofer decides that recent reforms to tighten the country's asylum laws don't go far enough.

But even members of Merkel's CDU are agitated. Take Klaus Bouillon, the CDU interior minister for the state of Saarland, who first spoke of a "state of war" in describing Monday's attack and later tried to backpedal. "I will avoid using the term war in the future," he said, distancing himself from his own remarks. "It's terrorism."

'Not the Day for Consequences'

Seehofer's immediate call for political consequences following the attack did not go over well in Berlin. Thomas de Maizière, the interior minister, provided an update on the investigation's progress on Tuesday and the CDU politician appeared to be choosing his words very carefully while doing so. "Let's not retreat," de Maizìere said in an appeal to the populace. "Don't let them control our lives with fear."

When asked for his response to Seehofer's demand, the interior minister grew taciturn. He pointed out that he would be visiting the scene of the attack later in the day together with the chancellor and the foreign minister and that he would be attending a worship service afterward. "Today," he said, "is not the day to be talking about consequences."

Later in the day, de Maizière joined Merkel and her SPD colleague Frank Walter Steinmeier as they laid white roses at a make-shift memorial to the victims. As he did so, Seehofer and his government ministers in Bavaria prepared to call a special meeting of the cabinet Tuesday afternoon. The issue to be discussed: Germany's security and refugee policies. 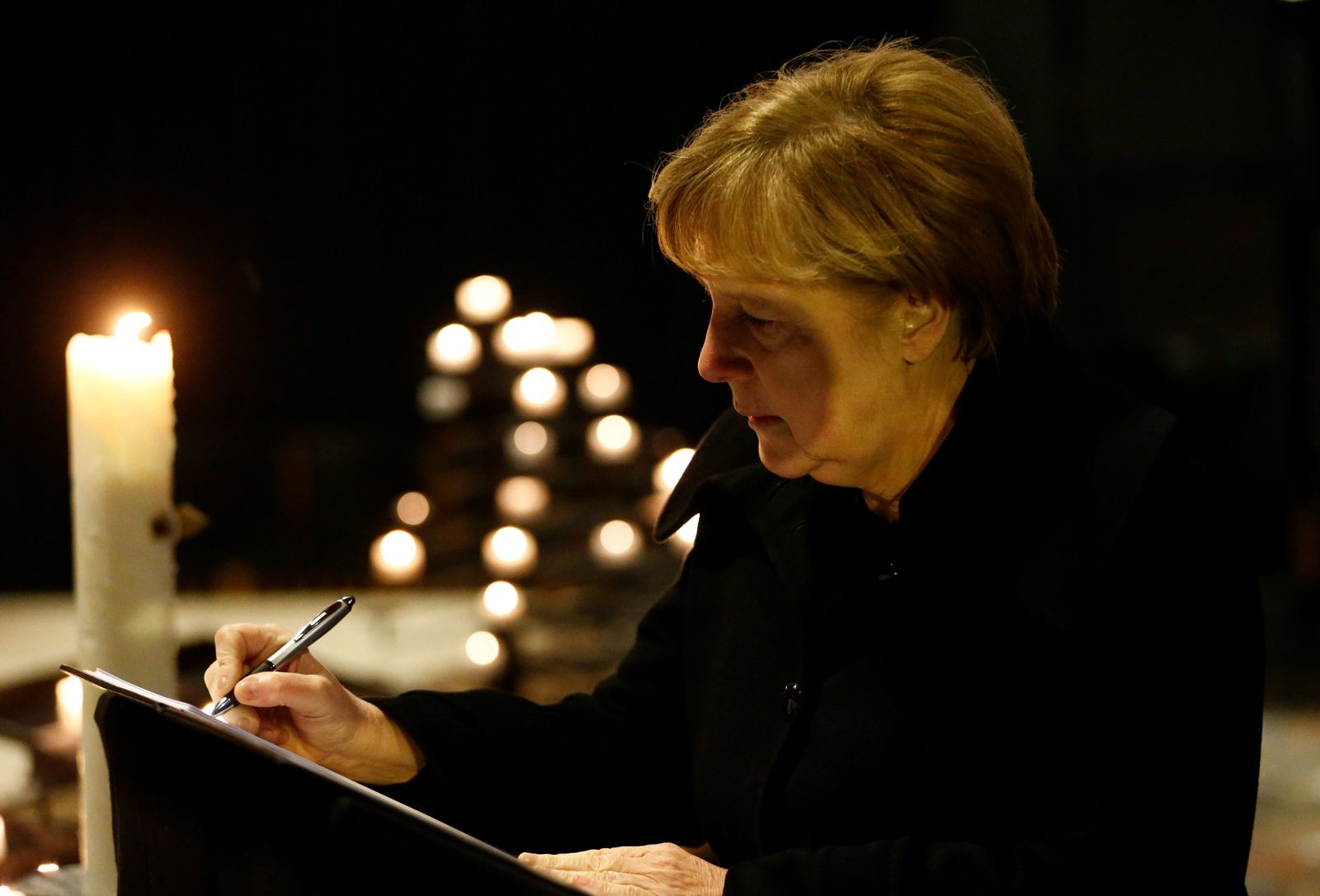 German Chancellor Angela Merkel signs the book of condolence for the victims of the Monday night attack. 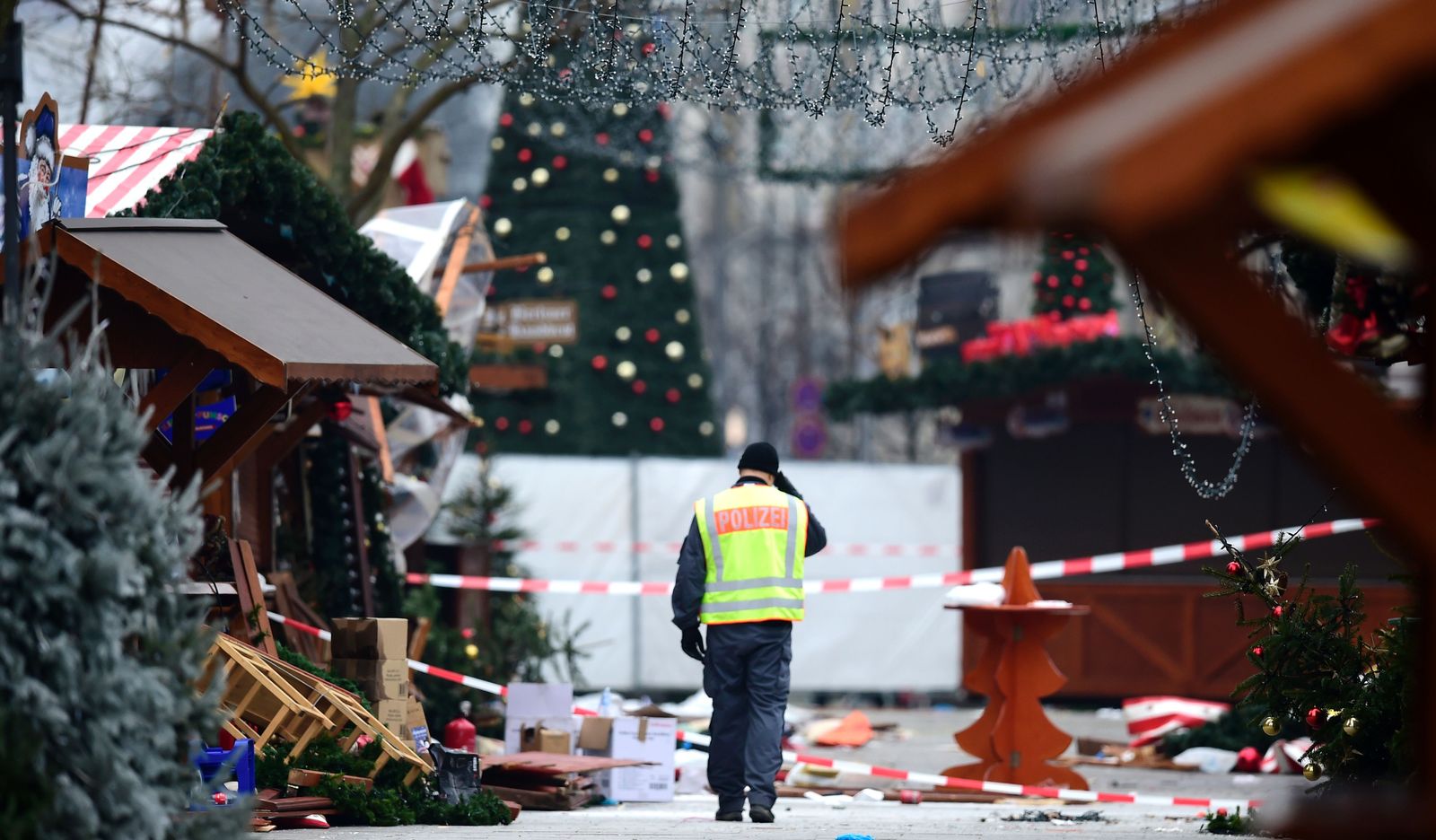 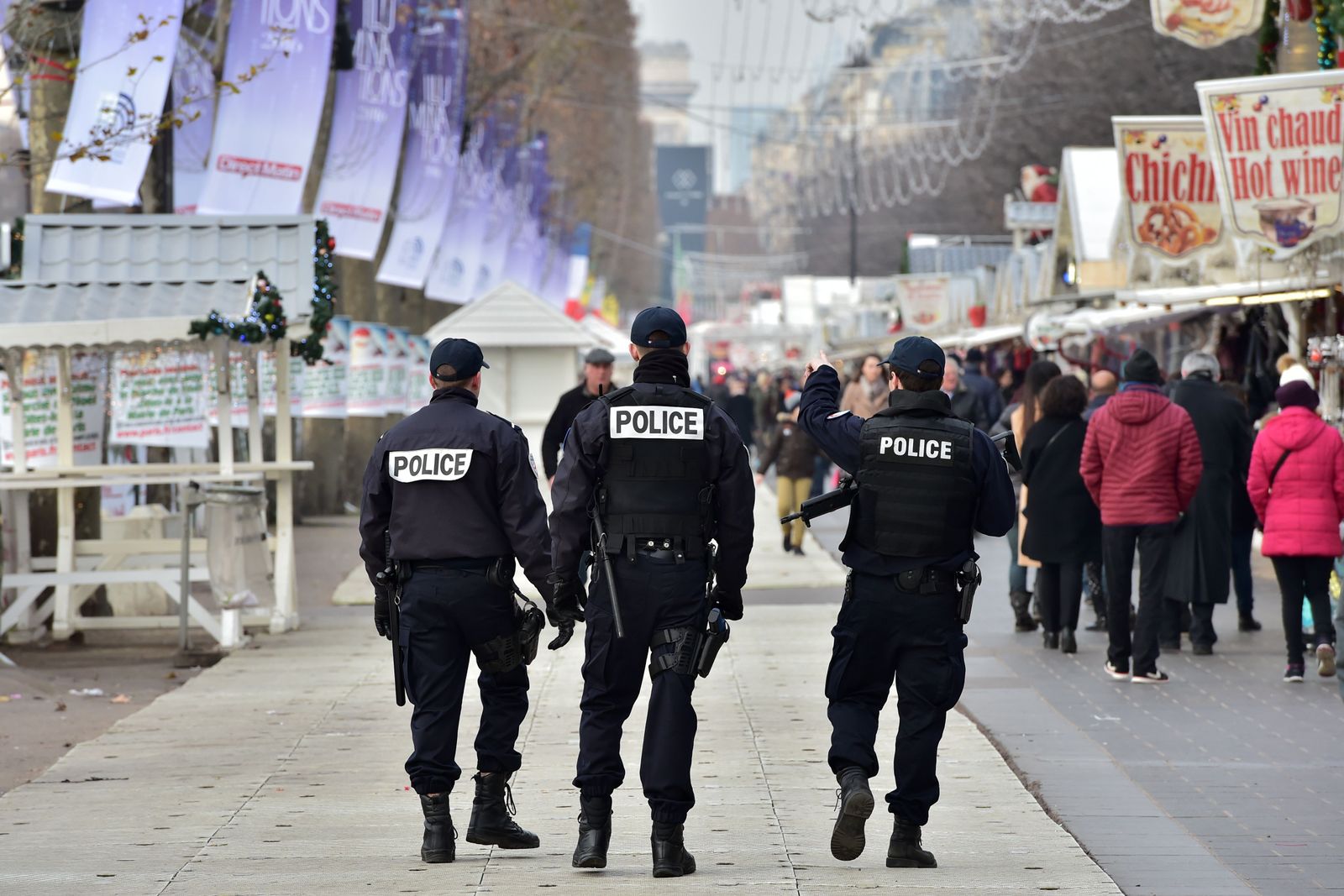 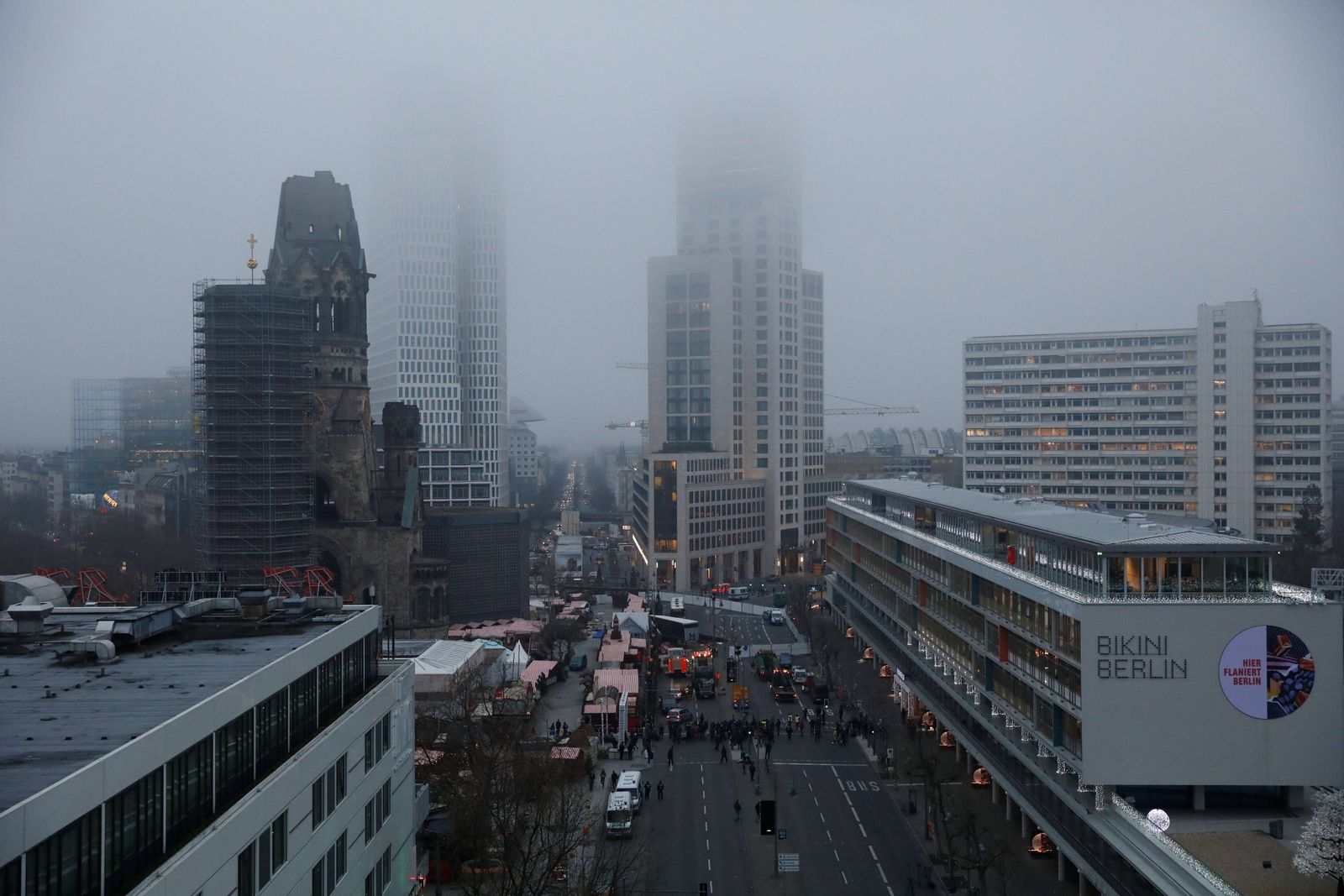 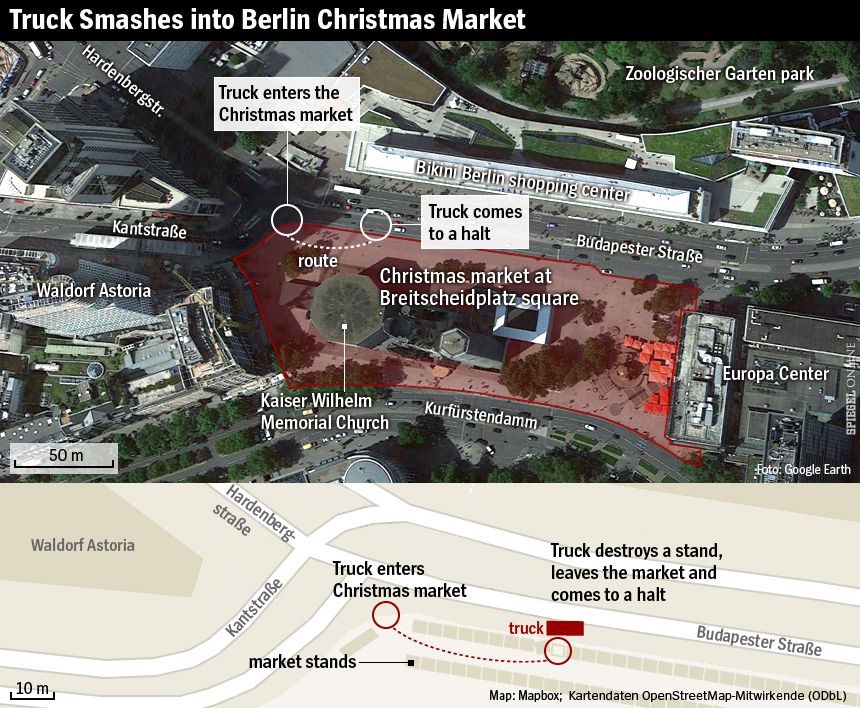