It was almost exactly 30 years ago that Germany's chief federal prosecutor Siegfried Buback set off to work in his chauffeured, dark blue Mercedes for the last time. Shortly after 9 a.m. on that April 7 morning in 1977, a motorcycle pulled up next to the car at a stoplight on the outskirts of Karlsruhe in western Germany. The motorcycle passenger proceeded to fire at least 15 bullets into the car. Buback and his 30-year-old driver Wolfgang Göbel died at the scene; the head of the chauffeur service Georg Wurster, 33, succumbed to his injuries six days later.

The assassination was the most spectacularly brazen attack yet carried out by the German terrorist group Red Army Faction (RAF) at the time and was the first in a series of bloody crimes that led to 1977 being subsequently referred to as the German Autumn. But the professional nature of the attack also meant that it was a difficult one for German authorities to solve. Three RAF members were eventually prosecuted and sent to jail for the triple murder. But new information revealed this weekend indicates that the police might have missed the most important perpetrator: They might have failed to get the gunman.

An article in DER SPIEGEL this week, based on interviews with two former RAF members, reports that Stefan Wisniewski may have been the RAF terrorist who fired the deadly shots in Karlsruhe. In 1981, Wisniewski was convicted of aiding and abetting in five murders relating to the bloody kidnapping and eventual murder of Hanns-Martin Schleyer, president of Germany's employers' association. But he was not fingered in the Buback murder and has since been released from prison.

A case of justice gone wrong?

On Monday, German Interior Minister Wolfgang Schäuble called on Germany's domestic intelligence agency, the Bundesverfassungsschutz, and the Federal Criminal Police Office to investigate the matter "immediately," a ministry spokesman told reporters. The state prosecutor for Baden Württemberg, Klaus Pflieger, who has jurisdiction of the case, said on Monday that his office is considering launching preliminary proceedings against Wisniewski. 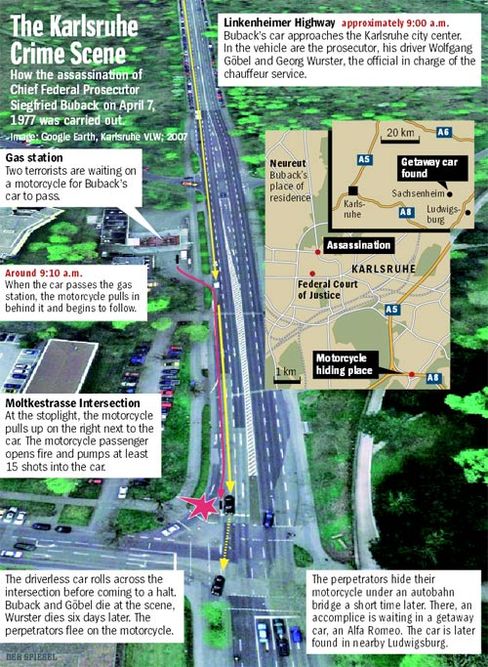 The assassination of Siegfried Buback.

But that's not the only investigation to be launched this week. The SPIEGEL article also raised the possibility that the German prosecutor's office withheld information during the Buback trial in order to protect the identity of an RAF informant. The result may have been the mistaken conviction of Knut Folkerts and an ensuing life-in-prison sentence for his presumed role in the Buback case. While Folkerts was hardly an angel, having shot and killed a Dutch policeman during his arrest in Sept. 1977 in Utrecht -- he was released from prison in 1995 -- he was very likely not even in Germany at the time of the Buback murder. A clear case of justice gone wrong?

Interest in the Red Army Faction -- also known as the Baader-Meinhof Gang -- has risen in recent months as two well-known members of the group have come up for possible parole. On March 25, Brigitte Mohnhaupt -- who had been sentenced to five life terms plus 15 years for her role in, among other crimes, the murder of Siegfried Buback -- was paroled after 24 years in jail. A further RAF member, Christian Klar -- who is presumed to have been directly involved in the Karlsruhe assassination -- has asked to be pardoned by German President Horst Köhler, though his sentence doesn't allow for parole until 2009.

Last Wednesday, Klar's quest for amnesty received a boost when Siegfried Buback's son Michael Buback publicly urged President Köhler to pardon the former terrorist. In an article in the Süddeutsche Zeitung, Michael Buback said he had received information from "RAF circles" that Klar had not been on the motorcycle on that April 7 morning in Karlsruhe, nor had he been involved in planning the attack.

Verdict may be incorrect

The information came from former RAF member Peter-Jürgen Boock. In a weekend interview with SPIEGEL, Boock indicated that as far as he knows, the two attackers on the motorcycle were Günter Sonnenberg and Stefan Wisniewski. He admitted to having no detailed knowledge as to who was driving and who fired the shots, but said that it seemed logical, given Wisniewski's weapons training and the authorities' assumption that Sonnenberg was driving the motorcycle, that Wisniewski had fired the shots. Wisniewski was convicted in 1981 for his involvement in the Schleyer murder and sentenced to two life terms. He was paroled in March 1999.

The SPIEGEL article further indicated that the German authorities have known for years that the verdict was likely incorrect. Former RAF member Silke Maier-Witt told the Federal Criminal Police Office 17 years ago that Knut Folkerts was in Amsterdam on the day of the assassination.

Furthermore, Germany's domestic intelligence officials were told two decades ago that it was likely Wisniewski who fired the deadly shots. RAF member Verena Becker, the story alleges, told the Bundesverfassungsschutz two decades ago that Wisniewski had been the one on the back of the motorcycle. Becker, who was convicted in December 1977 to life in prison for six counts of attempted murder, agreed while in prison to cooperate with the German authorities. Despite her information, however, the verdicts against Klar, Sonnenberg and Folkerts were never revisited.

The latest developments in the decades-old RAF saga has ripped open wounds in German society that had only just begun to heal. The group, founded by Andreas Baader and Ulrike Meinhof among others in 1970, was the radical, violent extension of Germany's "1968 Generation." It was a time in German post-war history when an entire generation born after World War II began questioning their parents as to what exactly their involvement with the Nazis had been. It was partially as a result of the "68ers" that the country began facing up to its violent past.

A gun, a screwdriver and a hair

But while many from that generation went on to become successful left and center-left politicians, others stepped over the line into violence. The RAF ultimately was responsible for the deaths of 34 people, including a number of bodyguards and drivers. During the kidnapping of Hanns-Martin Schleyer, for example, four of his companions died in a hail of bullets. Other RAF operations included the assassination of Dresdner Bank head Jürgen Ponto in 1977, the murders of Siemens manager Karl Heinz Beckurt and diplomat Gerold von Braunmühl in 1986, and the murder in 1991 of Detlev Karsten Rohwedder, head of the agency responsible for privatizing East German state-owned enterprises. The group announced its dissolution in 1998.

Amid the numerous calls by politicians for clarity in the Buback case and massive media attention on Monday, the Süddeutsche Zeitung has also published its own version of the Karlsruhe assassination. According to the Munich daily, there are no indications whatsoever that Wisniewski took part in the murder of Buback. According to the evidence collected prior to the 1981 trial, there is no evidence that Wisniewski was in the three apartments the RAF had rented in Karlsruhe.

Evidence against Verena Becker, who pointed the finger at Wisniewski, is plentiful, however. The murder weapon was found in her possession as was a screwdriver belonging to the motorcycle's tool set. One of her hairs was likewise found in one of the helmets worn during the attack.

Klar, for his part, has continued to refuse cooperation with the authorities, preferring to remain true to his RAF creed of maintaining silence about the group's activities. None of the others involved in Buback's murder, including the recently freed Brigitte Mohnhaupt, have seen fit to disclose what they know.