It's easy to become a German. That, at least, is the conclusion to be drawn from the first set of results for Germany's new citizenship test: Around 99 percent of those taking the test so far have passed. 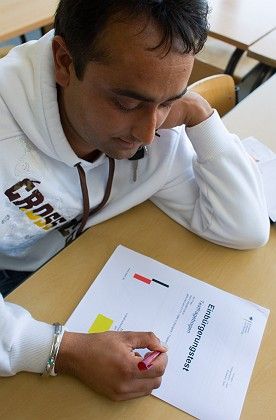 Now what was the capital of Germany again?

Berlin's interior minister, Ehrhart Körting, announced the results Thursday, welcoming what he called "the positive result." The pass rate for Germany as a whole was 98.9 percent, while the Berlin pass rate was a spectacular 99.4 percent -- of the 1,647 applicants who took the test in Berlin during September and November of 2008, only 10 failed.

The test was criticized ahead of its introduction in September 2008 by opposition politicians and representatives of the immigrant community. Prominent Green Party politician Hans-Christian Ströbele said at the time that he worried that "many Germans would not pass the test either" and claimed that many questions "miss the point."

Now there are concerns that the test is too easy. "If everyone passes anyway, then we don't need the test," Green Party politician Bilkay Öney told the newspaper Die Tageszeitung. Rainer-Michael Lehmann from the business-friendly FDP party told the paper the test should be revised, "otherwise we can do without it."

However Kurt Wansner, an expert on immigration issues for Angela Merkel's conservative Christian Democrats, defended the test. "Even if people have just learned the answers by heart, they might never have thought about such questions if the test didn't exist," he said.

To pass the test, which is one of several conditions for becoming a German citizen, applicants have to answer 17 questions correctly out of 33. The tests are drawn from a catalogue of 310 questions prepared by academics at Berlin's Humboldt University, and they deal with topics ranging from dog registration in Germany, to the words of the national anthem to the meaning of the term "Stasi." (Answer: the East German secret police.) Applicants can take the 60-minute test, which costs €25 ($35), as often as they like.