While the Society of Saint Pius X (SSPX) is trying to practice belated damage control regarding the scandal over Bishop Richard Williamson's comments denying the Holocaust, further information has emerged about anti-Semitism within the German branch of the ultra-conservative Catholic organization. 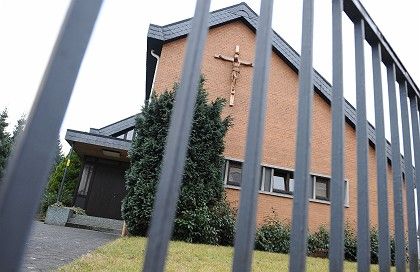 An SSPX chapel near Hanover: The German branch of the SSPX is under fire over anti-Semitic comments in its publications.

The latest issue of the SSPX's newsletter for German-speaking countries, which has been obtained by SPIEGEL, contains several anti-Semitic statements. "The Jewish people were once the chosen people. But the majority of the people denied the Messiah on his first coming," reads the February issue's cover story, entitled "Signs of the End of the World." According to the newsletter article, this is why the Bible's Gospel of Matthew states, "His blood be upon us and upon our children," a phrase historically used by some Christians to justify anti-Semitism.

The newsletter also states: "And this terrible curse arose. The Jews were expelled from their country, repeatedly rejected and persecuted up until our own time." Therefore, the Jews must "convert as a people to Christ.  Eventually the mercy of God will triumph over the stubbornness and blindness of the Jewish people." The newsletter was only published last week -- long after the controversy over Williamson became public.

The German television station ARD also reported having found anti-Semitic statements in the publications of the SSPX's German branch. According to ARD, an SSPX text published in 2000 contains the following: "There is no doubt that Jewish authors played a significant role in the destruction of religious and moral values during the last two centuries." Another section reads: "The lending of money at high interest rates and the usury practiced in this way (...) made the Jews hated."

"There's some truth in there," the head of the SSPX's German branch, Father Franz Schmidberger, told ARD in an interview. However he said that the SSPX wished to "live together in peace with all people, including the Jews."

Referring to the passage about the Jews converting to Christianity, Schmidberger justified it by saying it was not an ethnic but a religious statement. He told ARD that even Saint Paul talked of "a veil which was over the Jewish people  and which prevented them from recognizing and adopting the Messiah."

The Central Council of Jews in Germany reacted angrily to the revelations. "I was alarmed to discover the SSPX has anti-Semitic attitudes," Vice President Salomon Korn said. Admittedly the statements in the SSPX's German publications could not be compared to Williamson's denial of the Holocaust, he said, "but Williamson is the tip of the iceberg."

The basis for the SSPX's ideas were ancient prejudices against Jews, he said. "Genocidal anti-Semitism grew on the basis of this religious approach, which is now centuries old. And this kind of thinking is responsible for the Nazis' crimes against humanity."

ARD also discovered that Schmidberger had said in an October 2001 speech that a desecration of a cross where, for example, an arm is torn off the figure of Christ, is objectively a greater sin than the Sept. 11, 2001 terrorist attacks. In the interview with ARD, the priest confirmed this statement and defended it. Reacting to the interview, the spokesman of the German Bishops' Conference, Matthias Kopp, said the statement was unacceptable.

The SSPX in other countries has been taking steps to dampen the scandal caused by Williamson's comments. On Monday, Williamson was removed from his position as head of a seminary in Argentina. The Web page of SSPX in the US has also removed an article arguing that Jews are guilty of deicide for killing Jesus. The page was viewable as recently as last Friday.

The scandal over Holocaust denial erupted at the end of January when Pope Benedict XVI lifted the excommunication of four SSPX members, including Williamson. At the time he took the step, the pope was apparently unaware of Williamson's views on the Holocaust nor was he aware of the interview with Swedish television. The ensuing scandal has seriously damaged the reputation of the Catholic Church in Germany and elsewhere.

Last week, Benedict called on Williamson to retract his views on the Holocaust. In an interview with SPIEGEL, however, Williamson rebuffed the pope, saying that he first had to study the issue. He said he was planning on reading "Auschwitz: Technique and Operation of the Gas Chambers" by Jean-Claude Pressac. "Historical evidence is at issue, not emotions," Williamson told SPIEGEL. "And if I find this evidence, I will correct myself. But that will take time."

On Monday, Jewish leaders in the US said after meeting with top Vatican officials that they were optimistic about Vatican-Jewish ties. A group of American Jewish leaders will meet with Pope Benedict XVI in person on Thursday to commend him for his "firm stand" on Williamson, the Associated Press reported.

With reporting by Peter Wensierski