A witness who testified on Wednesday has provided important information about the way Beate Zschäpe, the key defendant in the case against Germany's neo-Nazi terrorist cell, spent her years hiding out.

The 44-year-old man testified before a Munich court, describing how Zschäpe, one of his neighbors in a multi-family house in the eastern city of Zwickau, liked to drop by his basement for a glass of Prosecco, an Italian sparkling wine.

"From time to time we'd eat together behind the house and talk about this and that -- trivial things," he told the court. Zschäpe's former neighbor described the young woman as having also been friendly to other residents. Once she even brought a pizza over for her neighbors, who were sitting behind the house and watching football on television, he said.

Zschäpe had introduced herself as "Susann Dienelt," one of the pseudonyms prosecutors say she went by. She was popular in the neighborhood, and locals called her "Dienelt-Maus," a play on the name of a cartoon character and the German word for mouse, which is often used as diminutive pet name.

The witness said Zschäpe lived together with the terrorist cell's other two members, Uwe Mundlos and Uwe Böhnhardt, for years in the apartment in the eastern state of Saxony. She allegedly told him that one of the men was her boyfriend and the other was his brother, and that they were employed as car transporters.

There had barely been any contact with the two men, the witness said. "Sometimes they would say 'Hello,' or 'Good Morning,' but that was it," he said. Zschäpe, though, had been different. From time to time she would join the witness and other neighbors in his basement, where they would drink and chat together. Zschäpe apparently didn't like the taste of beer and preferred Prosecco, Italian sparkling wine. The witness said Mundlos and Böhnhardt never joined in, and that politics hadn't been discussed.

A Hitler Picture on His Television

In response to a question by the presiding judge, however, the witness admitted that a picture of Adolf Hitler had stood on his television in his basement. But he claimed it had no political meaning and was merely a remembrance of a neighbor who had died. The picture hadn't bothered Zschäpe or anyone else, he added.

Prosecutors claim that Zschäpe attempted to create a front for herself, Mundlos and Böhnhardt that enabled the neo-Nazi terrorists to plan and perpetrate their attacks without getting caught. She is currently answering to charges that she was a member of the National Socialist Underground, a far-right terrorist organization, and an accomplice in the murder of nine men, mostly of Turkish descent, and in the slaying of a policewoman. She also stands accused of attempted murder relating to bombing attacks conducted in Cologne's old town and in the city's Mühlheim neighborhood, a district with many residents of Turkish origin. Four men who are believed to have provided support to the terror cell are also on trial.

On Nov. 4, 2011, Mundlos and Böhnhardt committed suicide as police closed in after they robbed a bank. The indictment against Zchäpe claims that she then poured gasoline throughout their shared apartment and set it on fire. The subsequent explosion was so forceful that it blew off part of the building's external wall.

'There's a Fire Behind You'

Another witness described a bizarre scene after the explosion. The 31-year-old woman said she drove into Frühlingstrasse, the street where the house was located, in her car and saw the burning roof trusses. "I then stopped because the entire street was filled with smoke," she said, adding that she got out of her car to get a better look. At that moment, Zschäpe came around the corner with two cat carriers in her hands. The witness said she then spoke to Zschäpe, saying, "There's a fire behind you, we need to alert the fire department." Zschäpe then turned around, looking shocked, saying, "My grandmother is still in the house," according to the witness. "Then she turned around and walked back," the witness said.

An 89-year-old woman did in fact live in the building, and she was rescued in time by relatives. But experts from the state office of criminal investigation said the elderly woman had indeed been in danger and that the explosion could have knocked down the wall to her apartment. Prosecutors also accuse Zschäpe of having risked the death of an elderly woman and two carpenters.

For the first time in days, sympathizers from within the right-wing extremist scene could be seen in the courtroom audience on Wednesday, including two men with shaved heads, one of whom had tattoos up to his neck. During one of the breaks in the proceedings he walked up to the divider between the visitors' stand and the defendants and greeted both co-defendant Ralf Wohlleben and his attorney. He did not comment on how he knew Wohlleben. Wohlleben has been charged with being an accomplice to murder for allegedly supplying the murder weapon that was used in the series of killings.

At the start of the trial, as many as 500 police officers provided security, but there are now markedly fewer present, district court president Gerhard Zierl, who is responsible for organizing security measures, told reporters. He said that if the situation changed, more officers could be called in. "We have taken precautions so that all forces can quickly be brought together," he said. 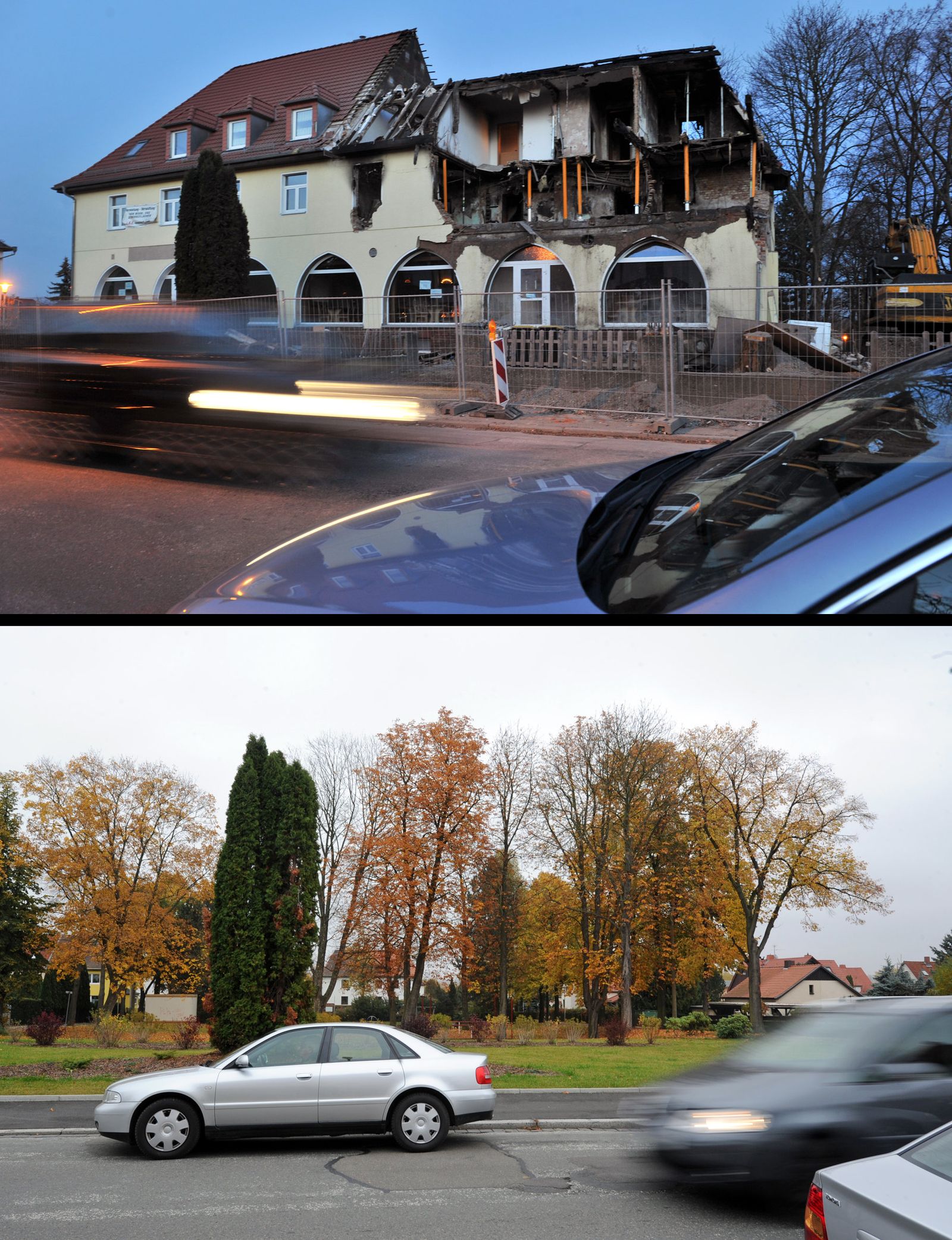 The house in Zwickau that suspect Beate Zschäpe is believed to have destroyed in an arson attack.