SPIEGEL: Mr. Joop, the German fashion group Escada has just become the latest victim of the economic crisis. Were you sad to hear about the bankruptcy?

Joop: Very much so. Escada was once one of the biggest brands in the world. Everyone knew the name. Margaretha Ley, the founder, was a pioneer. But to save a brand like that, you need a completely new and provocative approach.

SPIEGEL: Would you have been interesting in saving Escada?

Joop: Escada would certainly be an interesting project. It's is almost a tragic-comedy that it's precisely this brand, that always wanted to do everything so perfectly and correctly, that has failed in the end. But now that Prada and Helmut Lang have bored us nearly to death with their intellectual minimalism, people want colors again. The 80's. Chic. That's where I see a good opportunity for Escada.

SPIEGEL: Any real plans to get involved?

Joop: No, I already have enough to do. But it is certainly appealing.

SPIEGEL: The decline of Escada was a textbook example of what is going wrong in high fashion. First the founder died, then came years of mismanagement, and in the end, the investors changed almost faster than the collections.

Joop: And unfortunately this pattern can be seen in far too many (fashion) houses. Dozens of fashion brands are simply being passed from one pair of dirty hands to another. And they are losing more and more credibility, as they go.

SPIEGEL: What remains of German fashion?

Joop: Technology. Tailoring. Logistics. Precision. None of that should be underestimated. But having said that, at the recent Berlin Fashion Week, the industry was swimming in champagne, going from one after show party to the next. The only thing that was missing: real fashion.

SPIEGEL: The industry is suffering all over the world. Christian Lacroix has gone bankrupt, and Cavalli, Versace, and Ferré are all feeling the pressure of the crisis. How are things for the luxury sector right now? 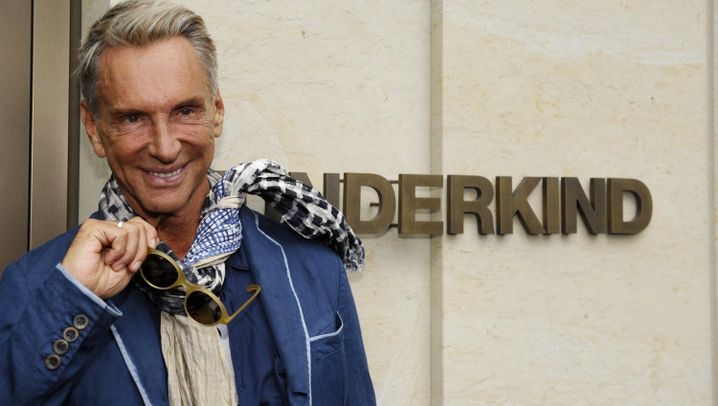 Joop: Very bad. In recent years, the industry has lived beyond its means, spending vast amounts of money and being inspired by infinite vanity -- rather than by quality or even ability. Yet there are more and more brands, labels and fashion companies. If sex is everywhere, then nothing is sexy anymore. If fashion is everywhere, then nothing is fashionable. And that's where we stand today. A good entrance is important, but so is a good exit.

SPIEGEL: How much worse can it get for the industry?

Joop: It will be devastating. I anticipate many more bankruptcies in the near future. Some of the brands will never lose their credibility though. And some will need to be killed off properly so that they can be rediscovered later.

SPIEGEL: What have been your experiences with all the bankers, investors, analysts, and fund managers who seem to have been taking over in the fashion industry?

Joop: Those kinds of people always talked big but wanted to see the money up front. They did so much name dropping that I would be left wiping the sweat off my brow. Mostly though, they disappeared pretty quickly when the (financial) crisis came. The all-devouring crisis.

SPIEGEL: After selling your JOOP! shares at the end of the '90s, you founded a small company called Wunderkind. Your current collection for that label is called "Power and Poverty" and apparently it's all about the "power" of "poverty." Won't that come across as cynical to people who are more worried about keeping their jobs right now than about how they will afford one of your €2,000 ($2,865) robes?

Joop: The inspiration for a work of art, and the thought that goes into it, is free -- and free from any thoughts about what it will cost too. But when I bring the designs out of my small attic studio, the business of fashion begins -- and that means all those practical considerations and additional costs. True creativity comes out of scarcity. And that's what I mean with the collection's name. Those who are happy and well fed don't need to leave the couch. But someone with a small budget needs to be inventive. That is how I learned to work and to live. And now I have to see to it that a far leaner Wunderkind survives.

SPIEGEL: But you have the art collectors Gisela and Hans-Joachim Sander, who are worth millions, as partners in Wunderkind.

Joop: That has helped a great deal and will continue to be helpful. In times of crisis, it's important to stick together. But I've invested a great deal as well, and sacrificed things close to my heart.

SPIEGEL: Apparently you have sold several original paintings by Polish art deco painter Tamara de Lempicka. And you have taken on the business' risk yourself.

Joop: Right now I am everything: business manager, financier, organizer and creative director.

SPIEGEL: That could lead to a sort of schizophrenia - if, for example, the artist Joop designs something that the business manager Joop doesn't think is financially viable.

Joop: Precisely. But I'm familiar with that -- previously I was practically public enemy number one inside my own company. You quickly come to be seen as temperamental and grumpy. But who else is going to keep things in order?

'For the Hope of a Certain Recovery'

SPIEGEL: You see the current crisis as an opportunity?

Joop: For the hope of a certain recovery. My clients say that the Wunderkind things just make them happy. Just look at how the global accessories market developed, particularly for hand bags. One moment, the hype about certain bags would blow up like a greedy pig's stomach. The next minute, those same handbags were as undesirable as 45 malignant tumors. And women had to beware that they didn't carry their "It bags" for five minutes longer than they should, because suddenly they were unfashionable. Fashion needs to be beautiful, classic, sustainable and practical. When they are wearing it, it should be transformative. The best fashion is also good therapy.

SPIEGEL: Why have you saddled yourself with all this at Wunderkind?

Joop: Because it makes me happy to get up in the morning. Anyway, in 2008 we had a 100 percent increase in turnover.

SPIEGEL: How much was that worth, in actual Euros?

Joop: It is all about developing the company, both financially and creatively. The product design interests me a lot but its economic success that makes a brand sexy. And that doesn't happen overnight.

SPIEGEL: Wunderkind apparently only has a turnover of around €6 million.

Joop: Numbers like this are not important. We're developing well and that's what is important in the long run: good potential that goes beyond this crisis. In Paris I am now considered a couturier for the first time. At the moment I'm working on the next Parisian show in October. That city is no paradise, it's more like a slaughterhouse. It is unbelievably hard work but it's wonderful.

SPIEGEL: And expensive. What does a show like that cost?

Joop: In Paris €500,000 disappears quickly. But there are also ways to make less look like more. And I am good at economizing. The point is to survive.

SPIEGEL: Are you afraid the economic crisis could catch up with Wunderkind?

Joop: Of course. There is always a fear of bankruptcy in times like these. I don't want Wunderkind to be my cactus blossom, blooming like magic for a moment but then becoming too heavy for the stem, and ultimately destroying it. So I need to watch out that I don't get carried away with my own experiment. In any case, there isn't a lot interesting me at the moment outside of my own little world in Potsdam.

SPIEGEL: Still, a few months ago, you did announce that you wanted to take over now-insolvent lingerie firm Schiesser.

Joop: That's still pending. Schiesser is so wonderfully German. I almost see it as my patriotic duty. But as soon as my name was mentioned in connection with the firm, all sorts of people suddenly wanted to come on board. Which doesn't make it any easier.

SPIEGEL: Where would you get the money?

Joop: I'm working together with some partners, who are financially very sound.

SPIEGEL: Would Joop be the front man there?

Joop: Never! At Schiesser I wouldn't be the face of the company, I'd be the head. But the receiver is obviously interested in getting as much money as possible for the company. Which is understandable from his point of view -- even though it might all end with someone in charge there, who doesn't have the faintest idea about the garment industry.

SPIEGEL: How good are your chances there?

Joop: I'm going to wait and see, especially because I have a lot of other opportunities. I continuously get letters asking for assistance from needy companies. I can just see myself -- a Prussian Joan of Arc, riding through the ruins of the economy wearing armour and carrying a lance.