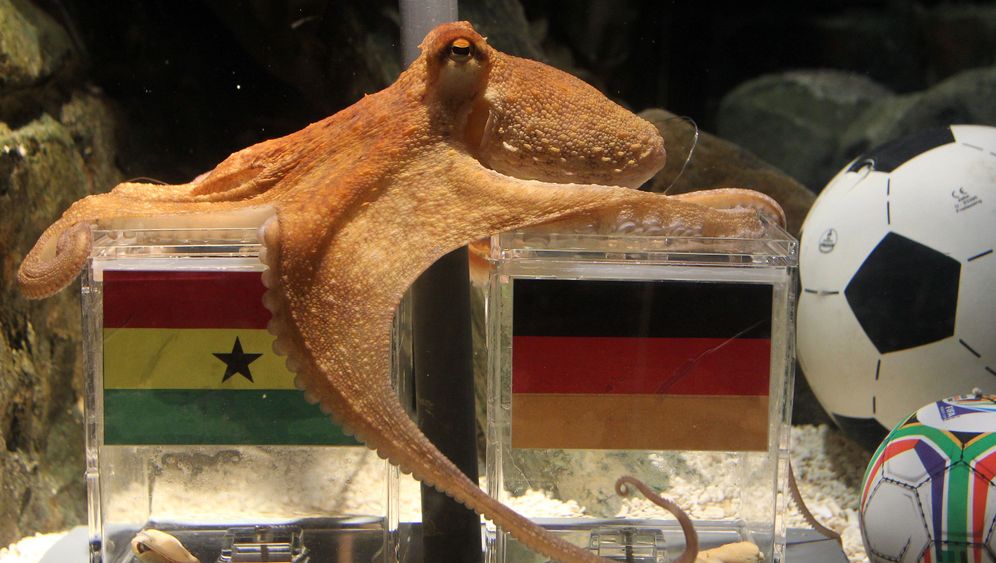 German football fans have another reason to hope for a good night on Wednesday, when their national team plays Ghana in the 2010 World Cup: Paul the octopus has tipped their team to win.

Paul is a smallish cephalopod in the western German city of Oberhausen who finds himself in a klieg-lit tank at the Sea Life public aquarium before each Germany game during this year's world championship. His handlers bait glass cubes with mussels and mark them with national flags. The mussel Paul chooses first is meant to indicate -- at least to his handlers -- a prophecy for the upcoming game.

Skeptics scoff, but Paul is two for two so far.

He foresaw the German trouncing of Australia on June 13. A few days later -- bucking the bookies -- he called Serbia's upset over Germany.

Anton and a Morsel of Fruit

On Tuesday he picked a mussel from the German glass, which puts him in line with professionals who favor Germany to beat Ghana tonight. And if they win, the Germans will advance from the group stage to the final 16.

Paul has a better record than other football-prognosticating animals, like Petty, a pygmy hippo at the Chemnitz Zoo who picked Germany to beat Serbia, or Leon, a porcupine -- also in Chemnitz -- who liked Australia. The Chemnitz staff turns to a new animal for each game, and their latest consultant, Anton the tamarin monkey, has chosen a morsel of fruit in favor of Ghana.

Given the nature of their prognostications, the animals have trouble calling a tie. But such trifles haven't slowed down Paul. According to Sea Life staff, the octopus notched an 80 percent record of forecasts during his last assignment -- the UEFA European Championship tournament in 2008.