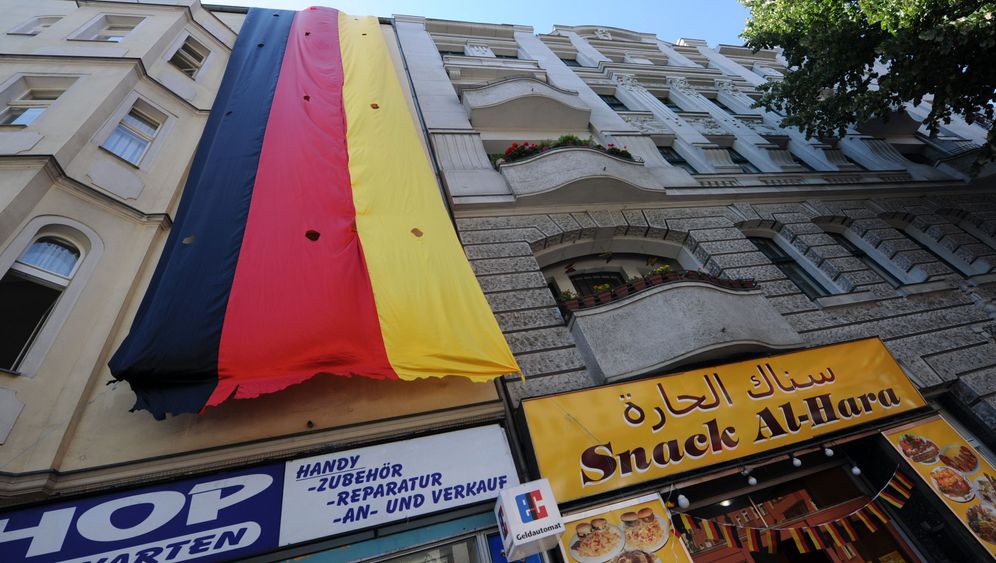 He will not stand for any ridicule. "I will defend the German flag," says Ibrahim Bassal resolutely, hitting the glass counter three times to make his point. Over the past few days he has been through a lot and what he has experienced has only strengthened his resolve. "I won't let anyone get at it," he adds.

Bassal is the proprietor of Bassal's Elektroshop, a store selling mobile phones and other electrical goods, in the working-class district of Neukölln in Berlin. No other neighborhood in the German capital offers such a diversity of cultures. Left-wing students rub shoulders with Turkish immigrants, while local businesses include the "Al-Hara" snack bar and the "Sultan" bakery. There are more than 160 nationalities recorded as living in Neukölln, and around 35 percent of the district's population are foreigners.

The interior of Bassal's store is somewhat chaotic. Empty cartons are stacked up on one side, on the other there are palettes holding bottles of fruit juice. The laminate flooring is worn. There are also little German flags scattered everywhere, the sort that one sees attached to car windows all over the city at the moment to mark the football World Cup. The back of the shop looks like a building site; the place is currently being renovated.

A small stocky man with short black hair, Bassal, 39, leans over the counter. "We celebrate every football game out on the street. This is our own small 'fan mile,'" he says, referring to the specially designated areas set aside for football fans to watch games in the city.

"We have hung little German flags outside for years," Bassal explains. But this year, he and his cousins decided they would do something different. They placed a special order with a textile company, and soon a giant German flag worth €500 ($616) was hanging on the outside of the building where Bassal's store is located. Measuring 22 meters tall and 5 meters wide (72 feet by 16 feet), the over-sized banner covers five stories. For Bassal, a German with Lebanese roots, the flag is a symbol of cultural integration. "We live in Germany and we also belong to Germany," he explains.

Outside, a girl glances up as she walks by. "That's totally cool," she says, catching sight of the giant piece of fabric. But not everyone is happy about the monument to national pride over Bassal's store.

Over the past few weeks, ever since the start of the football World Cup, the neighborhood has been the scene of what local media are calling the "Neukölln flag fight." Left-wing activists have called on sympathizers to destroy the German flags which can be seen everywhere, arguing that they are a symbol of German nationalism. There has been a rash of thefts of small flags attached to car windows. Some of those who decorated their vehicles with flags say they now only display the flags when they are actually driving their cars.

As for the giant flag, Bassal and his friends, who have all donated money to the cause, have already had to replace their flag twice. Since they adorned the building in black, red and gold, the colors of the German flag, they have become the target of attacks, presumably from members of the radical left-wing scene, and someone even tried to set fire to the flag.

A Reminder of WWII Nationalism?

The first time the flag was attacked, a man tried to climb up the building and tear it down. The man yelled out that it was a reminder of World War II, Bassal says. That intruder didn't achieve his aim -- but two days later, someone else did. Ten masked men appeared unexpectedly during the night and tore the fabric down. But Bassal and his cousins would not be deterred -- they immediately bought another flag.

Only a few days later, however, the new banner was gone. The culprits had apparently climbed onto the roof of the house and tampered with the flag. In the meantime, a third version of the giant flag has been hung in front of Bassal's store. "It has now cost us €1,500," Bassal notes. And hostilities have not yet ceased.

During the day, Bassal says, people from the left-wing scene come into the shop and berate him. The other day a woman rushed in. She wanted to know how Bassal could hang the German flag up in a country with such a history, and said she wanted to round up another group to tear the flag down again. The only option was to call the police, Bassal said.

The Right to Love Germany

Bassal himself simply cannot understand why all the protests are coming from the German side. "For the fascists, we are foreigners and for the anarchists, we are ..." He pauses a moment. "Actually, I have no idea what we are to them."

There is a moment of silence in the store. The only sound is the hum of a person-sized refrigerator. Then a small boy enters the store. He reaches for one of the small flags meant for mounting on cars.

"What sort of flag do you have there?" Bassal asks the child.

"Germany," the child, who also appears to be of immigrant descent, replies quickly.

"And what do you love?" Bassal asks.

"Germany," the child calls out.

"We won't let them take away our beautiful Germany, the one we have in our hearts," Bassal explains and bangs on the glass counter again. He was born here, he has always lived here and he feels like a proper German, he says.

"We have to get away from calling these people foreigners," agrees customer Manuel Hornauer. The 19-year-old student has come to the store to look at electronic devices but stays to hear about the giant flag in detail. "It is super when they are so integrated."

There is also a positive side to the so-called "flag flight," Safter Cinar, the spokesperson for the Turkish Federation in Berlin, told the Berlin-based daily Berliner Morgenpost. The fact that the immigrant population is so proud of their German flags, and the German football team, is a good sign of integration, he said.

Because 11 out of the 23 players on the German national side come from immigrant families, it is easier to identify with them, Cinar argues. Talented players like Tunisian-German midfielder Sami Khedira and playmaker Mesut Özil, a German of Turkish descent, "show that the children of immigrants have a chance here," Cinar says.

As for the fact that many of the German flags in Neukölln appear alongside Turkish flags, Cinar sees this as a positive thing. "One does not cancel the other out," he concludes.

'Germany Is Going to Win'

Now the little shop is almost full of people, all curious to hear the story of the giant flag. Bassal has mixed feelings about his flag's notoriety. It is good that people want to know about it, he notes, but he is a little concerned that there will be further attempts to tear the flag down. In order to keep the flag safe, he is going to make sure there is someone on guard in the store at all times, day and night.

Still, when it comes time for photography, he recovers his mood fairly quickly. He wants to change first. "To make myself look good," he says.

Bassal disappears through a door and returns a few seconds later wearing a scarf and a hat in the German colors. He is determined to wear the national colors with pride.

And there is another thing he is also sure about. "Germany is going to win the World Cup," he says.