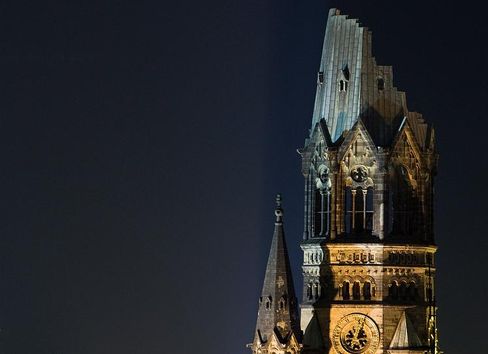 The Gedächtniskirche is meant to look damaged. But now it is crumbling.

The bad news came late last year. Architects discovered that vibrations from passing traffic were shaking the foundations of the Kaiser Wilhelm Memorial Church in Berlin. Even worse, water was making its way into the jagged tower, freezing in winter and cracking the stone. The preserved World War II ruin was in danger of becoming nothing more than a pile of rubble.

And this year, it still is. Ten months after the November 2007 warning -- and numerous fundraising initiatives later -- money for the needed renovation is still short. Funds add up to less than three-quarters of the €4.1 million (nearly $6.1 million) experts estimate the work will cost. Private collections come to €500,000, the city will kick in €1.5 million, and Berlin Mayor Klaus Wowereit recently promised an additional €1 million of proceeds from the state-run lottery. But the funding hold-up means the much-needed makeover has already been pushed back a year, from early 2008 to next spring. And the delay means another vicious Berlin winter will have a chance to gnaw away at the memorial tower.

At the moment the situation there is not dangerous, stones will not fall on passersby, Wolfang Kuhla, chair of the church's management board, told SPIEGEL ONLINE hopefully. We are working to prevent that situation.

The wrecked church, one of Berlin's most recognizable landmarks, stands out even in a country filled with war memorials. Built in 1895 in tribute to Kaiser Wilhelm I, bombs and shells obliterated much of the structure during World War II. But the tower, or most of it, survived, and after the war West Berliners decided neither to demolish it nor to rebuild it. Rather, it was left as a powerful monument, graphically depicting the horrors of war. The ruin is flanked by two modern buildings -- a bell tower and a working church consecrated in 1961.

The structure requires periodic care to ensure it remains in the proper state of deterioration. Three years ago, the last time the memorial was in trouble, businessman Hans Wall stepped in with a private donation of €750,000. This time, a parade of events have been scheduled to lure in private contributors: 10 kilometer runs, modern art sales, even a rubber duck race in the Spree River scheduled for September 13.

But no large donor, be they public or private, has been forthcoming, and Kuhla expresses frustration with large Berlin-based businesses' unwillingness to chip in. Even the city's €1.5 million contribution will not be available until 2009 because the fund is limited to projects in the former East Berlin until then.

The church, which is located not far from West Berlin's famous Zoo Station, is symbolic for reasons other than World War II. During the Cold War, the area around the Gedächtniskirche was the beating heart of West Berlin. It anchored the glitzy shopping strip Kurfürstendamm, built partly to show off the glories of capitalism in an island surrounded by communist East Germany. The massive department store Kaufhaus des Westens (KaDeWe), nearly opposite the church, was (and still is) a monument to consumerism.

Since reunification though, focus has shifted away from the central drag of the former West. Some ask if the city and church's seeming inability to come up with enough money to renovate is an East versus West affair. Berlin is a daunting €60 billion in debt, but has invested heavily in the renovation of huge swathes of former East Berlin.

Looking for Sympathy and Funds

The Gedächtniskirche Is the Old West proclaimed the headline of a recent op-ed in the Berlin Tagesspiegel newspaper. The author argues because of its location and because it recalls an artificially divided city, the memorial has had a hard time securing both sympathy and funds -- especially from Berlin's governing coalition which pairs the Social Democrats with the Left Party, a political grouping partially made up of East German political elites.

I would disagree with that idea," Manuela Damianakis, a spokeswoman for city development, told SPIEGEL ONLINE. "We work for the whole city, not just for one part. She added that the city is committed to funding the church through a combination of private, municipal and possibly federal funds. 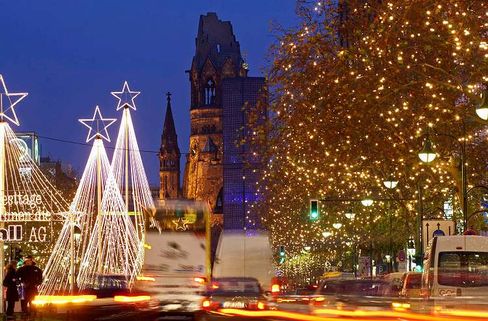 Berlin's west is still good for a Christmas market every year, but most tourists now spend their time in the east.

The Berlin Senate has put aside some money for the quarter of Charlottenburg where the church is located, but seems more interested in propping up the area as a commercial rather than a tourist attraction. Damianakis says the Berlin parliament, known as the Senate, is likely to earmark between €8 million and €10 million to "clean up" Ku'damm this fall -- from a different fund than that contributing to the memorial church renovation. Still, it is unlikely the cash infusion will turn back the clock on the street.

Residential areas in Charlottenburg are still well-groomed, but Ku'damm isnt what it used to be. Gone are the arthouse cinemas and glitzy boutiques. Teenagers with H&M and Zara shopping bags outnumber tourists stopping to take pictures of the ruin. Nearby Zoo Station used to be a major hub. Now disconnected from long-distance routes, it is tiny and run down in comparison to the shiny new central train station, which opened in 2006 in Cold War-era no man's land.

I would do better if I relocated to Alexanderplatz, said a sausage vendor near the station, referring to the commercial center of the former East Berlin. "Not so many people come through here anymore."

Damianakis said in case the church's managers can't close the final fundraising gap, it is such an important memorial that we will find a solution.

While most tourists to Berlin spend their time in the former East visiting the Museum Island and Brandenburg Gate, the Gedächtniskirche remains important enough to lure some visitors westwards. Like British traveller Matthew Hinkins.

I just took a picture of those shell holes we helped put in the side there, said Hinkins, who counted the church among the most memorable things hes seen in Berlin. He was surprised by news of the long-term struggle to renovate. The city must be in bad shape, he said.

The memorial is at its most impressive at night, when floodlights illuminate the craggy tower and the chain stores are quiet and dark. At a recent sundown, souvenir salesmen were rolling up their wares, charcoal portraitists were packing up their stools and two teachers were trying to round up a school group from Frankfurt.