This week German statisticians confirmed the first annual decline in consumer prices in the country for more than 22 years. 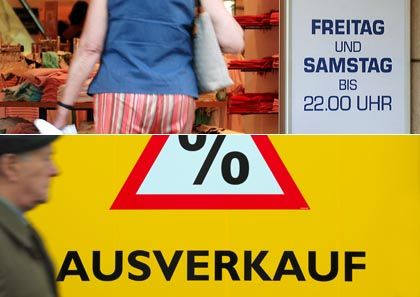 Drops due: The German consumer price index has fallen more than expected

The country's Federal Statistics Office released figures showing that consumer prices had dropped 0.5 percent in July compared to the same time last year. This is the first annual decrease since March 1987, before the reunification of Germany.

Meanwhile another indicator of price movements, wholesale prices, also dropped -- by 10.6 percent in July year-on-year, the biggest fall since the data began to be compiled in 1968.

This leaves Germany with minor deflation - the country's inflation rate made headlines when it went to zero in May, it then climbed up to 0.1 percent in June before dropping again in July.

The price drops, which were larger than expected, can be blamed on the fact that the price of crude oil has almost halved over the past year, going from around $147 a barrel to around $65 -- this also happened in 1987, the last time Germany saw this kind of deflation. The drops are also explained by a fall in food prices, which had been experiencing a global high and which are now between 1.2 percent and 3.3 percent lower than in July 2008. Additionally the current recession is also responsible for Germany's deflationary situation -- an oversupply of goods and services, a looming credit crunch, worsening unemployment, shrinking national growth rates and, generally, weaker economic activity all play a part.

Deflation can be of concern to an economy. A little short-term deflation is generally considered relatively harmless by economists -- in fact, it can even stimulate the economy because consumers, encouraged by lower prices, are likely to spend more. However if it goes on long term it can lead to a worsening downward spiral of declining demand and increasing unemployment such as that seen during the Great Depression of the 1930s.

The same deflationary trend has been seen in other European Union states. But fortunately, most analysts are predicting that Europe's deflation won't last long.

"We expect the current episode of extremely low or negative inflation rates to be short-lived," said Jean-Claude Trichet, president of the European Central Bank, in a statement released earlier this month.

The inflation rate preferred by the European Central Bank, the body charged with keeping the euro zone currency stable, sits at around or just below 2 percent. And although Germany's current deflation may go on for several months longer, other recent data has shown that markets are slowly recovering.

Factors that could worsen deflation rates are the feared credit crunch and a rise in unemployment, both of which would mean less money circulating in the economy.

So far the most noticeable effect of the recent deflationary figures has been on the euro's exchange rate. Because Germany is the largest economy in the euro zone, the country's inflation indicators have had a significant effect on the currency, which fell to a two-week low against the dollar and also dropped against the pound.