Hanife Ceylan never had any doubt that Stuttgart was her home. A daughter of Turkish Gastarbeiter, or "guest workers," invited to Germany help rebuild its industry and fuel its post-war economic miracle, Ceylan moved to this car-making city at the age of 15. Here she met the love of her life, took out a home loan and sent her children to German schools, from preschool through university. She speaks the local Swabian dialect better than she speaks Turkish.

Yet after 33 years in Germany, Hanife Ceylan (not her real name) is considering giving up her German passport.

"You can feed it to the dogs," she says. Wearing a white apron, she's standing behind the counter of her bakery in downtown Stuttgart, making sandwiches and sorting the pastries in the display case. "They never saw me as a real German."

By "they," Ceylan means the members of the "National Socialist Underground" (NSU), the neo-Nazi terror cell that consisted of Beate Zschäpe, Uwe Mundlos and Uwe Böhnhardt. The two men murdered nine people in broad daylight, simply because they bore foreign names, and Ceylan now knows that her name could just as easily have joined the others on a stone memorial in Nuremberg that commemorates the dead. She thinks often about why she escaped that fate -- and why the others didn't. And she's searching for an explanation. "If God doesn't want them to kill you, then they can try whatever they want," she says.

In November 2011, Beate Zschäpe set fire to the house where the neo-Nazi group had hidden. In the rubble of that burned-out apartment in the eastern German city of Zwickau, police found photographs, city maps and address lists with names and businesses belonging to people with foreign roots. These documents show that the three neo-Nazis conducted surveillance on dozens of places and people as they scouted potential targets.

Investigators also recovered a CD from the charred rubble and were able to identify seven of the photographs stored on it as streets in Stuttgart. The pictures were apparently taken in June 2003, by which point the NSU had already committed four murders.

The photographs show Turkish and Italian grocery stories, restaurants, well-populated streets and entrances to buildings. A man posing in several of the images is identified in the police files as "very likely" Uwe Böhnhardt. In one, he leans casually against a mountain bike, a dark-colored backpack on his back and a baseball cap on his head in the sunlight. It is a postcard image of a right-wing terrorist out on a sightseeing tour. In the background of the shot is Hanife Ceylan's store.

Investigators took the NSU documents they found seriously. So seriously, in fact, that in the summer of 2012 they summoned Ceylan and her husband to Stuttgart police headquarters. This is the day that Ceylan's life in Germany split into "before" and "after."

The "before" began in the summer of 1980 when, as a young woman, Ceylan followed her mother from a village in Turkey to Germany. Ceylan's parents were among the first generation of Gastarbeiter to come to Germany and they were grateful to the country that gave them work and a new life better than the one they left behind.

Ceylan grew up with this same sense of gratitude toward Germany. She cleaned toilets and offices, worked on the conveyor belt in a metalworking factory and in a pastry shop. She earned her own money and eventually married a man who was also from Turkey. "Germany was good to us," Ceylan says.

In 1993, the Ceylans opened a vegetable shop in downtown Stuttgart. They hired Italians, Russians and Greeks. Their German neighbors liked shopping at the store. Ceylan's husband included pork in the store's offerings and drank liquor with his customers. "It was really multicultural," Ceylan recalls of those days.

The vegetable shop became a neighborhood meeting point. Ceylan let people buy groceries on credit, gave a homeless man in the neighborhood sandwiches and discounted prices for her regular customers. Her children grew up in the shop, doing their homework among the tomato crates. Ceylan was now a business owner, someone who created jobs and paid taxes. It gave her a feeling of being able to give something back to Germany. When she traveled the world with her family, Ceylan was always proud to show her German passport at border checkpoints.

When business slowed at the vegetable store, she closed it and opened a bakery instead. She never thought of leaving Germany -- not until the day in the summer of 2012 when she received a letter informing her that the police wanted to question her and her husband.

The conversation lasted less than 30 minutes and Ceylan remembers only snatches of it. She was expected to answer questions just minutes after learning that murderers had had her in their sights and that the NSU had conducted surveillance on her business, just as they had with the store owners they ultimately targeted in their killing spree.

No one has yet been able to determine just how concrete the neo-Nazi trio's plans were. No one knows how often they cased a target without attacking.

But the police sought to learn as much as they could from the Ceylans. Was it possible, they wanted to know, to observe you easily from outside? Did you ever notice a man on a bicycle who photographed your shop? The couple shook their heads. In the space of these few minutes with the police, their 32 years of certainty about their German homeland fell apart. The conversation over, the police sent the Ceylans home and told them to ask their children as well if they had noticed anything at the time, nine years ago.

The second part of Hanife Ceylan's life in Germany, the "after," is marked by sleepless nights and copious tears. Ceylan asks herself, Why me? Why not me? When she closes her eyes, she sees her name listed next to those of the people the NSU murdered. Might she have become the terror cell's first female victim? Ceylan believes the busy foot traffic of the pedestrian zone where her business was located, or perhaps the close proximity to a tram line, may be what protected her from attack.

She has told her German friends none of this. She doesn't want their pity. At home, though, the family talks about little else. They believe they remember the day the police asked about. It was the same summer that the Ceylans' daughter was completing her final year in high school, when a man on a bicycle passed by their business and took pictures, claiming it was for the local newspaper.

Ceylan's husband also remembers another day when an unfamiliar man came to the back of the shop, ordered a case of beer, but then simply disappeared. And there was the Volkswagen Passat with a license plate from an eastern German city that once parked for a long time in front of the store.

These days, fear has a permanent spot at the Ceylans' kitchen table and a role in their daily life. Last year, for example, their landlady, who knows nothing about the NSU's earlier surveillance of the Ceylans' shop, installed smoke detectors in the bakery simply on the grounds that she considered any business run by Turks to be a potential target for attack.

Ceylan takes antidepressants now and sleeps at most four hours a night, before waking again early in the morning to wander restlessly through the apartment. "My mother needs to see a therapist," says her oldest son. No one offered help after that conversation with the police, he says. "We don't need some special task force," he adds, "just a bit of reassurance for my mother." He also wonders if the family should change its name.

Hanife Ceylan used to dream of a single-family home for her family. "Now I would only live in a building that also has a lot of Germans," she says. She feels a bitterness she never knew before. She feels it when she hears people say that the serial killings weren't so bad and she felt it when the court failed initially to reserve spots in the courtroom for Turkish media.

She doesn't believe the trial will bring justice. "They destroyed my world, too," Ceylan says of the NSU. She believes politicians need to do something, and wonders why the chancellor hasn't turned her attention personally to the issue of right-wing radical groups. Ceylan is certain there are others out there -- friends, copycats and supporters of Mundlos, Böhnhardt and Zschäpe -- who are eager to complete what the terrorists started. It is because of such people that the Ceylans' life has been ruled by caution and rules since that day at the police station. It is because of them that the Ceylans are careful to keep their real name a secret.

"You can't be in the shop alone on Sunday, because you have black hair," Ceylan tells her son when he wants to help at the bakery. Nor does she allow anyone to open the shop alone on the early shift. In winter, the bakery is locked from the inside until it's light outside. Even so, Ceylan is convinced that even if the police were to constantly stand guard across the street, no one could protect her and her family. Nor would it help in the least that Ceylan's passport bears Germany's coat of arms, identifying her as a German citizen. "If God wants them to kill us, then no one can save us," she says. 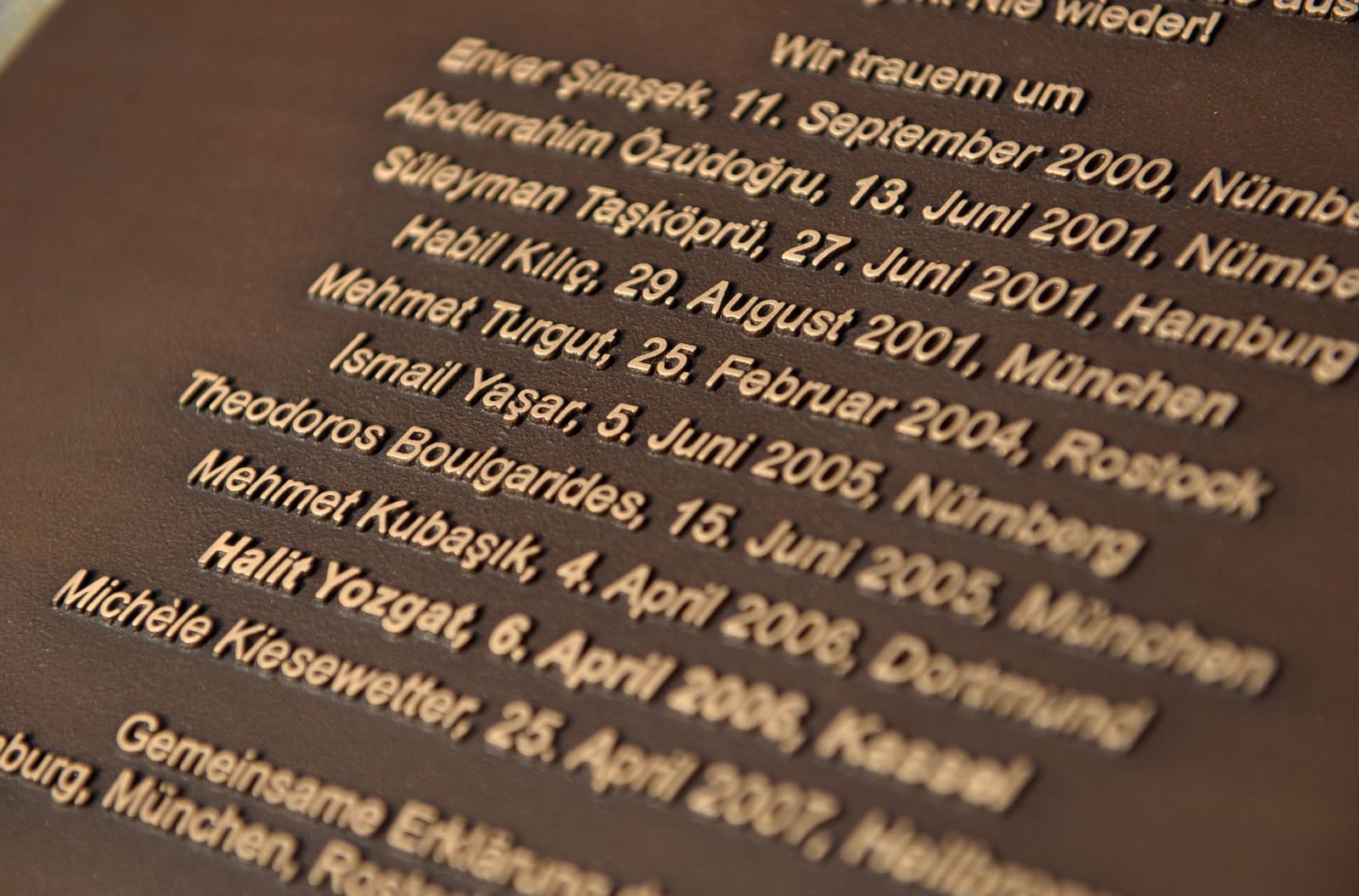 A memorial plaque to the victims of the NSU, the neo-Nazi trio that murdered 10 people.