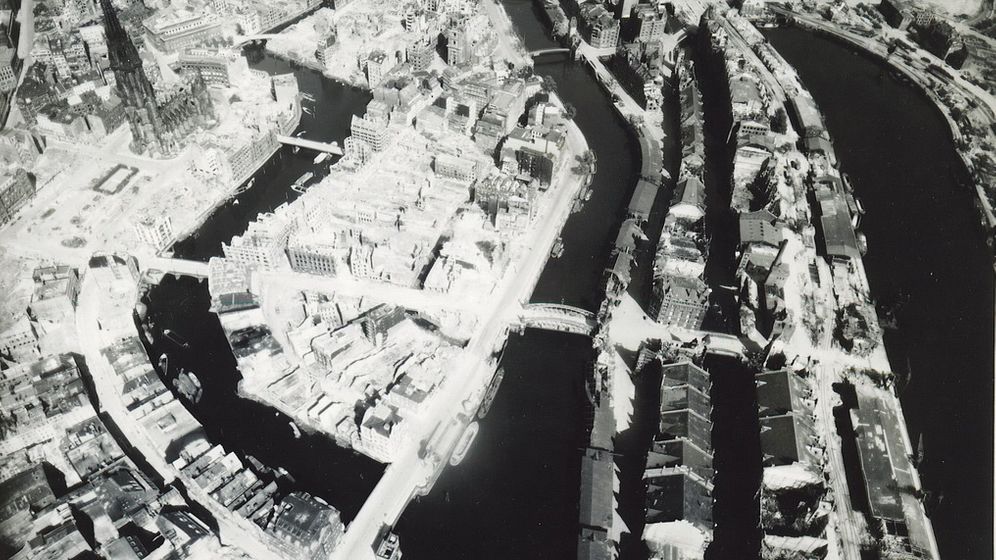 The instructions from the commanders of the 8th US Air Force were clear: Only the best and most experienced pilots were to be used on this special mission, which was taking place at the end of World War II. Hundreds of bombers, including B-24 Liberators, B-17 Flying Fortresses and B-26s, were going to thunder low through the air over Germany -- for six consecutive days.

The selected pilots were not, however, going to unleash their firepower on Hitler's broken empire, nor attack German armories, nor reduce cities to rubble. In fact not a single bomb was dropped. The aircrafts' crews did shoot -- but only aerial photographs. They created a photographic record of a defeated Germany, taking thousands of pictures, sometimes in impressive quality.

It was May 7, 1945. Germany had just signed documents for its unconditional surrender, which would come into effect the following day. The war was over -- and the Allies wanted to create an accurate impression of the extent of the destruction, taken from the planes that only a few weeks before had scattered deadly bombs across Germany.

According to the National Archives in Washington, the little-known "Trolley" mission took place from May 7 to 12, with a total of 2,013 US bomber flights, each carrying photographers among their crew. Small groups of three aircraft flew low, revisiting familiar routes. Taking off from British bases, the bombers flew over the Netherlands to northern, western and southern Germany. They circled above the destroyed cityscape of Berlin and the Ruhr area which had formed the economic heart of the Nazi state.

The result of these reconnaissance flights are striking and shocking images. For years, many of them collected dust in archives, private collections and in veterans' organizations. They document devastation, drawing up a kind of topography of the destruction. Pictures depict the skeletal ruins of houses, burned-out train carriages and broken bridges. Viewed from the air, Germany, a country which had previously prided itself on its culture, looked like an uninhabitable crater landscape.

But the photographic series was probably not intended to educate but rather to serve as a crude reward for the winning side's soldiers and pilots, reminding them of what they had achieved. Some pilots, however, were probably more shocked than proud at the extent of the devastation they were now documenting.

Exactly 65 years after the war, the images still inspire morbid fascination. The independent entrepreneur Matthias Jansing has long been interested in the history of World War II. He has invested considerable effort in scouring archives and the records of US veterans' organizations. The result is a collection of more than 3,000 images, including some aerial photos from May 1945.

Jansing's burning interest in the past was triggered by what he calls "family tragedy." His grandfather was killed during the battle of Stalingrad. "Despite his usually reserved manner, I often felt my father had tears in his eyes when he spoke of his father: He last saw him when he was just six," he recalls.

Jansing threw himself into his research. He viewed and amassed hundreds of images, some of which he resold. But money was not his main motivation. Instead, he was driven by his enthusiasm to unearth long-forgotten episodes of the war.

Sometimes, says Jansing, the mood aboard these flights resembled sight-seeing tours. They were informally called "Trolley Trips" -- as if the flight was a holiday jaunt rather than a journey into the airspace of the enemy they had recently fought against so bitterly. During the flights, up to two dozen people, most armed with cameras, crouched in the larger bombers. Many of the passengers, who included mechanics, ground staff and cooks, had never come close to the front line. But some professional photographers also joined the Trolley Trips.

Although the war had been won, security remained tight on the flights. Each group included at least one bomber with officers on board to monitor compliance with the strict rules. With a keen sense of irony, the US pilots dubbed these aircraft "Gestapo planes." The supervisor checked that the small groups of bombers kept to a certain schedule, did not fly too close to each other and did not fly any lower than 300 meters (around 1,000 feet).

Prevailing exuberance about the end of the war meant that many pilots forgot or overlooked these rules and dangers. As a result, there were a number of dangerous and even fatal incidents. On the first day of the mission, a US bomber containing 19 people crashed into the remains of a railway bridge in the town of Engers, near Cologne. All five crew members died, as documented in the US Air Force's Missing Air Crew Report dated May 7. The 14 other passengers were also killed, and their bodies were never found.

German prisoners of war complained about a hair-raising maneuver carried out by US pilots who allegedly flew deliberately just a few meters above the prison camp. However, pilots taking part in such stunts were threatened with penalties, the veterans association of one of the participating bomber groups told Matthias Jansing.

The US leadership was more interested in the impact of their drawn-out attack on German industry and its war economy than symbolic humiliation and power games. To this end, the planes frequently flew above the Ruhr area. The pictures they took included shots of the destruction of the hydrogenation plant Gelsenkirchen-Scholven, a place which had liquefied coal and synthetically manufactured gasoline for the war effort.

Another focus of the photographers were the former Third Reich airfields. The images from May 1945 already showed the first traces of the winners: Destroyed German aircraft had been hastily moved by Allied troops to make enough space for their own planes.