I recently ran into a man in Brandenburg who, for no obvious reason, began to rail against German President Joachim Gauck before spitting on the ground and storming away. Another time, I overheard a loud discussion about refugees in a bus, one that escalated into an exchange of ideas for how best to neglect or even abuse migrants: by giving them only bread and water, for instance, or keeping them in cages. In the nearby butcher shop, you can find people who don't care much about freedom -- people who demand a "clear position," a "bit more Putin" and less "palaver in the talk-shop," by which they mean the German parliament in Berlin. Outside the butcher's, there's a parked car with the bumper sticker: "death penalty for child abusers."

In its report on the state of German unity, which was celebrated on Monday, the government warned that Eastern Germany's xenophobia represents a danger to social harmony. No matter where it takes place, xenophobia can be dangerous for its victims, whether in East or West. But the government in Berlin has identified a greater danger in Eastern Germany -- one that threatens society as a whole.

Every time a snarling horde marches against a refugee home in Saxony, every time the chancellor is confronted with hateful tirades during a public appearance, I wonder if this behavior is typical for Eastern Germany. At first glance, my answer is: No. The majority of Eastern Germans clearly adhere to the rules of decency and democracy. Nevertheless, something "typically Eastern German" can still be identified in these excesses.

We saw similar incivility in front of asylum-seeker hostels in 1991 and during the protests against welfare reform in 2005, when members of the center-left Social Democrats were berated as "traitors to the workers." The danger of such combustions is particularly significant in the East.

According to my personal diagnosis, such types of behavior cannot be blamed on the current material situation in which these people find themselves. They are more indicative of a surfeit of emotional tension.

In the East, there is an exhaustion syndrome: Lots of people were forced to dramatically change their lives following 1989. They only briefly experienced reunification as liberation and many now behave less like free citizens and more like released prisoners whose learned demeanor does not correspond to present-day requirements. Surely this is a minority, but it's a loud and noticeable one.

From their days behind the Iron Curtain, they are still carrying the baggage of political expectations that today cannot be fulfilled. This includes the demand to be noticed and recognized by those in power -- just as they were before. Although communist functionaries were frequently hated, there were a huge number of them and they were omnipresent: both accessible as an advocate and available as the target of derision and contempt. This proximity of state and society wasn't just an invention of socialist propaganda. East Germany awarded myriad commendations, from the "badge for best knowledge" to the "order of merit." Almost everybody had an opportunity to be honored for something at least once a year.

In comparison, politics today feels distant and doesn't satisfy the need for recognition that developed prior to the fall of the Wall. Instead of the daily newspaper Bauernecho, with its cover stories on that month's most successful collective farmer, newsstands are now filled with tabloids featuring famous heroes whose lifestyles have nothing to do with our own. This reinforces the feeling of being left behind -- it magnifies the perceived distance to those "at the top." Anger builds up until it is vented when one of "them" turns up, be it Angela Merkel, Joachim Gauck or the next best state parliamentarian.

The hate is probably also the result of jealousy for the chancellor's personal devotion to the refugees. "Helmut, take our hand, show us the way into the economic wonderland," was the message on banners in 1991. And former Chancellor Helmut Kohl fulfilled that wish for many. But Merkel? She is considered cold and calculating, yet she showed emotion by embracing refugees. Has she ever done the same to anyone in the East?

East Germans fleeing from Hungary to Austria on Aug. 19, 1989

One of East Germany's legacies is the model of a closed society in which uniformity is more important than diversity. People learned little about interacting with people of different faiths and origins. In Eastern Germany, one's own religious tradition is largely irrelevant. The communists systematically gave preferential treatment to atheists over Christians and new cities were forced to make do without church towers. As such, it's hardly surprising that people now feel threatened by the arrival of those who define themselves outwardly by their religion. When I hear hateful tirades about faith and religion in Eastern Germany, I am reminded of what my own civics teacher used to say about the "preachers." What's learned is learned.

Communist rule may have ended in 1989, but the desperate yearning for homogeneity didn't change much in the East. There was now a variety of parties to choose from on the ballot, but that diversity wasn't always experienced on the ground. Indeed, new proselytizers of political conformity emerged -- such as the center-right Christian Democrats. Their "red socks" campaign against the Party of Democratic Socialism (PDS) -- which emerged out of the East German communist party and went on to become the present-day Left Party -- caused lasting damage. It made it even more difficult for the only significant Eastern German political party to integrate into the political landscape of newly reunified Germany. It was a campaign that disparaged those who thought differently -- for the sole goal of preserving power.

For many former East Germans, the campaign was an affront -- they felt scorned and ridiculed. Indeed, the "red socks" debate was essentially a xenophobic one, though instead of being directed against foreigners, it was aimed at those who thought differently. And in such campaigns of intolerance, the CDU chapter in Saxony often took the lead. It is almost gratifying now that the CDU itself is under attack -- but for the fact that the target of such attacks is not limited to the CDU. It includes all those who would support democracy, enlightenment and reason.

Given the decreasing willingness to defend the democratic system we now have, it has become clear that it was a mistake to have refused recognition to the Left Party for so long -- recognition for their undoubted role in establishing democratic order in former East Germany. Imagine, for a second, if the Left Party were to pull all of its elected officials from political office: Democratic structures would almost certainly collapse in some places. Even today, some are still waiting for a word of recognition for the political reeducation that took place in the party and in Eastern Germany. Instead, German President Joachim Gauck -- himself a product of East Germany -- became indignant when a member of the Left Party became the governor of Thuringia.

The aptitude for resisting political and economic processes was something West Germans learned, but East Germans did not. Sit-ins, student protests and strikes have been part of the toolbox of democracy for generations in the West. In the East there was the radical change in 1989, which is why calls for revolutionary uprising come quick. Those who don't have access to the tools of protest, scream out their rage. And sometimes this rage is taken advantage of: When it comes to helplessness, rage (and stupidity), the right-wing populist party Alternative for Germany (AfD) has proven more than willing to act as a medium.

Many of the current leaders of the AfD were socialized in the East and more or less covert praise for East Germany has become a part of the AfD repertoire. Who would have thought 25 years ago that the use of firearms against those who would transgress Germany's borders would be seriously discussed -- as was proposed by AfD head Frauke Petry? Who would have believed that a chancellor would be under fire for opening borders for humanitarian reasons -- the self-same reasons that led to the breaching of the Hungarian border fence in 1989?

It is extraordinary how quickly the new-old way of thinking has spread, and who is now in agreement with it: It didn't take even two years from the first protests by the anti-immigration group Pegida in Dresden -- from the calls for an exclusionary society that defines itself as anti-Islamic -- for the Bavarian center-right party Christian Social Union (CSU), the sister party of Merkel's CDU, to adopt this basic idea. The call of the Bavarians to make the status of a person in German society dependent on their religion is no different from the policies once pursued by the East German communist party, just with a different focus. And such ideas are apparently contagious: More than 800,000 voters in the prosperous state of Baden-Württemberg cast their ballots for the AfD. Despite widespread concerns about the East, other parts of Germany are likewise at risk.

The advance of the Eastern German desire for homogeneity has been paired with an extraordinary party transformation. The AfD was founded by Bernd Lucke as a protest against the European common currency. But this focus was shoved aside, along with many of the Western Germans who joined Lucke at the beginning, by the Saxony native Frauke Petry and others riding the wave of Islamophobia. She and her mostly Eastern German allies succeeded in combining that which initially seemed incompatible: the term "alternative," which was shaped by the left and West Germany, with the desire for homogeneity that dominates in the East. Their calls for direct democracy have become another tool to debase foreigners.

The AfD has adopted the 1989 slogan "We Are the People" and redirected it against a democratically elected government (one led by a chancellor from East Germany). The slogan "We Are One People" is used as a weapon against those from elsewhere. AfD followers were ecstatic when Merkel, frustrated by rising xenophobia, said "this is no longer my country." It provided fodder to those who wanted a different Germany -- a German Germany.

It is, of course, something of a curiosity that a political movement from Eastern Germany has become a serious threat to a chancellor from East Germany. And it wouldn't be particularly concerning either -- if there weren't a great deal more at stake. 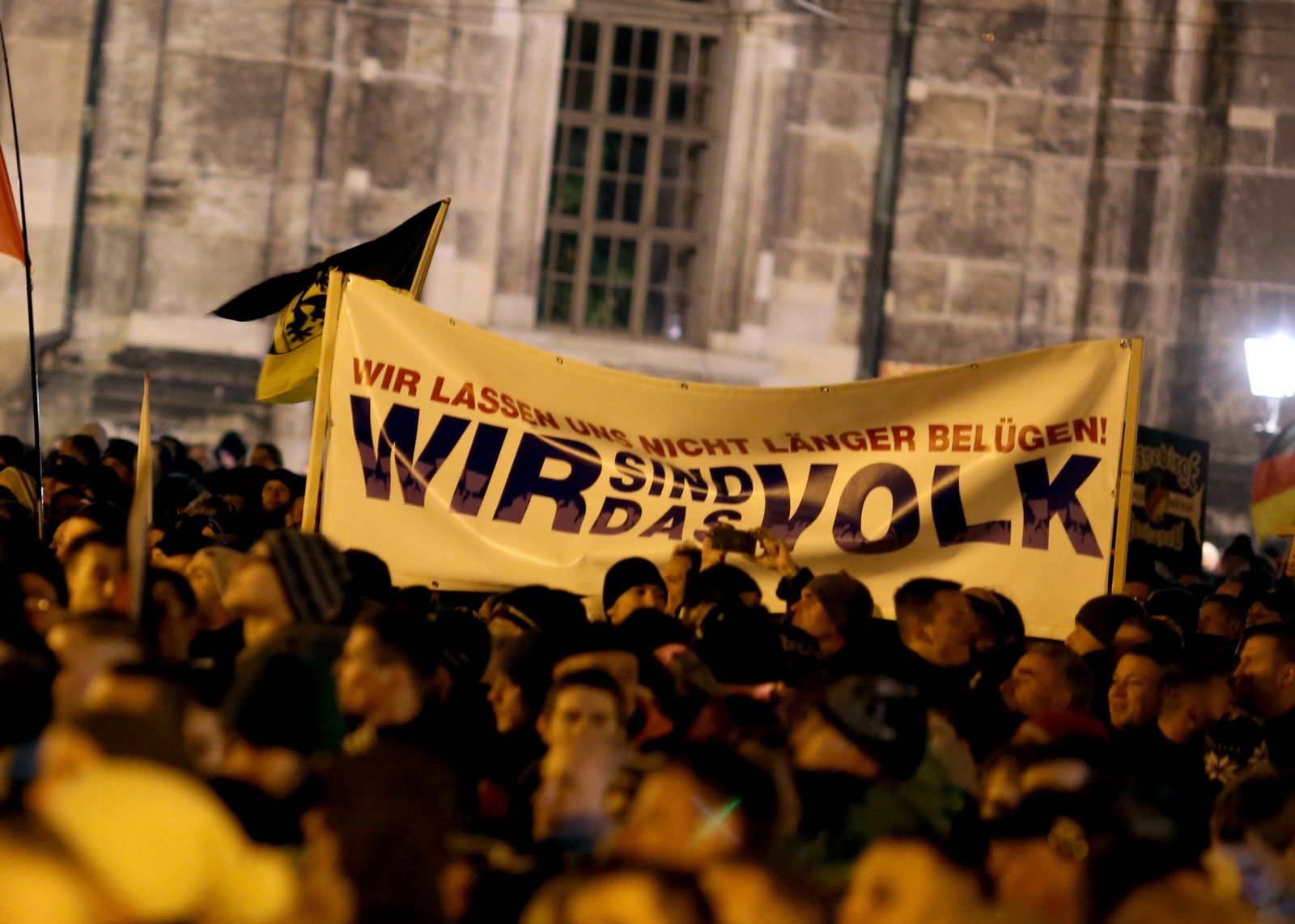 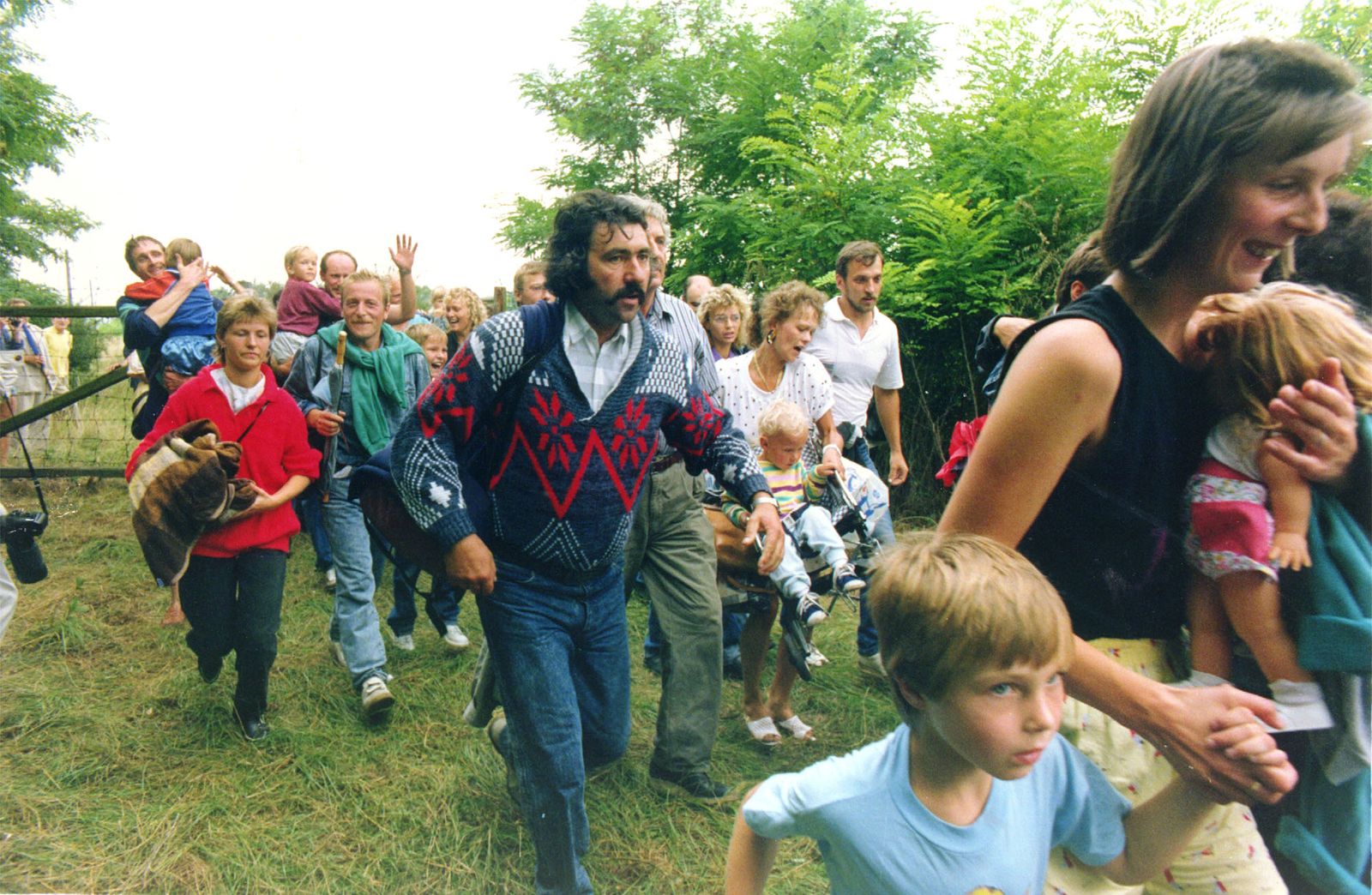 East Germans fleeing from Hungary to Austria on Aug. 19, 1989