US President Barack Obama's recent calls for "a world without nuclear weapons" may have been slammed by some critics as dangerously naive. But it has prompted German Foreign Minister Frank-Walter Steinmeier to come up with his own, more achievable goal: a Germany without American nuclear weapons.

"These weapons are militarily obsolete today," Steinmeier told SPIEGEL, explaining that he would take steps to ensure that the remaining US warheads "are removed from Germany." Disarmament involving "weapons in this category" also needs to be an issue on the agenda at the disarmament conference which the US is planning, Steinmeier said. 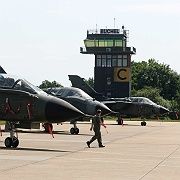 The German air force base at Büchel: American nuclear weapons are still stored in Germany.

With his remarks, Steinmeier, who is the center-left Social Democratic Party's official candidate for chancellor in September general elections, is taking the opposite stance from Chancellor Angela Merkel. The German leader told the German parliament, the Bundestag, shortly before the recent NATO summit, that the German government still fully supported the NATO doctrine of "nuclear sharing," whereby non-nuclear states such as Germany host third-party nukes in order to get more say in decision-making. Hosting American nuclear weapons secures Berlin's "influence in the defense alliance, including in this highly sensitive area," said Merkel, who was already aware of Obama's pending no-nukes initiative at the time.

Sources in the Defense Ministry, which is under the control of Merkel's center-right Christian Democrats, also said that only countries which host US nuclear bombs could "have a serious say" within NATO.

However opponents of nuclear sharing currently have a majority in the Bundestag. The far-left Left Party and the Greens want nuclear weapons out of Germany, as do the Social Democrats' defense experts. After Obama's speech, Guido Westerwelle, the leader of the business-friendly Free Democratic Party, also called for the warheads to be "removed."

During the Cold War, the then-West German government in Bonn managed to acquire a certain amount of decision-making power relating to American nuclear weapons. Thousands of US warheads were stored in West Germany at the time.

After German reunification in 1990, however, the US withdrew almost all its warheads from Europe. Nowadays US bombs are still stored in Belgium, the Netherlands, Italy and Turkey, as well as Germany, where they are kept in a Bundeswehr air base in Büchel in the state of Rhineland-Palatinate. Altogether around 100 American nukes are stored in Europe. However a commission of experts told US Defense Secretary Robert Gates last December that the warheads have "no military value" and that storing them safely consumes "enormous sums of money."

NATO's Nuclear Planning Group, which in the past only included countries with nuclear weapons, now includes all the alliance's member states except France. States such as Greece and Canada which abandoned nuclear sharing years ago, still participate in the group on equal terms.