They numbered in the hundreds and many wore yarmulkes, the traditional Jewish skull cap. At two different events over the weekend, demonstrators turned out in Berlin to protest against an anti-Semitic crime in the German capital that occurred on Tuesday, when unidentified youths attacked a 53-year-old rabbi in the German capital who had been wearing a yarmulke.

"We are not going to accept that people will be attacked on our streets because they can be visibly recognized as being Jewish," organizers of a flash mob protest on Saturday that attracted over 100 people wrote on their web page.

A second solidarity demonstration on Sunday attracted more than 1,000 people, according to organizers, including rabbi Daniel Alter, the man who had been attacked and only recently released from the hospital. "My cheekbone was broken," he told the crowd, "But these people did not break my will to promote interfaith dialog." He said Berlin remained a cosmopolitan and open city. "They can't take that away from us."

Last Tuesday's attack happened in front of the rabbi's young daughter. A man approached Alter and asked: "Are you a Jew?" Then the group of four men hit Alter in the face repeatedly. They shouted religious insults and threatened to kill his daughter. The rabbi said the attackers appeared to be of Arab descent.

The attack has generated a heated discussion in both the Jewish and Muslim communities in Germany. The head of Germany's Central Council of Muslims, Aiman Mazyek, said last week that Muslims had the "deepest disgust" for such attacks. "We hope the perpetrator is caught soon and is held accountable," he said. He said that Jews and Muslims had to stand together to fight violence of any type and "anti-Semitism, racism and xenophobia in our society."

The apparent involvement of Muslims has prompted the German Jewish community to apply pressure against the Muslim community to do more to stop anti-Semitism. In an interview with the Berliner Zeitung newspaper on Friday, the head of the Central Council of Jews in Germany, Dieter Graumann, called on Muslims to redouble such efforts. Graumann said he would welcome it the organizations "finally acted more decisively against the anti-Semitism within their own ranks." He said expressions of solidarity from the groups were "nice and with honest intentions," but that actions speak louder than words.

Responding several days later, Ali Kizilkaya, the head of the Coordination Council of Muslims in Germany (KRM), told the Berliner Zeitung on Monday there was no need for the Muslim community to undertake additional efforts to combat anti-Semitism. "An attack like that is an attack on everyone," Kizilkaya told the paper. "Society has to do something about it," he said, adding that Muslims don't need to be taught anything. "Anti-Semitism is incompatible with Islam," he said. He also said that if one raised the issue of anti-Semitism, then one must also address Islamophobia, because both are xenophobic.

Since last Tuesday's attack, Jewish leaders have called for greater caution among the faithful. Gideon Joffe, the head of Berlin's Jewish community, warned against wearing a yarmulke in parts of the German capital. "I would not today recommend that Jews wear kippas in every part of Berlin," he said. In neighboring Potsdam, where the Abraham Geiger Kolleg trains rabbis, school officials have advised students that they should instead choose "inconspicuous head coverings." The school's rector, Walter Homolka, told the Berliner Morgenpost newspaper, "One is safe when that person is not visible as a Jew."

Another Berlin rabbi, Walter Rothschild, spoke in an interview last week of a "new dimension" in anti-Semitic attacks in Berlin, saying he had recently been attacked and that he was getting insulting emails and had stopped wearing the yarmulke in public.

Police have not yet detained any suspects in the case, but it has already led to a vocal debate about xenophobic crimes in Germany.

The chairwoman of the Amadeu Antonio Foundation, an anti-racism organization, warned last week that attacks were increasing in German cities and populous areas. "There have been more physical attacks on Jews than we have seen in recent years -- especially in metropolitan areas or large cities," said Anetta Kahane.

Despite a tense atmosphere between Jewish and Muslim leaders in recent days, experts say the main threat to Jews in Germany comes from the right-wing extremist scene rather than from Muslim immigrants.

Researcher Juliane Wetzel, the co-author of a report on anti-Semitism commissioned by the German parliament, has written that "the vast majority" of crimes committed against Jews in the past decade have been attributable to right-wing extremist. She said that although the threat of anti-Semitic violence committed by Arab immigrants should not be underestimated, there wasn't enough data to assess the frequency of Muslim violence against Jews in Germany.

Despite a recent downward trend, there were many anti-Semitic attacks in the first half of 2012. After a member of the Germany's Left Party submitted a request for information in parliament, the government released data indicating that 13 violent anti-Semitic crimes have been registered so far, with 11 of those having been perpetrated by individuals deemed by investigators to be right-wing extremists. In total, Germany's Federal Bureau of Criminal Investigation has counted 436 crimes with anti-Semitic links this year. Of those, 85 were anti-Semitic propaganda crimes. 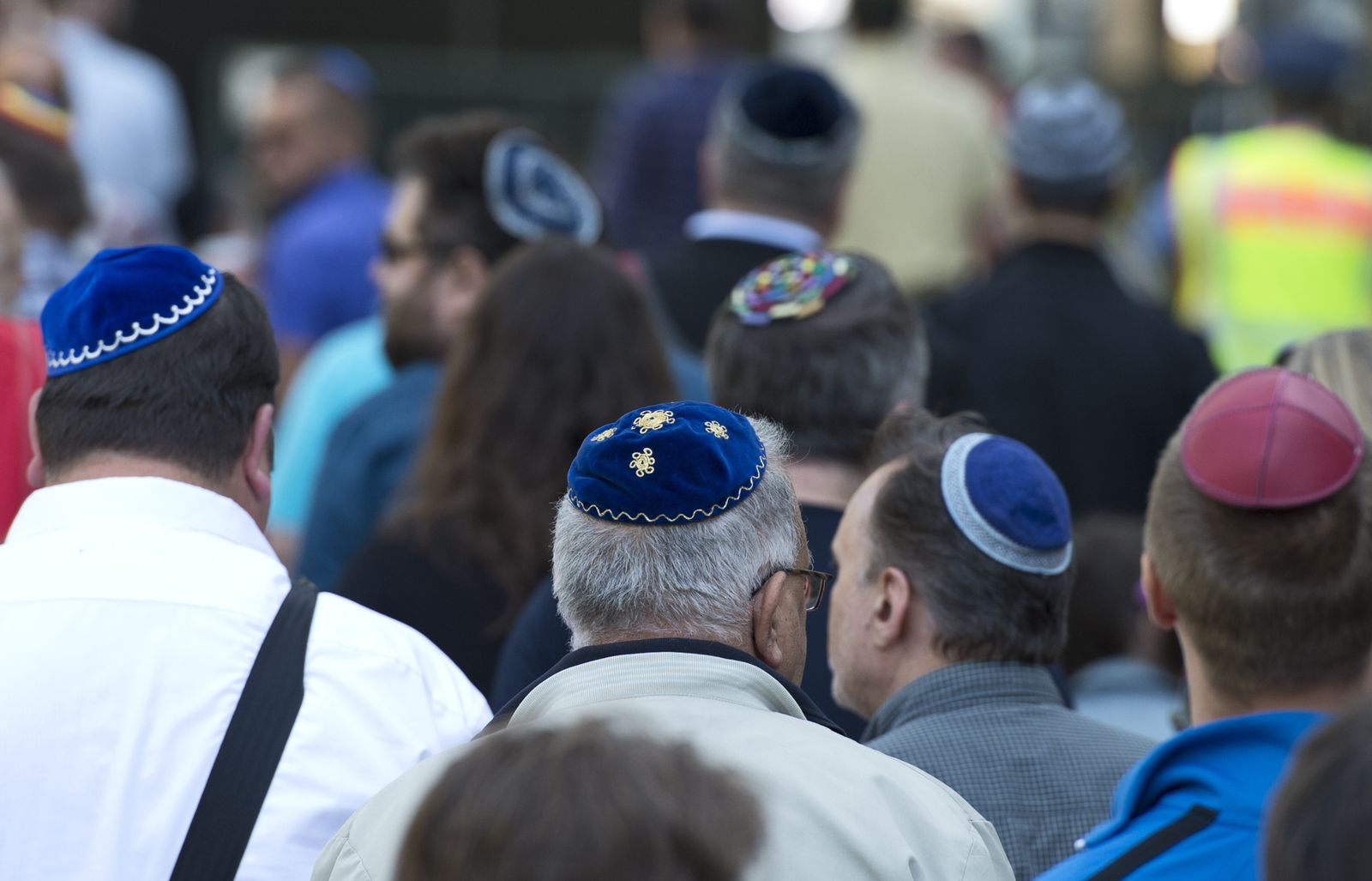 Participants in a flash mob against anti-Semitism march down Berlin's Kurfürstendamm boulevard on Saturday.