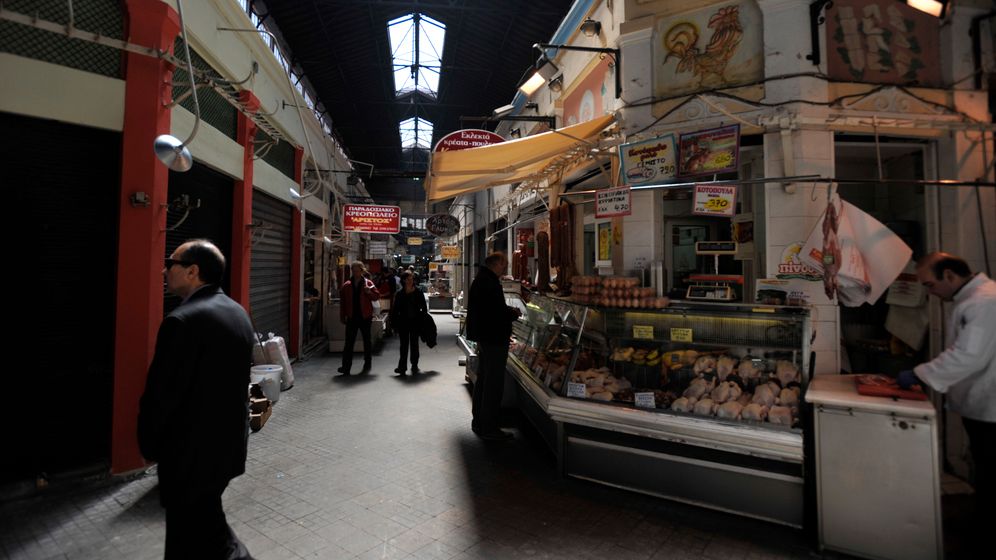 In October 2011, when the German parliament, the Bundestag, approved additional billions in aid for Greece and other European Union countries, Thalia Paraskeva, 24, decided to leave her homeland. She packed warm boots, a few dresses, a jacket -- and a Greek-German dictionary.

For months, the newspapers in Athens had printed cartoons depicting the Germans as Nazis, concentration camp guards and euro-zone imperialists who allow their debtors to bleed to death. But Paraskeva's friends and relatives told a different story. They raved about a country where there was work for everyone who wanted to work. They told her about the uncles and aunts who had left Greece for "Germania" after the war and found happiness there. Most of all, however, they raved about Berlin.

Paraskeva had received a degree in graphic design in Athens. But then the crisis arrived, and no one wanted to hire her. She waited tables and earned a little money with odd jobs, until even those jobs fizzled out. Anything is better than Athens, she thought, and booked a ticket to Berlin.

Many Greeks like Paraskeva have made their way to Germany, despite the country's poor image in their homeland. About 25,000 new Greek immigrants registered with German authorities last year, twice as many as in 2010. These figures, says Hamburg immigration expert Vassilis Tsianos, don't include those immigrants who have not yet registered with the German authorities, which is why he estimates there were 60,000 new Greek immigrants in Germany last year. Most are economic refugees with degrees: attorneys, engineers and architects. Equipped with equal amounts of courage and naiveté, they hope to find the same opportunities that awaited Greek guest workers who arrived with the immigration waves of the 1960s and 1970s.

Many go to Berlin because they assume that the capital, like London or Paris, is an affluent place. But only after they've arrived do they realize that Berlin, the dream destination of young southern Europeans, is in fact a poor city with a tight labor market.

Thalia Paraskeva arrived in Berlin in November. At first, the graphic designer stayed with a Greek friend who had also fled from the crisis. But even the search for an apartment proved to be difficult. "We don't rent to Greeks," she was often told.

Paraskeva quickly realized how much the idea of the European Union as a common market in which everyone has the right to work in any member state is really worth. Whenever she applied for a job, she was turned down because of her lack of German skills.

Because she couldn't afford a language course, she decided to look for work in the Greek community. She met Antonia Karali, who owns a Greek restaurant in Berlin's Friedenau district, and she now has a job in the kitchen.

Pigi Mourmouri, who works for a Christian social welfare organization in the city's gritty Neukölln district, is familiar with plenty of cases like Paraskeva's. As a Greek social worker in Berlin, she is now in great demand. Children of the Greek crisis are constantly turning up in her office.

Griton Lolis, for example, came to Germany three months ago. In Athens, he had earned a degree in business with high honors, but then the euro crisis dealt a devastating blow to the local labor market.

The first company where he worked as a bookkeeper went out of business, and when he found another job, his new employer soon embarked on mass layoffs.

In Berlin, he could count himself lucky to have got a spot in a German language course at an adult education center. He is still living off his savings but he confesses that those funds are dwindling.

Hard to Gain a Foothold

The new arrivals cannot expect any help from the German government. Chancellor Angela Merkel, leader of the center-right Christian Democratic Union (CDU), likes to invoke a sense of "European solidarity" that makes it imperative for Germany to support the Greek economy. But she isn't about to offer the same support for refugees from the Greek crisis.

In late February, the German Labor Ministry issued a directive that makes it harder for EU citizens to obtain the German unemployment benefits colloquially known as Hartz IV. The move was intended to deter penniless immigrants from southern Europe. It's also very difficult for non-Germans to receive funding for language courses. "Without support, it's almost impossible to gain a foothold in Germany," says social worker Pigi Mourmouri.

The example of the college-educated Greek economic migrants shows how far Germany still is from being the modern country of immigration that many people would like it to be. Instead of accepting the new immigrants and helping them to integrate into German society, as it tried to do in the past for Turkish immigrants, Germany is only erecting higher barriers. It is hardly taking advantage of the potential offered by well-educated foreign workers.

German policy officially advocates a united Europe, open borders and a uniform market. But the country is somewhat reluctant to shoulder the burdens that result from such a policy.

Elke Ferner, the deputy leader of the center-left Social Democratic Party (SPD) in the Bundestag, is critical of the country's "relapse" to the policies of the 1950s, when Germany "sealed itself off." Ulrich Schneider, the managing director of the German Parity Welfare Association, an umbrella group for German social welfare charities, says that the country is sending a "fatal signal in terms of European and social policy."

In their plight, many new immigrants turn to the local Greek community for support. But the established community, which consists largely of former guest workers and their children, is at odds over what to do with the young newcomers. As a result, a rift has formed within German-Greek communities, within associations and even within Antonia Karali's restaurant.

There are those who want to help, like the members of Exantas, an association for Greeks living in Berlin. They used to meet at Karali's restaurant to organize readings and concerts, but now there is only one subject at their meetings: the crisis. "When we arrived in Germany, we had employment contracts and we were needed," says Kostas Kouvelis, the club's chairman. "But the ones arriving today have almost nothing and need our help." He and his colleagues plan to establish a service where people can publicize job opportunities and are also working on a website with advice for the newcomers.

But there are others who don't see why they should feel responsible for the young immigrants, just because their parents and grandparents once emigrated from Greece. They have lived in Germany for decades, have built lives there and are suddenly expected to justify the economic policies of their country of origin. Some of Karali's guests say that the immigrants share part of the blame for the crisis in Greece and should be left to their own devices.

A resentful tone prevails among some Germans of Greek heritage, prompting social scientists like Vassilis Tsianos of the University of Hamburg to warn against growing aggression. "The communities are disintegrating," says Nikolaos Athanassiadis of the Association of Greek Communities.

The members of the Exantas association would like to help their fellow Greeks. But what can they do for someone like 31-year-old civil engineer Vasileios Tzimiropoulus, who speaks four languages but only has a rudimentary command of German? Because Greece no longer needed people like Tzimiropoulus in times of austerity, he came to Germany. "You'll find a job anywhere, with your qualifications," people in Greece had predicted. But now he knows that they were wrong.

Young immigrants like Tzimiropoulus are organizing. A group called "Greek Berliners" has set up a Facebook page where members can share experiences about how they are doing in Berlin, as well as help each other find apartments and jobs.

Graphic designer Paraskeva has also joined the group. She says she doesn't believe she'll find a job through Facebook. "But at least I'm no longer alone with my problems."