The audience had already sat down for a scheduled event on the "Intercultural Weeks" program in Frankfurt, when suddenly three men in white masks with a boom box stormed into the lobby of the municipal library. They danced through the rows to techno music, holding up banners reading: "Blast Away Multiculturalism."

The appearance on Oct. 30 lasted less than a minute before a security guard escorted the troublemakers out of the room.

A video of the event has since created a sensation. The clip by the right-wing activists, who call themselves Identitäre Bewegung Deutschland, or the "German Identity Movement," has been viewed online more than 21,000 times. More than 30 local groups affiliated with the previously unknown movement have since established pages on Facebook, from Stuttgart in the south to Essen in the west and East Frisia in the north.

A new generation of right-wing extremists is trying its hand at an image makeover, emulating the methods of the leftist protest culture. In addition to the "Identity Movement," authorities are focusing on another group called the Die Unsterblichen, or "The Immortals." Their approach is always the same: The activists put on white masks similar to the ones used by people identified with the Internet collective "Anonymous," hold up banners and stage a torchlight procession through a city at night. Then a short film with a dramatic soundtrack and right-wing slogans is placed online.

The method turns a local campaign that hardly attracted any notice into a theatrical clip capable of drawing nationwide attention. Seemingly harmless hoodies and techno music replace the combat boots and shaved-head aesthetic of earlier neo-Nazi generations. But the slogans are often the same.

"The dangerous thing about it is the symbolic seizure of power on the street," says Johannes Radke, who co-wrote a book called "New Nazis" with Toralf Staud. "The Nazis use it to send a clear message: There are many of us, we are militant and we can turn up everywhere and at any time."

The pioneer of this new form of political action was the right-wing extremist group Wiederstandsbewegung in Südbrandenburg, or "Resistance Movement in South Brandenburg," which also used the name "The Immortals" and was banned by the Interior Ministry in the eastern state of Brandenburg last July. At the time, more than 260 law enforcement officers searched 27 apartments, including that of Marcel F. from the town of Lübbenau near Berlin. The suspect, an "active neo-Nazi for years," the Brandenburg domestic intelligence agency wrote in 2011, was the group's "central actor and generator of ideas."

Despite the Brandenburg ban and investigations in other German states, there have been recurrent torchlight processions since then. In fact, there have been several dozen across Germany, according to authorities, including events in Halberstadt in the eastern state of Saxony-Anhalt, in Donaueschingen in the southwestern state of Baden-Württemberg, in the northeastern port city of Rostock and in Hamburg's Harburg neighborhood.

Skillful camera work, the choice of narrow streets and clever editing often create the impression that there is an entire army of militant torchbearers, even though the real count is usually between 50 and 100, and sometimes even as small as 10. But once they are on the Internet, the videos can generate tens of thousands of clicks and enthusiastic comments.

In the past, apolitical groups used the flash mob approach to organize surprising performances in public. But now right-wing extremists have adopted the method for their purposes, usually making the arrangements secretly through internal distribution lists and text messages. If a supporter reveals the plans on Facebook, for example, the event is cancelled. In this way, the right-wing extremists avoid protests by leftists and bans by the authorities. The conspiratorial nature of these events also has its allure, enhancing the experience for participants.

Appealing to a Young Audience

The people behind the masks are often potentially violent members of the right-wing extremist community. Prominent neo-Nazi figures are also believed to be involved in the "Identity Movement," which is primarily a virtual alliance. The logo -- a stylized version of the Greek letter lambda in black against a yellow background -- and the slogan "We Are the Good Ones" have a high recognition value in the right-wing extremist community, as do the white masks worn by "The Immortals."

Members of the neo-Nazi National Democratic Party of Germany (NPD) and its youth organization, the Young National Democrats (JN), are now enthusiastically discussing ways to use image and activism more effectively. The old-school members of the far right have a favorable opinion of "The Immortals" and the "Identity Movement" because they are able to appeal to an especially young audience, including people who had little connection to radical right-wing ideas in the past. As head of the Brandenburg state intelligence agency Winfriede Schreiber concedes: "This form of action has already taken on a life of its own."

"The Immortals" main website operates on foreign servers. The site was revised in January and now offers the option of downloading flyers, together with concrete recommendations on specific action to take. Anna Groß of the initiative no-nazi.net views the online presence of the group with concern. "The community is becoming more action-oriented and therefore also more militant," even if it sometimes takes pains to make its appearances seem harmless so as to obfuscate its true intentions, she says.

Take, for example, the person in a bear costume who was seen strolling through the northern city of Hannover, approaching unsuspecting immigrants, shaking their hands and saying goodbye with a friendly wave. He seemed harmless enough, until a video of the scene was posted on the Internet, complete with cheerful background music, which included a devious script describing the "deportation bear's" xenophobic intentions.

All the same, two of the bear costumes have now been confiscated, and the police launched an investigation of the suspected culprits. Their organization, neo-Nazi group "A Better Hannover," was banned. 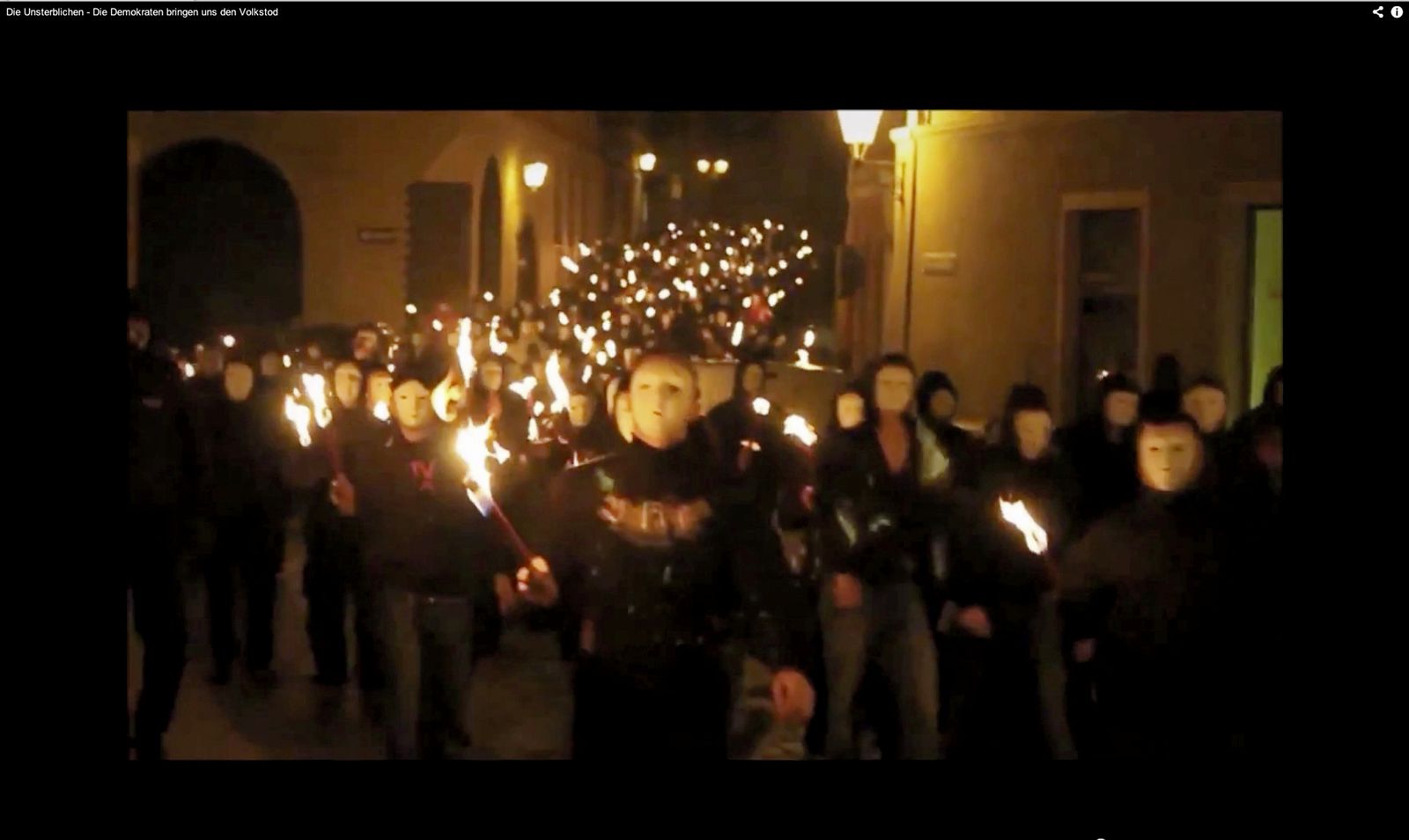 A screenshot of a YouTube video by far-right group the "Immortals."