It was an unlikely spot for music history to be written. The scene was room 157 of a state courthouse in the Western German town of Düsseldorf on Wednesday. There, lawyers for the two sides were asked to present their sides of the story -- a story which pitted the Zappa Family Trust against the annual German music festival Zappanale.

It is far from the first courtroom appearance for the Los Angeles-based Zappa Family Trust (ZFT), which is headed up by rock legend Frank Zappa's widow Gail. Indeed, the group has set its German and American lawyers on all manner of different bands and cover groups that have dedicated themselves to Zappa's musical legacy.

The case against the founders of Zappanale, which takes place every year in the north-eastern German town of Bad Doberan, is more complicated. It is a case about trademark rights and copyright -- of Zappa songs, of Zappa products, and of the famous Zappa moustache, a slightly altered version of which the not-for-profit Zappanale uses in its promotional materials. The Düsseldorf legal practice of Reimann, Osterrieth, Köhler, Haft argues on behalf of the Zappa Family Trust that the Zappanale should not be allowed to use the Zappa name on any of the T-shirts or CD's sold at the festival. Indeed, the lawyers argue, the festival shouldn't be able to use the Zappa name at all.

'Hurdles in Our Path'

In November, the plaintiffs demanded that the organizers of the Zappanale be forced to pay a €250,000 penalty or be sent to jail for two years should the festival or the related "Arf-Society" refuse to comply. Despite the threat, 18 bands took to the stage in the 19th annual Zappanale last weekend.

Following the Wednesday arguments in Düsseldorf, it is now up to the court to find an adequate solution -- one that weighs both the interests of Zappa's legacy and that of the Zappanale -- the "biggest Zappa festival in the world," the organizers claim. The Zappanale people also claim that Frank Zappa himself gave his backing to the festival during a meeting in the 1990s in Amsterdam. Some in Zappa's family will deny the meeting ever took place, but Wolfhard Kutz, the Zappanale treasurer, says it is time for Gail Zappa to give up.

"His widow should finally stop putting hurdles in our path and help us further promote this fantastic music," he says. Kutz, who grew up in East Germany, was even persecuted by the East German secret police, the Stasi, for being a Zappa fan. In his file, which SPIEGEL has seen, it says that Kutz "knows how to influence the youth with Zappa."

Such moral arguments, though, carry little weight in the courtroom. But the Zappanale may not need them. Early on in the proceedings, the defendants pointed out that the Zappa Family Trust trademark may not still be valid in Germany. The ZFT only sells its products online and buyers may only pay in US dollars. There is no ZFT office anywhere in Europe.

"That makes things interesting," says Zappanale spokesman Thomas Dippel. Dippel is also president of the Arf Society, which is intimately involved in organizing the Zappanale. He and his lawyers have now filed a counter-claim asking the court to declare the Zappa trademark to have expired, retroactive to August 1, 2007. If trademarks aren't used for five years, they are lost, and Zappanale argues that the Zappa Family Trust has not been using the trademark in Germany. Were the court to agree, Zappa's moustache would become the property of Zappanale. ZFT lawyers have responded by asking for another hearing, one which Gail Zappa herself might fly in for.

'We Are Zappa Fans'

The two sides now have some six weeks to come up with an out-of-court settlement. And the Zappa Family Trust may be willing to compromise. ZFT lawyers now say that the Zappanale can use the Zappa name if they brand the festival as "Zappa music and more." Johannes Vogel, a lawyer for Zappanale, isn't convinced. "They want to see money. That's it," he told SPIEGEL ONLINE. 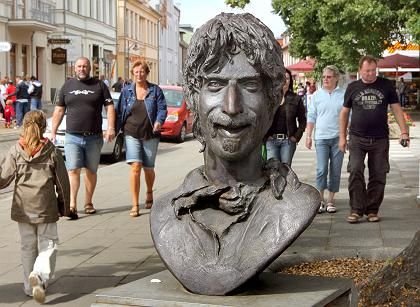 A bust of Frank Zappa decorates the town center of Bad Doberan, where the Zappanale is held every year.

Dippel and Kutz, for their part, insist that they are not interested in denying Gail Zappa's right to protect the Zappa legacy from abuse. The festival pays the requisite fees for each and every song performed in Bad Doberan. Organizers also make sure that all taxes are covered for the international numbers that fly in for the party, many coming from as far away as the US, South America and Asia. Indeed, each year the Zappanale doesn't lose money is considered a success. "We haven't become millionaires so far," says Dippel. "We are Zappa fans."

The festival has, however, begun looking beyond the site in Bad Doberan. Last week, Zappanale organizers put on a show at St. Katharinen church in Hamburg called "Zappa Plays for Bach." Some 600 guests showed up for a performance of variations on the famous Goldberg Variations. Indeed, improvisation is one quality Johann Sebastian Bach (1685-1750) shares with his colleague Frank Zappa (1940-1993).

All proceeds from the concert went to the Hamburg foundation Stiftung Johann Sebastian, which is trying to raise money to recondition a Barock organ on which Bach played in 1720. And it was a fantastic show -- with nine musicians from the Florida group Bogus Pomp playing together with the former Zappa saxophone player Napoleon Murphy Brock putting on pieces ranging from "Absolutely Free Medley" to "Chunga's Revenge" to "Idiot Bastard Son."

But prior to the show, the Stiftung Johann Sebastian also received a letter from Zappa Family Trust lawyers threatening legal measures if the performance went ahead. The ZFT mistakenly thought that the church was planning a performance of Zappa's orchestral work "Yellowshark," and the letter warned that Gail Zappa had not given her permission for such a performance.

'Victory of Music over Legalese'

"It is always difficult to deal with widows who manage the legacy of their husbands," says Karsten Jahnke, one of Germany's largest event organizers. All too often, he says, money becomes the primary goal.

Even Stanley Jackson Zappa, a nephew of Frank Zappa's who played tenor saxophone at this year's Zappanale finds his aunt's efforts "crazy and sick." A big band collaboration between a German radio station and the London conductor Colin Towns likewise had to be torpedoed. The distribution of a CD with Zappa arrangements was stopped after a legal challenge.

"Bach and Zappa are gods for me. A combination of the two is a fantastic idea I think," says experienced concert organizer Fritz Rau, who came to Hamburg for the show. Rau has had his hand in tours by such big names as the Rolling Stones and Bob Dylan and also helped out with a Frank Zappa tour once. Rau hopes that the Düsseldorf trial will result in a "victory of music over legalese."

When it comes to the Hamburg concert, though, Gail Zappa proved quick to back down. The organizers of the St. Katharinen concert recently received an e-mail from her with the subject line "Hot Piping Organs." "It is a wonderful idea to preserve such an instrument, even if Frank Zappa was never in this church," she wrote.